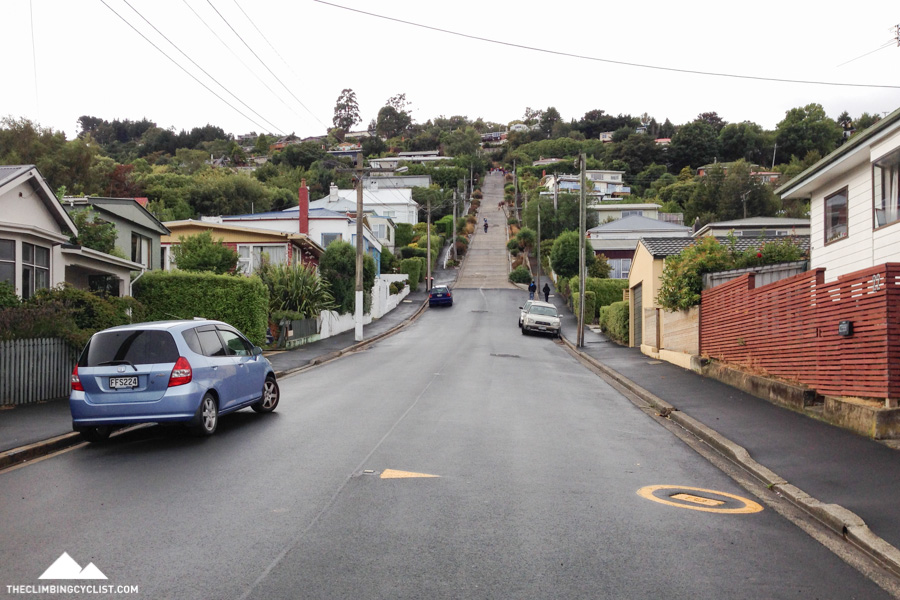 This is the fifth of six blog posts about a recent two-week trip to New Zealand. Click through to read part one, about riding in the Port Hills of Christchurch; part two, about riding between Franz Josef Glacier and Fox Glacier; part three, about climbing The Remarkables; and part four, about climbing Coronet Peak.

When we left Queenstown on the day I climbed Coronet Peak we had already been planning to head to Dunedin. But when I remembered that the city is home to Baldwin Street, “the world’s steepest street”, it made me even more excited to visit.

Straight up front: I didn’t get to ride my bike up this beast of a street, but as you’ll see in the video below I did get a chance to walk up it and see just how steep it actually is*.

At well over 30% gradient this is just a stupidly hard piece of road to ride up. I’ve ridden a few pinches that steep — two in the Hobart Dirty Dozen alone — and they were much shorter than this.

As mentioned in the video, I think I would have struggled to make it up in one go, even with a 34×28 setup on my bike. And doing it when the road was wet? Yeah, probably not a great idea.

It’s worth noting that there is some debate about whether Baldwin Street is indeed the world’s steepest street. Wikipedia lists it as the “world’s steepest residential street”, contrasting it with roads such as the Waipio Valley Road on Hawaii’s Big Island, which reportedly touches 40% or more but isn’t a residential street. And then there are ‘streets’ like the Templestowe Hill climb in Melbourne’s north-eastern suburbs, which also reaches 40%, but which isn’t really a street any more.

Either way, there’s no doubt Baldwin Street is a fearsome prospect when you’re standing at the bottom looking up. And when the gradient kicks to above 30% and the road surface changes to concrete — bitumen can melt and slide down the hill on hot days — you’re looking at the limits of what’s possible for your average recreational cyclist.

Here’s a great little video featuring a colleague of mine at CyclingTips, Dave Everett, when he attempted to climb Baldwin Street by bike a few years back.

We only stayed in Dunedin for the one night so I didn’t get another opportunity to climb the hill, sadly. I suppose I’ll have to come back and give it a shot at some point. Another thing I’d be keen to do in Dunedin is ride North Road out of the city.

Baldwin Street comes off of North Road, a road that heads north east and then north away from town, eventually joining up with the main highway towards Christchurch. My partner Sharon and I drove that way out to the highway when we left Dunedin, accidentally discovering this beautifully hilly road in the process.

We saw barely a handful of cars along the way, and the narrow road was simply stunning as it climbed this hill then wound its way on to Mt. Cargill Road down towards Waitati. Strava’s Global Heatmap suggests this route is a popular one among local cyclists and I can see why. If you’re in town I’d definitely recommend checking it out. I certainly will on my next visit.

From Dunedin, Sharon and I made our way north to Christchurch via a few days in Methven, Hanmer Springs and Kaikoura. My final ride in New Zealand came on the last day of our trip — another visit to Christchurch’s Port Hills.

*For those of you that are wondering, the app I’m using in the video is called Gradient Level and it cost less than $2 on the iOS App Store.