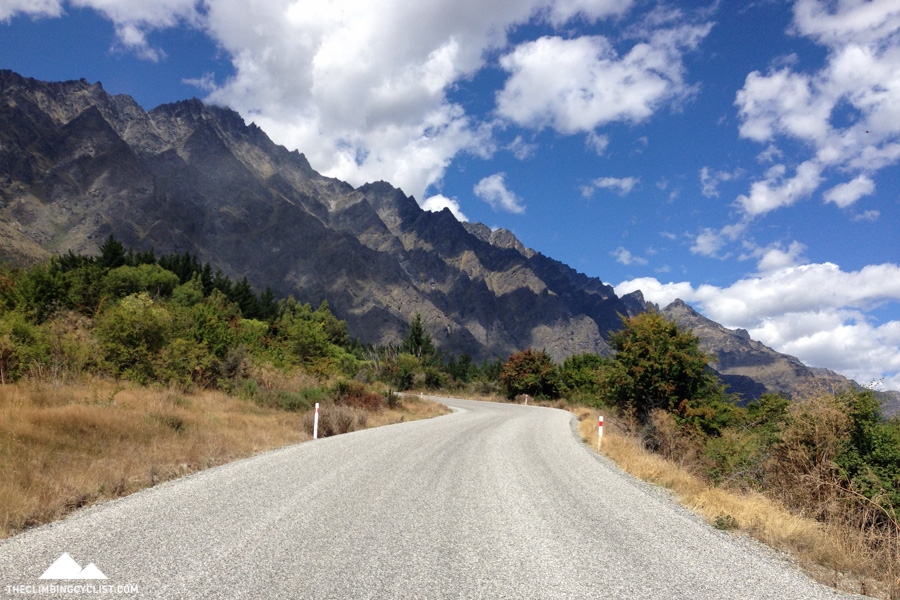 This is the third of six blog posts about a recent two-week trip to New Zealand. Click through to read part one, about riding in the Port Hills of Christchurch, and part two, about riding between Franz Josef Glacier and Fox Glacier.

On my first trip to New Zealand back in 2011, I remember driving past the turn-off to The Remarkables ski field near Queenstown and thinking to myself “I’m going to ride up there one day”. I didn’t have time during that particular trip four years ago, but this time around I made sure I did.

After spending some time in glacier country on the west coast of New Zealand’s South Island, we headed over the incredible Haast Pass through to Queenstown and beyond. It took us a couple days until we were able to find accommodation near Queenstown — the place was booked out — but when we did, I made a trip to the Remarkables my first priority.

The Remarkables is a mountain range that looms impressively and somewhat ominously over Queenstown and the surrounding area. In winter it’s one of several popular destinations for snow-goers but in summer, from what I can tell, it’s a bit of a ghost town.

I knew from some preliminary research that the climb was largely unsealed and that I would need to hire a mountain bike for this particular adventure. When I told the woman at the bike hire place where I was planning to ride, she was more than a little confused — “why would you ride up there when you’ve got so much amazing downhill MTBing so close to Queenstown?!”, was the gist of her reply.

I explained that I do almost all of my riding on the road and that I would be climbing The Remarkables on my road bike if I could. Besides, I explained, I was more interested in the way up than the way down.

As I went to leave the lady at the bike shop threw in a final curve ball — apparently the road to ‘Remarks’ was closed after only about 4km. She suggested I visit Coronet Peak instead.

Having already climbed Coronet Peak in the past, and having planned to do it the following day on my roadie, I was keen to press on. I figured I’d see how far up Remarks I could bet before being told to turn around.

The short ride out to the start of the climb was a nervous one. I knew full well what I was in for — more than 13km at 10%, the majority of that on gravel — and I was trying to tell myself to approach the climb in chunks, rather than as one, long, stupidly hard ascent.

I knew the climb was going to be something special when, after just 2km, I was already struggling … and I hadn’t even reached the start of the gravel yet. I tried to enjoy the experience as I climbed the stunning switchbacks that define those opening kilometres and as the views over Queenstown and Lake Wakatipu only got better and better.

The gravel started after 3.7km and I was already in the lowest gear on the bike. This was going to be a long climb.

As I’d been warned about, there was a sign after 4km saying that visitors weren’t allowed any further while construction was in progress up at the ski field. After some deliberation I decided to push on through the open gate, telling myself I’d turn around as soon as I reached a closed gate or someone told me I couldn’t go any further.

I only saw a couple of construction vehicles on the way up and each time I pulled right over to the side of the road to ensure I wasn’t in their way and wasn’t in any danger. The advantage of it being so quiet up there was that I could hear and see each vehicle more than a minute before it reached me. I expected to be told to turn around each time I saw a vehicle, but everyone I saw just smiled to me and waved, so I decided to push on.

The Strava profile for the Remarkables climb indicates several spots where the gradient lets up and you get a brief rest. From experience I can tell you those moments of rest felt very rare and that the sections between them felt long and interminably steep.

It was about 30 degrees on the mountain and with literally no shade the entire way up, I was sweating buckets. I battled to keep moving at 6-7km/h on the loose, sandy surface. Occasionally I’d reach a long section of rocky gravel, with rocks as big as my fist. It was a constant battle to find a good line through those sections — I really didn’t want to be zig-zagging all over the road but I also needed a line that would allow me to maintain traction.

I’m sure there are some of you reading this thinking “how hard could it be — I bet I could do this on a road bike”. On some sections of the climb a road bike might have been fine (on the way up, at least) but there were parts of the ascent, at close to 20% on a loose corrugated, gravel-covered surface, where even riding an MTB made me feel under-equipped. Seriously: don’t try this on a road bike, or even a CX bike.

I stopped plenty of times on the way up. I’d like to say that this was because I kept wanting to take photos of the magnificent views but that would only be partially true. In reality I couldn’t have got to the top without stopping if I tried and taking photos provided a great chance for me to catch my breath.

The gradient barely seemed to let up throughout the entire climb and I had to be content with working away at 6km/h in the smallest gear on the bike, inching my way up the mountain metre by gravelly metre.

I got my first views of the ski field after 9km of climbing before the road turned away in a another series of stupidly steep switchbacks. There was a brief false-flat after 10.9km where the road even went downhill for a very brief moment, before one final push to the summit.

I didn’t stick around long at the top — I got cold quite quickly and besides the views from the ski village, as impressive as they were, weren’t as nice as they had been on the way up. I threw my jacket on and began the bumpy, hair-raising descent.

I stopped a number of times on the way down, to take some more photos, and to take stock of what I’d managed to achieve. Quite simply, I can’t remember riding a tougher, more sustained climb.

Mt. Baw Baw is the obvious comparison, but the steep bit of that’s ‘only’ 6.5km at 11% and I can get up that without stopping. The first kilometre of Mt. William after the gate is brutally hard as well, but that’s only short. The Remarkables climb is on another level.

I kept thinking “this would be an extremely tough climb if it was fully sealed”; the fact that it’s loose gravel most of the way up makes it ridiculous. 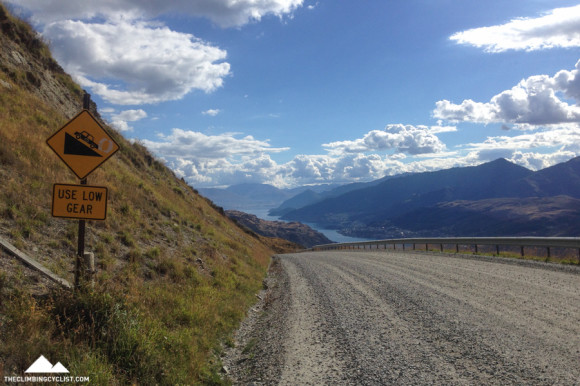 Given how popular The Remarkables is as a ski field, I figured there must be a case for sealing the entire road at some point. I asked Paul Anderson, CEO of NZSki (the organisation that runs the resort) whether any such plans were in place.

“Sealing the remaining 9km of The Remarkables road remains on NZSki’s project list for the coming years,” he said. “However we don’t yet have a definitive date for completing the work.”

When it does get sealed, I really hope the Tour of Southland will have a mountain-top finish there. That would be some race.

In the meantime, if you’re in Queenstown and looking for an almighty challenge, get yourself a MTB and give the climb a go. It’s one of the hardest things I’ve ever done on a bike but also one of the most memorable, if only because of the breathtaking views.

In the next instalment of my Cycling New Zealand 2015 series I make a return to Coronet Peak but until then, be sure to check out the video I shot during the climb and the photos I took throughout the ride.