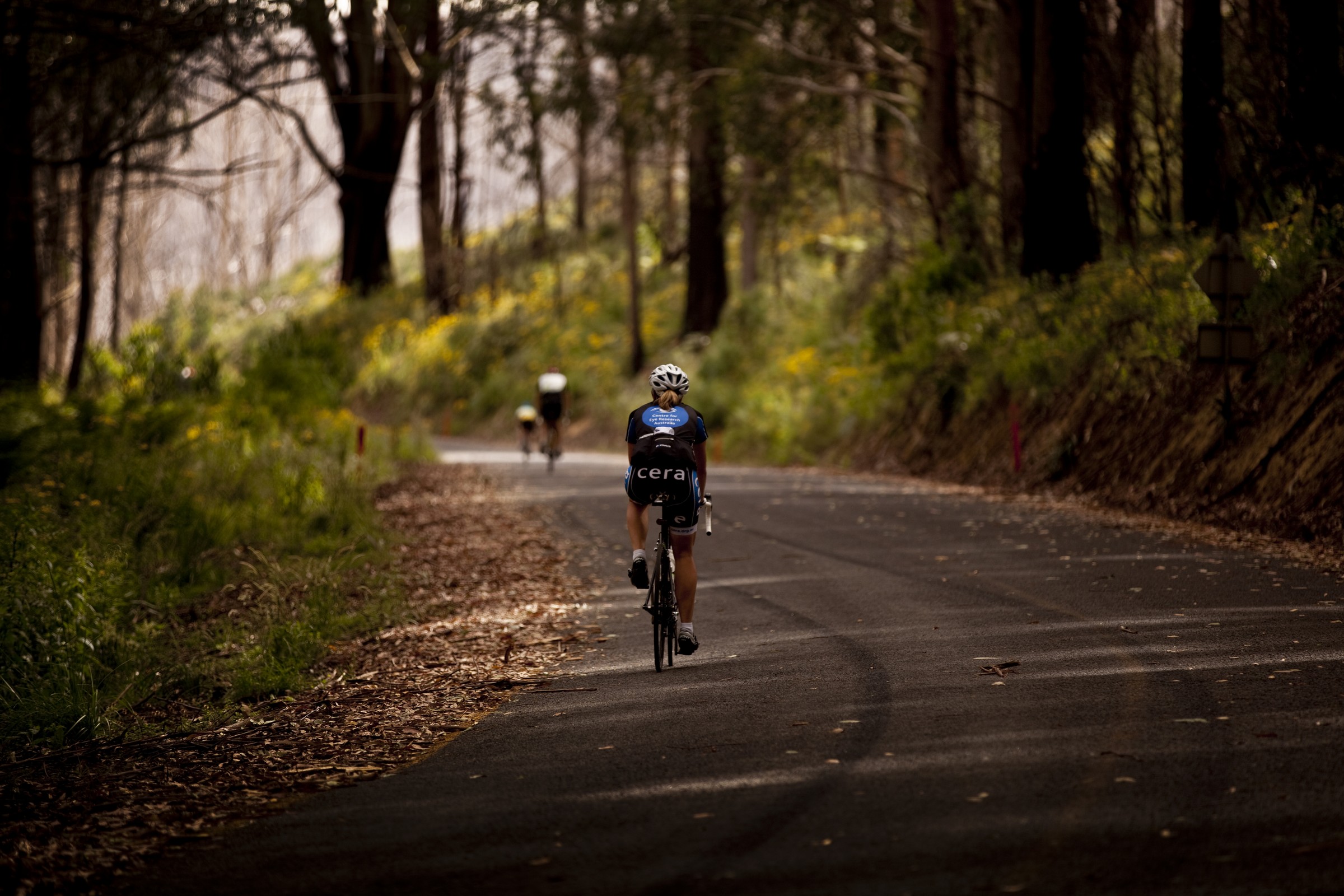 There’s great satisfaction in completing a climb for the first time. But after many times up the same rise, you might be looking for other ways to create a sense of achievement. In this guest post, George Mallory takes us through some of the games we can play while climbing and how they can make us stronger cyclists.

We road cyclists play a variety of games. For a start there’s racing — from club crits to the Tour de France –then there’s the challenge of gran fondos and Audax-style endurance events, and, of course, there’s the simple joy of cruising down Beach Road for a coffee and a chat with your mates.

And then there’s the challenge of deliberately riding up hills.

When it comes to racing, the criteria for success are clearly defined — first across the line, or the rider with the fastest time wins. Hill climbing, by contrast, allows non-professional ‘weekend warriors’ — i.e. most of us — to informally compete, at a time of our choosing, in a game of our choosing.

So what are the hill climbing games we can play? And what are the parameters and criteria for measuring success on a climb?

This is a discussion of several hill climbing games, as I see them, and some of the parameters I use when playing them. My hope is that you’ll contribute to the discussion so we can all learn from one another!

This game is the one we all know and love: define a hill, ride up it as fast you can, log your time and try to get the to the top of the leaderboard. Easy. Or is it?

With Strava, there’s nothing stopping you from hitting the start line at full-tilt. This tactic can obviously boost your performance versus a rolling start or standing start. Clearly, big hills are less influenced by starting speed, but on my local short and steep training hill  — Hodgson Street, Kew — the difference between a rolling and flying start is substantial.

To me, a perfect hill for Game 1 would have all of the following attributes:

So what is the perfect hill in Melbourne for this game? I like the Devil’s Elbows, the version that starts at the T-junction and ends at the Churchill Road crest.

If the biggest hill you have conquered is the 1 in 20, the next move is to ride something with a greater elevation gain — Montrose to Skyhigh (415m) or the south side of Mt. Macedon (448m), for example.

Mt. Hotham (1,415m) is Australia’s biggest sealed climb as far as I know (and I’m happy to be corrected). To my knowledge this game ‘ends’ when you ride up Mauna Kea on Hawaii’s Big Island which climbs from sea level to 4,000m, with the upper half averaging 10% on dirt. Hooley dooley!

Warning: reading this section might affect your enjoyment of cycling.

Game 1 is great for the Trevor and Jason Spencers of this world — the super-light, powerful riders that can stomp up climbs at great speed. But what about the rest of us who have little real chance of getting onto the Strava podium for a popular hill? What’s a realistic challenge we can set ourselves?

This is where Game 3 comes in.

In essence this game involves improving your VAM — the speed at which you accumulate vertical metres, measured in metres per hour. This is done for a comprehensive range of hills from small to very big.

It is logical that a cyclist’s maximum VAM will be higher on a short climb than a long climb — that is, it’s hard to maintain a super-hard effort for an hour but 10 minutes might be manageable. It is also logical that better VAM results will be achieved when a climb has no flat sections or, god forbid, sections of downhill. I refer to these features as ‘dead wood’.

Recording your VAM results on many hills — i.e. with different values for elevation gain — allows you appreciate the type of climb that suits you best. Such a catalogue (mine is an Excel spreadsheet) allows you to create a VAM ‘envelope’ of your performance.

The catalogue allows you predict your potential time on an unknown climb based on its elevation gain and average gradient. From my own catalogue I know that steeper hills tend to facilitate better VAM results, for me. This conclusion is evident from the fact that all the VAM results that form my envelope are on steep (10%, say) or very steep hills (12-16%).

This may be due to relatively less energy being wasted overcoming wind resistance when climbing slower, or perhaps it’s just that lazy cyclists are forced to work harder when the going is really tough. For me the sweet spot is around 12% (or even steeper) on short hills.

For example the first pinch of Terry’s Avenue in Belgrave (which climbs 100m in 600m of riding) averages 16.7%. My VAM there is higher than on Hodgson Street which is about half the height and half the gradient (45m, 8.2%).

The 1 in 20, with its modest average gradient, is useless for VAM because for the same elevation gain, Alton d’Huez (near Mt. Macedon) with its ~10% average gradient allows for much better VAM.

So, to me, the perfect hill for Game 3 would:

The VAM game can be somewhat solitary and results are hard to come by. A ‘result’ is when you expand your envelope. So for me, a PB on the 1 in 20 is a null result in this game. The merits of the game include exploring for hills that facilitate superior VAM, thereby giving me a leg-up for Games 1 and 2.

This quest for VAM on bigger hills led me initially to France, then to Colorado and later to Italy in search of better hills. I’m convinced it has made me a better cyclist.

So, what is the perfect hill for maximising VAM?

One final comment on VAM: if you are doing it right it is desperately hard work, which is why it is so good for you.

This game is really simple: accumulate lots of vertical metres in one ride. Bigger is better. It is ideal for cyclists training for big endurance events, or to ride a distant hill that is much bigger than their local biggest hill.

So if you aspire to ride Mt. Hotham, you need to be good for five laps of the 1 in 20. Actually, I reckon Hotham is harder that that.

Or if you want to ride the course of La Marmotte, a gran fondo in the French Alps that includes Col de Glandon, Col du Galibier and Alpe d’Huez for a total elevation gain of about 5,000m, you would be well-advised to do a 5,000m ride at home first.

So what’s the best hill for Game 4? The hill needs to steep enough for free-wheeling all the way down, but not so steep that tired legs baulk towards the end of a long session. For me, Mt. Donna Buang worked well in 1994 when I managed to complete 10 climbs of the mountain in one day [ed. If you click on one link in this piece, make it this one. Awe-inspiring read].

Bear in mind that really big climbing sessions are also a test of your ability to tolerate contact point pain, so there is an advantage in getting it over and done with as soon as you reasonably can.

The quest for maximal elevation gain is unusual and not for everyone. It could be argued that, to some extent, it is a surrogate for real performance. What I mean here is that, for folk who have no chance at all of matching the times of Jason & Trevor Spencer in Game 1 (I’m one of the many), they can go out there and, armed with buckets of determination, grind away all day and rack up a huge amount of vertical metres.

Game 5 is a combination of several, or all, of Games 1 to 4. It is limited only by your imagination and physiology because it allows you, the cyclist, to create your own virtual ‘hill’. It is best described by way of a couple of examples.

Let’s suppose you want to improve your VAM for a hill with 450m of elevation gain, but the only one close to home is marred by modest gradients and deadwood. Well, using Game 5, you can solve this problem by creating a vastly improved ‘virtual’ 450m hill by doing 10 laps of Hodgson Street (45m, 8.2%). A GPS and Strava allow you to add the 10 individual times for the relevant segment.

No, it’s not the same as the real deal, and yes your VAM on the virtual hill will be quicker — you get a chance to rest between repeats — but this is a game, right?

Perhaps you aspire to ride Monte Zoncolan in Italy (1200m, at 12%) but cannot fly over there for the weekend. Game 5 helps you to do the next best thing by ‘climbing’ Zoncolan in Belgrave — 6 laps of Mast Gully Road [ed. Sweet jesus.]

Based on my experience, the total time for the 6 laps is quicker than the real deal — no surprise there. Game 5 differs from Game 4 (total elevation gain) because you record the elevation gain, total time and gradient.

The virtual hill created by 6 laps of Mast Gully Road (1,230m, 15.7%), if it existed in the real world, would rank high on the list of Europe’s hardest climbs. And 10 laps would be even harder. But wait, there’s more …

I think it’s fair to say that the chance of any weekend warrior matching that mighty number is somewhere between Buckley’s and none at all. But Game 5 can at least let you dream of succeeding, and this is how you might do it.

Back in the real world, if you are doing it right, Game 5 is sensational training, as others have found. Take English runner Roger Bannister for example. He divided the mile into 4 laps and ran each separate lap, with a small break in between, in a combined time that was faster than 4 minutes. Then he aimed to put it all together in under 4 minutes – and succeeded!

So those are some of the games we cyclists can play, if we’re not interested in racing but still looking for a challenge. Of course, it’s important to remember that cycling is supposed to be fun … even if ‘normal’ folk mightn’t see riding up steep hills as fun.

So, which is your favourite game to play? Are there climbing games I’ve missed here? And what is your perfect hill?

25 Replies to “Guest post: In search of the perfect hill (and other games)”