A few weeks ago Angus Boase made us all jealous with his great story about climbing the legendary Alpe d’Huez. Now he’s back with another guest post about climbing some more of France’s most iconic mountains, including Mont Ventoux — one of the most recognisable climbs in world cycling.

I combined these classics with climbs that are new to the Tour de France, including the Col du Grand Colombier and the Mur de Péguère. Some were covered with crowds waiting for the Tour de France to come through, others were shrouded in fog and drizzle and more or less abandoned. Each one was special in its own way.

But there was one mountain that made me choose the tour I ended up going on. A climb that’s always captured my imagination: Mont Ventoux.

There are so many stories about this great mountain. From Napoleon cutting down all the trees for his ships in the 19th century, to the tragic death of British cyclist Tom Simpson while climbing the mountain in 1967, to Lance Armstrong’s ‘gift’ to Marco Pantani in the 2000 Tour de France.

My meeting with Ventoux began the day before the climb. We were riding from Montelimar through the Drome Provencale region to the village of Grigan. Our guide stopped us and asked what we could see: ‘Anything special?’ He then pointed to Ventoux. It stood all alone in the distance, with its bald top and tower clearly visible. For the rest of the day I could not stop looking at the great mountain. 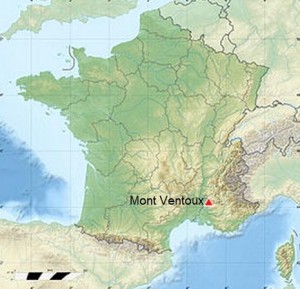 That night, while we dined in a 400-year-old farm house, the same guide told us a story. In his strong Yorkshire accent he explained how it was Ventoux that got him into cycling. When he was 13 he told his dad he would ride that mountain — when he finally did it was the best day of his riding life.

He was so passionate about it and we were all moved. Then came the story of Tom Simpson — a story that brought Dave, who told the story, to tears before he finished.

And so the scene was set.

Setting off from Malaucene — one of three approaches to Mont Ventoux — we had a 15km ride to the base of the mountain. Mont Ventoux sneaks up on you, unlike other mountains in the Alps.

The gradient slowly increases — 1%, 3% — you’ll be at 5% before you’ll even realise the climb has begun. The 7km mark is where it really kicks up, the gradient increasing to above 9%. And that’s where it stays for the next 11km, at around 9%, with a kick of 11% thrown in for fun.

It was just a constant grind, kilometre after kilometre. I was so busy looking around that I didn’t really notice how hard it was. But looking at my speed and heart rate soon changed that.

Traffic was sparse, although there was always a cyclist in front to aim for. The tower at the top would occasionally appear through the trees as we rounded a corner. I enjoyed riding through the trees on my own — it was so quiet and peaceful. Every corner looked as if it would bring some relief. But there never was. The road wound its way up through rock cuttings and passed caves, closer and closer to that famous moonscape.

And then, just like that, the trees were behind me. The views opened up and I could see for ever it seemed. That famous moonscape was caused by harvesting all the trees and by the winds that blow all year round, removing the top soil. Now nothing grows atop Mont Ventoux … and I mean nothing.

At the 14km mark you round a corner and in front of you stands Chalet Reynard. It’s set well back against the mountain with a huge car park in front. On race day this whole area would be packed with thousands of people.

As I turned the corner in front of the Chalet, the tower came into full view. It seemed as if I could touch the top of the mountain. But there was still 6km to go. I knew that the gradient would soon ease and the relief came about a kilometre later, the slope easing back to 7% then to 5%.

With the riding getting easier I took more time to look around. The road disappeared before me then came into view way over to the left, just below the tower. Not far to go.

Tom Simpson’s memorial was the next marker, covered with all sorts of cycling gear: water bottles, gloves, hats — whatever people had with them at the time I guess. No stopping for me though — I would come back down to visit La Grave once I had reached the top.

After passing the memorial there was a slight bend to the left which opened up the view to the last slope. It was cruel. I rounded the hairpin and the road kicked up to over 10% again. A cyclist in front of me was zig-zagging all over the road — not the shortest way up I am sure. I yelled so he knew I was passing. ‘Not far to go now!’, I kept telling myself.

The tower was out of view right above me, hidden by the steep slope of the mountain. Rounding the last hairpin at over 10% brings you into an amazing area filled with people, cyclists, cars and motorbikes.

I was at the top. I slowly rode through — I needed some space to myself. Never before had I felt this emotional after a climb. Even thinking about that moment now gives me goose bumps.

I wandered around in awe. I am not sure how long I gazed around before heading back down to the memorial. It was a fast ride down and it felt like I was going to fly right off the mountain into space. I let out one huge scream, the culmination of the effort I’d put in to get to the top. Who knows what people thought and who cares? As I read Tom’s stone I realised it was the 45th anniversary of his passing. Perhaps that’s why I felt how I did?

The group left before I was ready to go down. I did not realise it at the time, but that was a blessing. The guide made sure their pace did not get too high. I had no such restrictions on the 20 thrilling kilometres down the mountain — what a shame! The road surface was great and it was easy to see ahead, so I put the brakes away. My arms where tired by the time I rolled into town, as were my cheeks from grinning so much.

While Mont Ventoux was the highlight of the trip, it certainly wasn’t the only amazing mountain I climbed.

The hardest climb was up the Col de la Madeleine. The climb is 19km with an average gradient of 8% and it was a nice 90km ride to the start of the climb. The temperature at the bottom was 38°C and while I expected it to drop on the way up, it never fell below 30°C. I suffered in the heat and needed to sit under one of the many water fountains beside the road to recover.

On two occasions I rode the race route on the day of Le Tour. The first time it was Col du Grand Colombier and Col de Richemond on the same day. Stopping at the base of the Colombier and looking up I wondered who would even bother to build a road up there.

The crowd was fantastic, the roadside crammed with people for the entire 20km to the top. I really felt special as everyone yelled and clapped me on. It’s not a particularly hard climb — there are some almost flat bits as well as some of 10% or more. The views are great, and the road twists and turns all over the place. Of course, all of this makes for great television from the helicopter shots.

The Mur de Péguère was the next climb I tackled on race day. The first 6km are fairly easy, with gradients between 2% and 6%. But then the road turns left, narrows, and goes straight up. The road sign said 18% and while I’m not sure my Garmin agreed, I did often see 15-16% over the next 4km.

The road up the Mur de Péguère was about 2-3 metres wide and the crowd was just nuts. Drinking, music, amazing costumes — it does not get any better. I needed to yell often to get people out of the way — there was no way I was going to step out of the pedals. At times my speed was less than 5km/h, due to the steepness of the climb and the crowd swarming the road. At the top somebody was cooking a pig on a spit. So cruel — it smelled so good.

And then came the infamous ‘Circle of Death’ — a brutal route that covers four large climbs (Col d’Aspin, Col d’Aubisque, Col du Peyragudes and the Col du Tourmalet) and climbs nearly 7,000m.  Unlike the Tour de France riders that completed the circle in one day (stage 16 this year), I did it over three days. But I also did three extra mountains:

In my 15 day trip I rode over 1,300km and climbed in excess of 21,000m. While I did get to see the Tour de France a number of times in those 15 days, the trip was really about riding the famous climbs of the Tour. And in that, it was a huge success.

2 Replies to “Guest post: Climbing Mont Ventoux (and much more)”