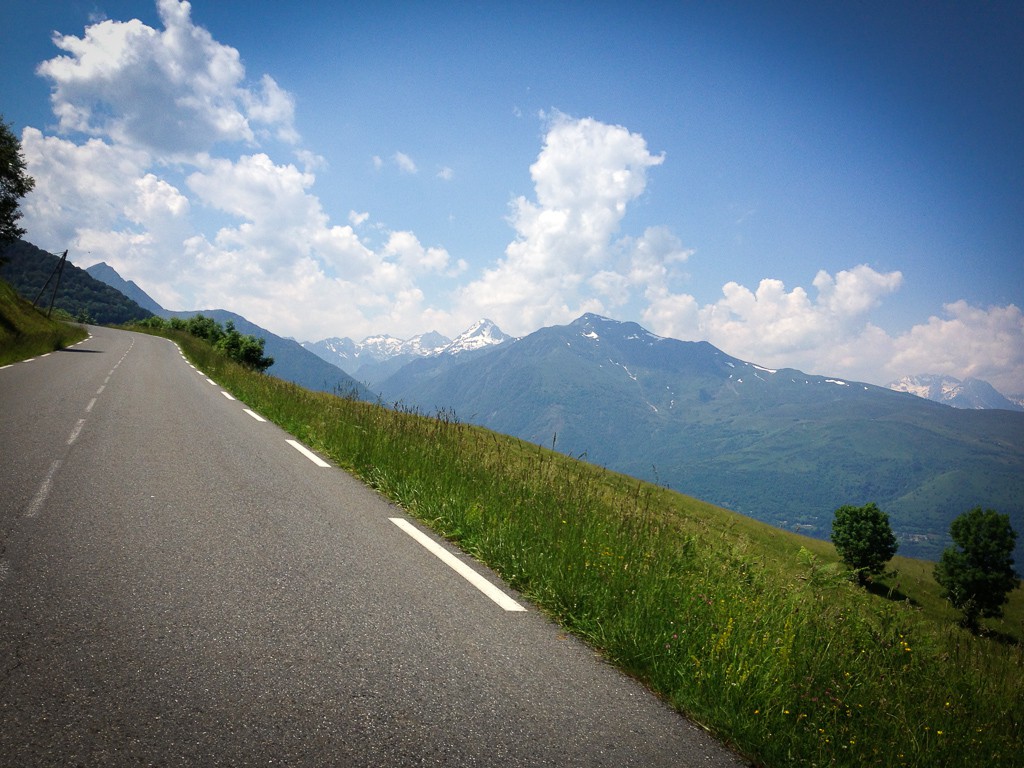 The second rest day in this year’s Tour de France has drawn to a close and, to be honest, it wasn’t very restful. Rather than sitting around doing nothing I figured I might as well go and climb Mont Ventoux, given it’s only 40km or so from where Wade and I are staying in Nyons.

But before I get to that I thought I’d give a quick run-down of the rides I’ve done in the week since my last post. I only realised today when I was looking at Strava that I did nearly 400km of riding in the past week, which would go some way to explaining why I feel so tired.

After two days following the Tour de Frace by car, Wade and I met up with our Bikestyle Tours group in Toulouse and headed out for a quick afternoon spin around the nearby airport. It was far from a long and challenging ride — 34km at a very leisurely pace — but it was great to get out for a quick spin and loosen the legs up after several days of driving.

Click here to see the Strava file from the ride.

Our second day with Bikestyle Tours featured a ride that was far more challenging. We headed into the Pyrenees and did a ride that took in the Hourquette d’Ancizan climb, the final climb on stage 8 of the Tour de France where Dan Martin attacked.

The climb is 10.5km long at 7.5% which didn’t tickle, particularly given I was pushing quite hard. But with so many people on the roadside cheering, clapping and yelling encouragement there was plenty to take away from the discomfort. 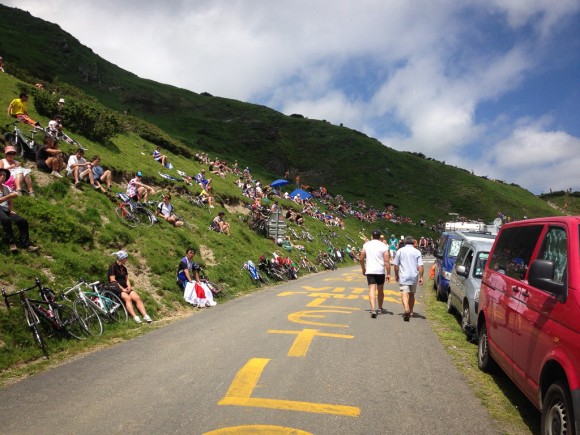 After enjoying an incredible descent down the other side Wade and I climbed a 5km stretch of the famous Col d’Aspin. Wade was pushing me to hold onto his wheel which was no easy feat. I got to the top feeling exhausted, but the descent on the other side instantly distracted me (check out the gallery below to see what I mean).

Sitting in a Bikestyle Tours tent at the bottom of the climb and watching the race on TV was a great buzz, particularly given the race route was just behind us and we were watching the riders climb a mountain we’d just climbed.

On the way to our hotel in Lourdes we got stuck in a Tour de France post-stage traffic jam that saw us move 10km in probably 2 hours. It was a frustrating drive but I’m starting to learn that that’s all part of the Tour de France experience.

On our first day down in Lourdes the Bikestyle Tours gang drove us by bus to Bagneres-de-Bigolle and from there we rode the 10km or so gradually uphill to the base of the Col du Tourmalet.

Having seen the great battle between Andy Schleck and Alberto Contador on the Tourmalet in the 2010 Tour de France I knew a little bit about the climb, including the fact that it was steep. All up it’s about 17km at around 7% — not to be sneezed at.

My plan was to take it nice and gently up the climb, to soak it all in and enjoy the moment. The heat made it hard to find a rhythm but eventually I did and the kilometres passed gradually by.

It’s a truly stunning bit of road, and even though it was above 30ºC when we rode through, there was still snow at the summit and on the nearby hills.

The final 4km beyond the ski town of La Mongie are pretty tough — around 10% average — but they passed by quickly thanks to the company of a fellow Bikestyle Tours rider Ben … and the fact that the scenery was so breathtaking.

I got to the top, took a few photos and then, when I was about to roll back down, I realised that one of the brake pads on my back wheel was rubbing on the rim. No wonder it had felt hard! I don’t know when that had happened (it wasn’t like that at the start) but it certainly wouldn’t have helped to make the climb easier!

Slow and steady up the Hautacam

Wade had been battling illness since Corsica and I was feeling a little bit ordinary on this particular morning. But after a bit of a sleep in we headed out to the small town of Argeles-Gazost to climb another nearby monster of a hill: the Hautacam.

Like many of the hills in the Pyrenees the Hautacam is steep: 14km at nearly 8%. And unlike the Tourmalet which is largely consistent, the gradient on the Hautacam fluctuates wildly. There are some flat sections then some kilometre-long ramps of 10%+ that really sap the legs of energy. 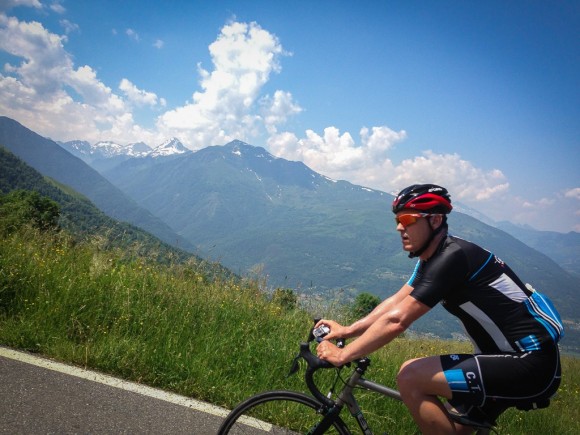 Given we were both feeling a little under the weather Wade and I took it very easy up the climb, but even then it was far from easy. The steep ramps were painful and the high average gradient made the climb a great challenge. We certainly weren’t flying up the mountain like Armstrong did in 2000, that’s for sure.

The Hautacam isn’t as high as the Tourmalet (1,400m vs 2,100m) so there was no snow around, but everything was so lush and green that it was still incredibly scenic (more photos below).

After spending time in the Pyrenees following the Tour de France and getting some rides in, our tour group started its journey north east towards the Alps. Our first stop was the lovely little town of Cahors where we got two rides in.

On the first day our group followed the Lot River up and around the local countryside, including to the truly incredible town of Saint Cirq Lapopie.

We enjoyed it so much that Wade and I headed back the next day and did the exact same ride, and it was great. The town is a real hidden gem that we never expected to see and they were two rides I’m really glad we did.

Click here and here to see the Strava files from my rides.

After a couple days spent in transition and without riding, Wade, myself and the tour group got to Nyons, just north of the mythic mountain that is Mont Ventoux.

On the morning of stage 15 of the Tour de France (which finished atop Mont Ventoux) the tour group got a lift by bus out to the town of Bedoin at the base of the mountain. From there it was up the gruelling 21km climb to the summit to find a spot to watch the race.

If you know anything about Mont Ventoux you’ll know that it’s a bloody hard climb. As mentioned it’s 21km to the top, and the average gradient is somewhere around 8%. Not only that, the first 6km average something like 3% leaving you with 15km at a touch under 9%. Yep, it’s huge.

As if that wasn’t hard enough we rode it with backpacks on, to cart food, clothes and more to the top. The last time I climbed a huge mountain with a backpack on it didn’t go so well. But this time around it didn’t seem that hard … probably because we were taking it reasonably easy, and probably because there were so many fans around the place, providing a welcome distraction.

We got to within 800m of the summit before the gendarmes turned us around and after a bit of a rest we headed down to Chalet Reynard, 6km from the summit, to watch the race. There was a great buzz down there, until the big screen went out with 10km to go. The next thing we knew Nairo Quintana and Chris Froome were flying past us at some unfathomable speed. Truly incredible.

As mentioned at the top of this post, today was the second rest day in the 2013 Tour de France and we decided to give Mont Ventoux another crack. With significantly fewer people on the climb and no backpack to lug up the mountain, I was keen to see if I could have a nudge at a decent time.

I knew I couldn’t afford to blow myself up in the easy 6km at the start of the climb given how hard the rest is. So I took it easy and when the steep stuff came around I just tried to find a rhythm.

My goal was to finish the whole climb in under 2 hours, meaning I’d have to average 11km/h or so. I knew I had some time in the bank from the early flat section, but when I couldn’t hold more than 10km/h on the steep section through the forest I thought my plan was out the window.

But then it flattened off slightly at Chalet Reynard and I was able to up the pace and push for the line. In the end it took me around 1:43 to finish the climb, which I was very happy with.

For a bit of context, I decided to time the last 15km of the climb and see how I compared to Chris Froome the previous day. It took me around 1 hour 20 minutes to cover that 15km — Chris Froome did it in 48 minutes 35 seconds, the second fastest time in history. I know comparing myself to Chris Froome is more than a little bit stupid, but how on earth you could average 20km/h+ on that climb I just don’t know. Incredible stuff and amazing to watch.

And that brings us up to date. It’s been another very busy week here in France, combining riding with work, but I’m having a blast. There are only 6 stages of Le Tour left and after that it’s back to cold and wet Melbourne. Before then I’m very much hoping I can sneak in a climb of Alpe d’Huez.

Until next time thanks for reading and enjoy the rest of the Tour de France!

17 Replies to “Climbing the Tourmalet, Hautacam, Mont Ventoux and more”