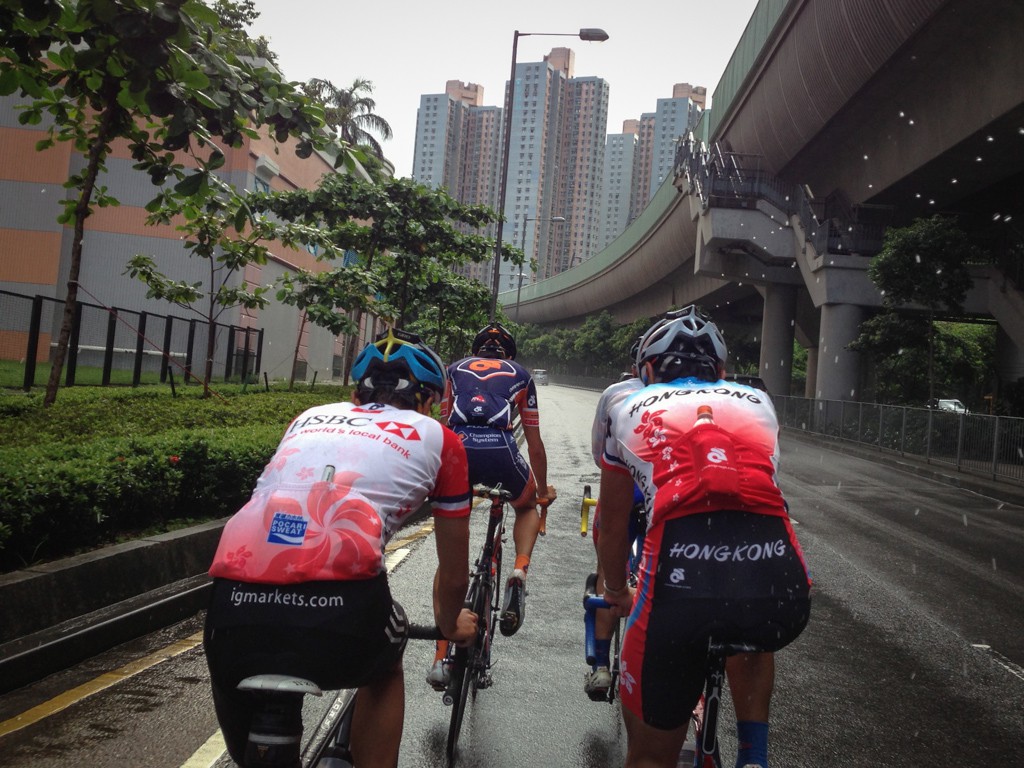 We stood on the pier, them talking Cantonese, me trying to catch my breath. I focused on their conversation, listening desperately for a word or two I might understand, but none came. Largely because my Cantonese knowledge extends as far as “hello” and “thank you”.

From their body language it appeared they were teasing one other — “it’s your fault we got lost!” I imagined one saying to the other — before one of them offered a simple hand gesture in the direction of the hill we’d just descended. It looked like we’d be heading back up the hill.

“We meet them back at the gate”, came the explanation in English. I clipped back in, relieved to now know what was going on, nervous about the impending climb.

An hour or two earlier I’d set off from Hong Kong’s Sha Tin district, riding with a bunch of local riders, including a couple of pros. I was in Hong Kong for CyclingTips, on a brief stopover before heading over to Europe for the Tour de France. The folks at custom clothing manufacturer Champion System had organised a group ride for us and the local riders had been intstructed to “put us in the box”.

Things started off easily enough. A gentle roll down a riverside bike track, dodging pedestrians, other cyclists and road furniture as we went. And then we jumped onto the road and things started to heat up. The local riders turned up the heat at the front of the group and I focused on just holding on. I really didn’t want to get dropped. I had absolutely no idea where we were let alone how to get back to the hotel.

The first uphill drag lasted somewhere in the vicinity of 7km. It was never steep, and there was some respite to be had throughout, but it wasn’t long before I was at my limit just holding the wheel. I’d started the ride with the luxury of being able to look around and take in the scenery, but as the pace continued my focus became the wheel directly in front of me.

I got over the top of that first rise in contact with the bunch but I’d worked hard to do so. And the descent wasn’t any easier — the pace was still on and I was dreading the next climb (which, given the terrain couldn’t have been far away). Sure enough, after 7km we started another climb that was clearly more than a short rise in the road and it wasn’t long before I became detached from the group and parachuted my way out the back.

Let me get the excuses out of the way first: it was hot and humid, my lungs felt like they were filled with gunk, and I hadn’t tuned my derailleur properly when setting my bike up post-flight. But basically I just wasn’t strong enough. Wade was up the front, chatting away with the pros, making it look easy, as always. If I was a betting man I’d say it’s not the last time Wade will leave me in his tracks on this trip (and not because he doesn’t wait for me — he does — but because there’s only so much you can wait).

A couple of local riders had stayed with me on the climb (thanks guys!) and after descending for a few kilometres we found ourselves at the aforementioned Wong Shek Pier … with only three of the 15 riders that had started.

We’d later learn that the front group had taken a different turn and that we’d missed it with them being further up the road. But it didn’t matter. After drinking in the gorgeous views at Wong Shek Pier, we clipped in and climbed back up the descent we’d just enjoyed. And despite my trepidation and fear that I’d be dropped again — only to have to find my way out solo — the climb back up was far more civilised. I was able to stay with the bunch and together we rolled back to the gate where the rest of the group soon joined us.

It was a short ride — a touch over 30km in the end — but it gave me a sense of what cycling in Hong Kong is like. Hilly, hot and humid. But I’m certainly not complaining. And even when I was struggling and getting dropped, I was still enjoying myself on some level.

After all, how often do you get to go on a work trip and ride in countries you’ve never been? I feel extremely fortunate to have this opportunity and I look forward to many more rides in the weeks to come.

Speaking of which, Wade and I are currently in Varese, just out of Milan, and we’ve been for one great ride already with another ride on the cards for tomorrow. Stay posted for more soon.

If you’d like to read more about our stay in Hong Kong, check out this piece Wade and I wrote for CyclingTips. Don’t forget you can come and say hi over on Facebook and Twitter too and you can click here to view my Strava file from the ride.

In the meantime, check out some of the photos I took from the ride and from our time in Hong Kong and China more generally.

4 Replies to “Cycling in Hong Kong: hilly, hot and humid”