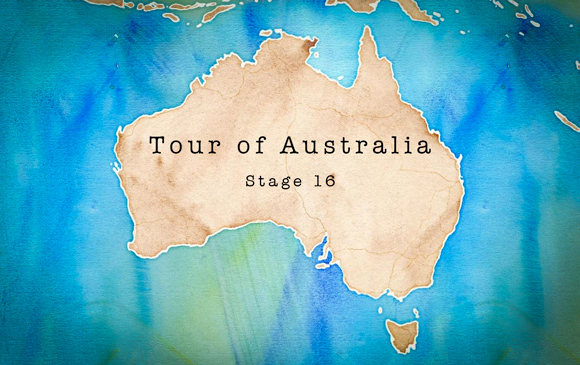 The 100th edition of the Tour de France is just around the corner, which got David Blom and I thinking: what would an Australian Grand Tour look like?

We’ve put together a course for a three-week race that takes in some of the best roads in the country in an attempt to create cycling’s fourth Grand Tour: the Tour of Australia. We’re currently revealing one stage per day in the lead-up to Le Tour. This is stage 16.

The early kilometres of the stage are home to a series of short rises, none of which are long or steep enough to rank as a categorised climb. In fact there’s only one categorised climb on the entire stage and that comes roughly 110km from the stage start. Before they get there though, the riders have an intermediate sprint point to contest in Braidwood after 87km.

At the 107km mark the riders reach the start of the aforementioned climb: a 4th-category rise that’s 2.3km long at 4%. It’s not a particularly challenging climb and once the riders reach the summit they’ve got a very technical 12km descent to negotiate. There are a number of corners on the steep descent of Clyde Mountain that come up very quickly and all the riders will want to ensure that they take it easy.

The day’s second and final intermediate sprint point comes in the river-side village of Nelligen before the riders push through to the outskirts of the fishing town of Batemans Bay. At this point, with 145km covered, the riders turn left onto the national highway (the Princes Highway at this point) and head north east towards the stage finish in Ulladulla.

It’s roughly 50km from that left turn to the finish in Ulladulla and apart from the occasionally rolling rise, this final section of the stage is largely flat. The stage ends near the centre of Ulladulla, right next to the harbour.

All things considered this stage should probably finish in a sprint finish. The only categorised climb of the day is only short and too far from the finish to prove decisive. And with 50km of largely flat road in the run-in to the finish, it gives the sprinters’ teams plenty of time to get organised and to round up any riders that might have chanced their arm in a breakaway.

Stage posted for stage 17 of the Tour of Australia, coming tomorrow.