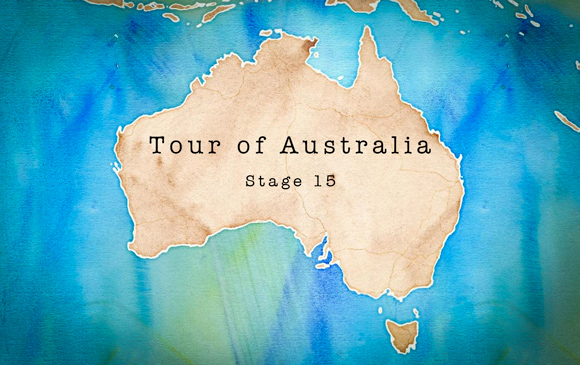 We’ve put together a course for a three-week race that takes in some of the best roads in the country in an attempt to create cycling’s fourth Grand Tour: the Tour of Australia. We’re currently revealing one stage per day in the lead-up to Le Tour and this is stage 15.

With the second and final rest day behind them, the riders have only six stages remaining before the Tour of Australia comes to a close. On stage 15 the riders start in the southern NSW town of Bega — just near the stage 14 finish in Tathra — and head north west into the ACT before ending the stage in Canberra.

The opening kilometres are more or less flat in the lead-up to the first intermediate sprint point of the day in Bemboka after 35km. A further 7km up the road the riders come across the first and only categorised climb of the day: the 1st-category ascent of Brown Mountain. All up it’s 10km of climbing at a touch under 8% with many sections that are considerably steeper than that.

It’s roughly 45km and generally downhill from the top of the climb to the town of Cooma at which point the riders head due north on the long run in to Canberra. There are a number of short rises and descents on this section of the Monaro Highway but no climbs significant enough to count as a categorised climb.

After 188km of racing, just past the small town of Williamsdale, the riders cross the border into the ACT. From here the riders continue along the Monaro Highway, approaching Canberra from the south and pushing through more short but relatively easy rollers.

After crossing the Molongo River — an extension of Lake Burley Griffin — after 222km of racing there’s only 7km left in the stage and the pace will certainly be on. The riders head north west along Morshead Drive alongside Kings Park and Lake Burley Griffin before taking a left turn onto Commowealth Avenue after 228km.

From here to the finish line it’s a dead straight, dead flat drag over Lake Burley Griffin and down the road towards Parliament House. The stage finishes roughly 100m before the State Circle which loops around Parliament House.

It’s hard to see this stage ending with anything other than a bunch sprint. You might expect to see the fast men fall away on the climb of Brown Mountain but with 160km from the summit to the stage finish, there’s more than enough time for the sprinters’ teams to take a breather before reeling in any breakaway that might have escaped (and one will have) and setting things up for a sprint finish in the nation’s capital.

Stay posted for stage 16 of the Tour of Australia, coming tomorrow.

One Reply to “Tour of Australia: stage 15”