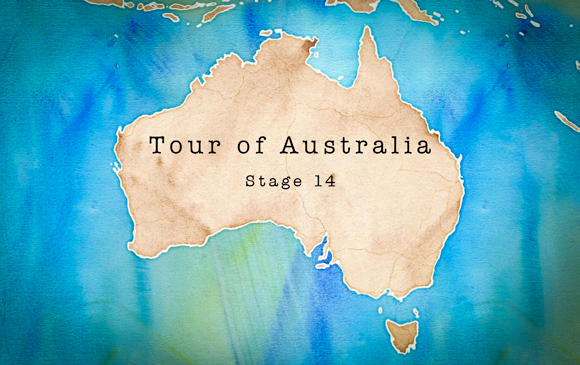 We’ve put together a course for a three-week race that takes in some of the best roads in the country in an attempt to create cycling’s fourth Grand Tour: the Tour of Australia. We’re currently revealing one stage per day in the lead-up to Le Tour and this is stage 14.

There’s a very challenging bike ride in NSW called the Sea 2 Summit in which cyclists ride from the Tasman Sea in Merimbula all the way to Charlotte’s Pass — the highest sealed section of the road to Australia’s highest peak, Mt. Koscuisko. On stage 14 of the Tour of Australia the riders do almost the opposite, riding down from Perisher (just down the road from Charlottes Pass) all the way to Tathra, which is just north of Merimbula on the coast.

As you might expect, it’s a largely downhill stage, with several long descents to enjoy. But there’s also a bit of climbing.

There aren’t any categorised climbs for the riders to worry about, but by the time the stage ends they will have clocked up nearly 2,000m of climbing just from gentle rises and uphill drags along the way.

After retracing their steps from the previous day, the riders find themselves in Jindabyne after roughly 30km of riding, most of it downhill. It’s another 30km down the road to the first intermediate sprint point of the day in Berridale at which point the route swings north east towards Cooma.

There’s a brief descent heading into Cooma but after passing through town the riders head south east on the Monaro Highway which, over the next 50km, rises some 350m. After 146km of racing the road heads down a steep and technical descent which lasts for most of 20km. When the road flattens out it’s only 7km to the second and final intermediate sprint point of the day in Bemboka, 170km into the 224km stage.

From Bemboka the road is largely flat and downhill as the riders approach the finish line in the seaside town of Tathra. There is, however, one small obstacle to overcome in the run in to the line.

Just before Tathra there’s a climb roughly 2km long which, while not being particularly steep, could shake things up a little before a short, technical descent and flat run in to the finish. It’s the sort of finish that probably suits the likes of Peter Sagan to a tee. He’s strong enough to stay with the climbers on a short rise like this, and when it comes time to open up and dash for the line, he should have most people covered.

It’s hard to see a breakaway getting a winning lead on stage 14 and the GC contenders will likely be happy to take it easy after the previous day’s exertions in the Alps. Either way, all of the riders can breathe a bigger sigh of relief than usual when they cross the finish line as they’ve well and truly earned their second and final rest day of the Tour.

Stay posted for stage 15 of the Tour of Australia, coming soon.