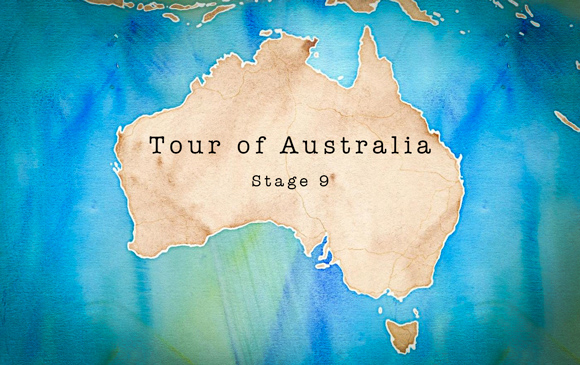 It’s roughly two weeks until the 100th edition of the Tour de France gets underway, which got David Blom and I thinking: what would an Australian Grand Tour look like?

We’ve put together a course for a three-week race that takes in some of the best roads in the country in an attempt to create cycling’s fourth Grand Tour: the Tour of Australia. We’re currently revealing one stage per day in the lead-up to Le Tour and this is stage 9. Enjoy!

Click here to see the route on Ride With GPS, including the KOM and intermediate sprint points.

After a well-earned rest day the riders will assemble in the rural centre of Traralgon before embarking on stage 9 of the Tour of Australia. With only 1,050m of climbing in 207km it’s certainly not a hilly stage, but that doesn’t mean there isn’t a climb or two to shake things up.

In fact, the day’s only notable rises come inside the first 30km with the 2nd category Red Hill Road climb starting after just 13km of racing, followed by a 4.5km, 3rd category climb 2km of descending later. Neither of the climbs are ridiculously steep, but coming so early in the stage, and with several pinches above 10%, they’re far from an easy re-introduction to the race post-rest day.

From the top of the second climb, just 30km into the stage, the riders make their way onto the stunning fern-lined Grand Ridge Road which they descend towards Yarram. From Yarram, roughly 60km into the stage it’s a touch less than 150km to the stage finish and almost all of it is flat.

After turning onto the South Gippsland Highway and heading north east the riders will come across the first intermediate sprint point in Woodside after 80km of racing. A further 54km up the road, in Sale, the riders will pass through the second and final intermediate sprint point of the day before heading north east on Bengworden Road towards the stage finish in Bairnsdale.

The stage finishes on the dead-straight, dead-flat main street of Bairnsdale in front of what would hopefully be a large and enthusiastic crowd.

While the early climbing on stage 9 is likely to put the sprinters in difficulty, this is a stage that would more than likely end in a bunch sprint. It’s hard to imagine the GC contenders shelling the field so early in the stage and trying to hold a lead in the remaining 150km+ as the sprinters teams get organised behind them.

It’s a stage that might suit an early breakaway. A handful of opportunistic riders might jump away from the bunch on the early climb and get through to Yarram with a useful lead. But it would take a sizeable group working together on the flatlands to ensure that their lead is maintained as the sprinters’ teams try to chase them down.

For spectators of the race, either watching at home or in person, there are many great vistas and places of interest to check out. Tarra-Bulga National Park features early in the stage and the stunning views of Wilsons Promontory, 90 Mile Beach, the Gippsland Lakes would surely get their moment in the spotlight courtesy of the TV helicopters.

Stay posted for stage 10 of the Tour of Australia, coming tomorrow.