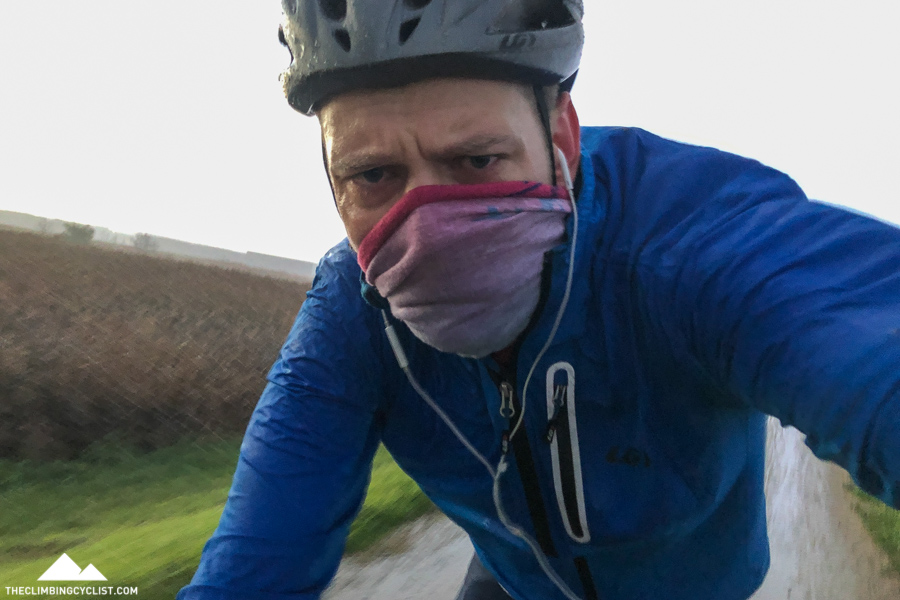 I pull to a stop, brake pads squealing on sand-covered rotors. It takes me several attempts to unclip my left foot; I can’t feel much below my knees. I don’t want to stop — I’d much rather push on and get this over with before conditions get even worse. But I need to check that I’m heading in the right direction, that I’m not prolonging this discomfort any longer than I need to.

Water drips steadily from the roadway above me, adding to the pool at my feet. It’s pouring out there — has been for hours — and I try to enjoy this brief moment of respite. With wet and cold hands it takes me a few tries to unlock my phone, to confirm that I’m still on track. I am. The river to my right opens out into the bay not far from here, and then I’m back on the road. Back on firmer ground. Back where I can move at more than 20km/h.

For the past hour or so I’ve been battling the elements on the southern reaches of the Dandenong Creek Trail. The sun disappeared some time ago, buried beneath the layers of bruised and swollen clouds that hover above. It’s getting dark, quickly, and I’m soaked through. I’ve still got nearly 20km to go.

I’d forgotten that the end of the trail was unsealed, sandy and soft. I’d failed to calculate that unsealed, sandy and soft + heavy rain would equal slow going. But by the time my tyres first sunk into that sodden surface, I was committed. I was already running late for the family gathering. There was no time to look for an alternative.

Every pedal stroke felt like a battle. Heavy wheels, heavy tyres — tyres decidedly not made for gravel — sunk with every revolution. If they didn’t sink they’d fishtail from side to side, sliding about with every injection of power. Thick, sandy slop was everywhere. On my bike, on me, on my mind. “I’m going to be so late.”

It wasn’t enough that I could barely get any purchase on the loose surface, that so little of the power I was producing was being used to drive me forward. There was also an interminable headwind blowing off the river, right into my face.

I found myself dreading the prospect of a puncture, hoping that any such misfortune could be saved for another day. I didn’t know if my swollen hands had the dexterity to pull a tyre off the rim. I sure as hell didn’t want to be standing out in the elements while I tried.

My mood oscillated wildly. In one moment I was able to laugh at the absurdity of the situation. To revel in the satisfaction of self-inflicted suffering. A moment later I was hating life, questioning my sanity, and wishing for this mistake of a ride to be over.

Up in the distance, I could see the occasional point of light cross the horizon from right to left, left to right. “That must be the road, Nepean Highway,” I figured. “That must be where I can finally turn off this sandy track and start to make some real progress.”

It took an eternity to reach those lights. Only when I got within 100m did I realise that it wasn’t Nepean Highway after all, but rather the Mornington Peninsula Freeway. I should have realised — those cars were moving much too fast.

I don’t stop long under the freeway. Just long enough to check directions and to send a message to those who are waiting. “I’ll be there a little after 6,” I type, my fat, frozen fingers dragging clumsily across my phone’s touchscreen. I can feel the cold starting to set in.

I know that I can get warm again if I just keep moving. If I wait here too long, the cold will be able to catch me, like some silent, invisible beast that’s been stalking me down the Eastlink Trail for the past few hours.

I check my pockets before I set off, making sure I’ve still got everything I set out with. Somewhere in the past few kilometres I’ve dropped my headphones adaptor but I can’t stomach the idea of turning around to look for it. Gotta keep moving.

The wind and the rain pummel my face the moment I push out from under the freeway. It takes me a couple of tries before I’m convinced my left foot is clipped back in. My feet are frozen.

My feet were already frozen an hour earlier, when I started walking through a flooded creek. I’d come around a corner on the Eastlink Trail only to see the path disappear beneath the heavy flow of the swollen waterway. I’d stumbled across a similar scene a little earlier, too, but on that occasion I’d found a way around. This time, I wasn’t so fortunate.

A quick look at Google Maps suggested that the only way over was to cross the nearby freeway. I wasn’t about to take that risk, nor was I about to waste time backtracking, trying to find another option.

I thought about trying to ride across but quickly dismissed that notion — the idea of a flooded bottom bracket wasn’t all that appealing. Instead, I shouldered the bike and waded through the knee-deep water, trying not to lose my footing in the surprisingly swift current.

Before long I was back on dry land, back on my bike, and back on the move. With every moment that passed, this ride was feeling more and more like an adventure.

The day had started out so well. Back at home there’d been no sign of the horrid weather that was lashing Melbourne’s outer east. There was no rain, no hail and no wind, just blue skies and flashes of a warming winter sun. It took about an hour for conditions to deteriorate.

As I followed the bike path along the Eastern Freeway and down to the Eastlink Trail, the weather turned. At Canterbury Rd I rode through five minutes of hail, the tiny balls of ice stinging my arms as they landed. And then the rain set in, for good.

I had to stop more often than I’d planned. A lack of familiarity with the southern end of the Eastlink Trail, plus a tight time schedule, meant I couldn’t just wing it. I wasn’t going to pick a direction and hope for the best. Time blew out.

Later, with darkness setting in and the freeway underpass behind me, I finally reach the end of the trail. I push through the boatyards of Patterson Lakes, past the multi-million-dollar riverside mansions, and up a winding path to the road. I check my lights. I’m not surprised to see that one of them has died. It’s probably something to do with the thick layer of gritty gunk that’s forced its way inside the housing. One rear light will have to do.

I’m pushing as hard as I can down Nepean Highway towards Frankston. Every 10 seconds I look down, through my legs, to make sure my other rear light hasn’t died. I can’t afford to be riding on a road like this without a rear light. I decide I’ll use one of my front lights at the back if the rear one conks out.

Breaks aside, I’ve been riding as hard as I can for the past hour and a bit. The numbers won’t look good on Strava, the conditions have seen to that, but I know I’ve given this just about everything I can. And yet I’m still way behind schedule.

On the outskirts of Frankston I manage to take a wrong turn. I’d thought the road looked familiar but I haven’t come into town from the usual direction. A quick check of my phone later and I’m back on course. Within minutes I’m arriving at my final destination: my brother Brendan’s house.

I’m nearly half an hour late and everyone else is here already, ready to go out and celebrate Brendan’s 30th birthday. As someone remarks, it’s unlike me to be late. They’d been getting worried.

I strip off outside, watching as the sand of the Dandenong Creek Trail slops off my leg warmers, my jacket, my jersey, my shoes. By the time I step inside, the cold has caught me. It’s tracked me through the streets of Frankston and has pounced on the doorstep.

A hot shower doesn’t warm me up. It takes the best part of an hour with several thick jackets on before the shivering stops.

There’s some talk at dinner about the motivation behind my ride. I’d set off from home knowing that the weather was likely to be terrible. Why do that to myself?

Simple: I was craving adventure. For as long as I can remember I’ve been attracted to the simple beauty of a one-way ride. The feeling of getting somewhere, of achieving something. To me, the addition of bad weather only serves to heighten that feeling. And I know I’m not alone.

For many of us cyclists, pleasure and suffering are inextricably linked. Pushing hard up a climb is both painful and enjoyable. Racing others is both excruciating and exhilarating. Riding three hours to your brother’s house in horrendous weather is both awful and amazing. In any of these situations, the satisfaction of completion is impossible to deny.

This wasn’t some multi-day epic over thousands of kilometres. It was a 70km jaunt through Melbourne’s eastern suburbs on a bike track beside a freeway. And yet it was the greatest adventure I’ve had on the bike in a long time.

One Reply to “Pleasure in suffering: A beautiful ride in awful conditions”