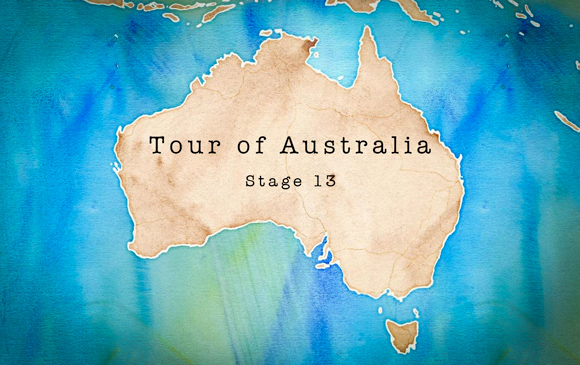 We’ve put together a course for a three-week race that takes in some of the best roads in the country in an attempt to create cycling’s fourth Grand Tour: the Tour of Australia. We’re currently revealing one stage per day in the lead-up to Le Tour and this is stage 11.

If this isn’t the hardest stage of the Tour of Australia then it’s very close. With four tough climbs — two of them hors categorie — and nearly 4,000m of climbing to contend with it’s a day that should be decisive in the battle for the general classification.

After finishing the previous day’s stage in the New South Wales border town of Albury the riders duck back over the Victorian border to begin stage 13 in Corryong. Heading east out of Corryong it’s only 14km before the Tour is back on the roads of New South Wales and only 28km before the stage’s first intermediate sprint point is contested in Khancoban.

The day’s first climb — a 1st category climb that rises at 4.7% for 14.6km — comes just a handful kilometres out of Khancoban, taking the riders south into the Koscuisko National Park. From the summit of that first stunning climb it’s most of 10km downhill before a few kilometres of rollers and the start of the day’s second climb at the 61km mark.

This second rise, a 3rd category, 5km-long rise at 6% tops out after 67km of racing before another flowing descent past Tom Groggin. At the 80km mark the road swings around to the left (east) and the riders face the first of two hors categorie climbs on the stage: the 17.8km rise at 6% to Dead Horse Gap. It’s another wonderfully scenic Alpine Way climb with a whole bunch of switchbacks, great views and native roadside flora to keep the viewers at home glued to their TV.

From the top of that climb, after 97km, the riders will enjoy a flowing 45km descent that’s very gradual and that takes them past the Thredbo ski resort after 100km and through an intermediate sprint point in Jindabyne after 135km. Heading north out of Jindabyne and past the lake bearing the same name, the riders re-enter the Koscuisko National Park and begin the final hors categorie climb to the end of the stage.

It’s 23.2km at 3.5% from the Thredbo River to the stage’s end at the Perisher ski resort and there are a couple of descents and steep sections to contend with along the way.

After the sprinter-friendly stage the day before this is a stage for the GC contenders, the climbers and the breakaway riders. You could imagine a handful of riders getting away early in the stage in search of the KOM points on offer on the first three climbs. But the long descent to Jindabyne would be the perfect opportunity for the bunch (or what’s left of it) to work together to reel in a break.

It could be very interesting to see a breakaway brought back into the fold in Jindabyne leaving the GC contenders to battle it out on the final climb ahead of the final week of racing. It’s a stage that’s perfect for TV audiences with a wealth of winding alpine roads, beautiful views and Australia’s highest mountain, Mt. Kosciusko, all featuring.

Stay posted for stage 14 of the Tour of Australia, coming tomorrow.