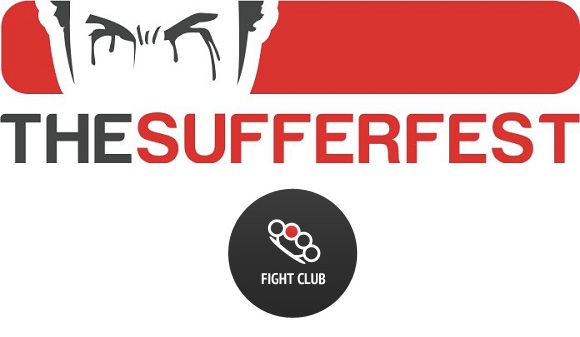 The first time I tried to do one of The Sufferfest’s training videos, my front derailleur snapped in half. I was forced to abandon the ride early but in truth I wasn’t all that disappointed. It was starting to hurt and I’d been given a good excuse to throw in the towel.

A few months on, with my training/commuting bike rebuilt, I figured it was time to go back and finish what I started. I logged on to Strava and loaded up ‘Fight Club’, one of three videos currently available as part of a Strava Premium membership. With the rain teeming down outside I set up my trainer in the lounge room, and streamed the video to my TV via iPad and Apple TV.

The hour-long video starts with a nice gentle warm-up along the familiar asphalt of Melbourne’s Main Yarra Trail. But it’s not long before you’re ditching the bike track and the workout begins for real.

The bulk of Fight Club comprises repeats of an individual time trial effort and a climbing effort. Each ITT lasts four minutes, in which time you’re supposed to ride at 7/10 of your maximum intensity (about threshold). Each climbing section lasts for 2:30, and these efforts are done slightly above threshold, with an intensity of 8/10.

Both the ITT and climbing sections use footage from the 2009 UCI Road Cycling World Championships. The ITT follows the likes of Gustav Larsson, Tony Martin and Fabian Cancellara as they duke it out for the world title. The climbing section features footage from the men’s road race at those world champs in Mendrisio, Switzerland, a race that Australia’s Cadel Evans would go on to win.

It was great to see that footage again and to be able to ride alongside Cadel as he made his winning move and buried himself en route to victory. But any enthusiasm at reliving Cadel’s win was tempered by the considerable discomfort I was in just trying to follow the video’s instructions.

These ITT and climbing efforts are hard enough on their own — and they feel harder as you go along — but throughout the four blocks there are also 28 ‘attacks’. These are essentially 10-second efforts in which you’re instructed to push as hard as you can, before returning to the effort you were previously at.

These attacks start off hard and only seem to get harder as you go along. I certainly dreaded them every time they came along. At one point in the last block of efforts I thought I saw the words “no attacking!” flash up on the screen — it seemed I’d be left to suffer in peace without throwing on an extra helping of pain. But when I wiped the sweat out of my eyes I realised it actually said “no slacking!” and the attacks came thick and fast.

The one good thing to be said about those attacks is that they make the ITT and climbing efforts feel comparatively gentle. I might have been feeling uncomfortable in the ITT section but immediately after an attack an intensity of 7/10 suddenly felt easy. For a moment anyway.

The four blocks of efforts are separated by an easy three-minute rest period, set to footage of a rider descending the Col du Glandon. There’s such a feeling of relief when each block of efforts is done and you can just spin your legs and admire the scenery. That said, about halfway through each rest period I’d start to get apprehensive about what lay ahead.

The workout ends with an amazing video for you to watch while you warm down but I won’t spoil it for you here.

David McQuillen and his ‘minions’ at The Sufferfest had done a great job in recent years to become one of the biggest players (if not the biggest) in the cycling training video space. I think a lot of that is down to the playfulness of the Sufferfest ecosystem.

You’re there to suffer — and you will be made to suffer — but the videos are imbued with a real sense of humour and charm that’s actually quite difficult to get right. I particularly like the whole mythology of Sufferlandria — a nation of hard nuts who will put themselves through hell just to get stronger on the bike — and Sufferlandria’s ongoing conflict with nearby Couchlandria — a nation of decidedly more sedentary folk. (The Sufferlandria Ministry of Tourism and Torture website is more than worth a look incidentally.)

Back to Fight Club, there are few little things about the video that jarred with me slightly. Such as the repeated use of some footage during the video, and some of the continuity quirks. In the earlier ITT sections you follow the likes of Brad Wiggins and you can see from the intermediate time checks that Cancellara has already done his ride. But then you go and ride alongside Cancellara after that.

But this is just being nit-picky in the end it really doesn’t matter — you’re there for a solid workout and Fight Club more than delivers.

Overall I found Fight Club to be very difficult … but that’s the point, right? It’s tempting to take it easy every so often (and unlike in a spin class, there’s no-one to stop you if you’re doing the video at home by yourself) but you won’t get maximum value out of the experience if you do.

I can safely say I gave it everything I had all the way through and I’m glad I did. Peeling myself off the bike with jelly for legs and more sweat on me than I would have thought possible, I felt extremely satisfied. It was hard, but I got through it and I’ll be stronger for the experience.

I was going to write “I’m looking forward to trying out more Sufferfest videos” but that’s not entirely true. I don’t think it’s possible to look forward to the sort of pain you go through to finish one of these things. But I will certainly be back to try more as they are a great way to train your top end, to prepare you for racing, and to help you learn more about yourself as a cyclist.

Have you done Fight Club before? How did you find it?

16 Replies to “Review: ‘Fight Club’ training video by The Sufferfest”