This is part one of a two-part story about a recent trip to the Snowy Mountains. Click here for part two.

We cyclists tend to be drawn to superlatives. The steepest climb; the longest ride; the hardest day on the bike. And as a cyclist that’s particularly fond of riding up hills, it’s only natural to be attracted to ‘the highest mountain’. We’ve seen this in the rise of the Everesting phenomenon but for me, the pursuit of ‘the highest mountain’ took a more local dimension.

The highest point on mainland Australia is Mt. Kosciuszko, a rock-strewn peak in southern New South Wales that stretches to some 2,228m above sea level. Compared to the peaks of Europe or the Americas, Mt. Kosciuszko is barely a hill. But it is the highest we have and for as long as I can remember I’ve wanted to visit.

Plans to visit Kosciuszko and the Snowy Mountains had been made and then sidelined several times in recent years but earlier this month they finally came to fruition. Over a great long weekend I’d get to experience this beautiful mountain range for the first time, starting with a long and challenging ride along the Alpine Way.

With tools like Google Maps, Google Street View and Strava it’s possible to ‘know’ a piece of road without ever going there. Such was the case for me with the Alpine Way from Khancoban to Jindabyne. I’d spent many an hour poring over Street View images from the road’s two main climbs and I’d written about them both in the fictional Tour of Australia route I’d published with David Blom in 2013.

But of course, there’s a great difference between seeing a road on your computer screen and actually being out there riding it.

Dad and I left Melbourne on the Saturday morning, making the five-hour drive up to Khancoban via the Hume Freeway and the Murray Valley Highway. Not far past the Victorian border, Khancoban was every bit the small town I was imagining. A couple of pubs and a few shops, broad-accented locals and a dirt-cheap caravan park with an owner that was far less concerned about us paying for our stay than we were.

A brief exploration of the nearby dam — a tiny part of the Snowy Hydro Scheme — was followed by dinner at the local pub and an early night.

You need only look at a map to see that Khancoban is a gateway to the Snowy Mountains and the Kosciuszko National Park. The first climb into the hills begins just three kilometres from town, making Khancoban the perfect launching pad for the ride I had planned.

I set off at 7.30am leaving Dad to enjoy some time in Khancoban before he followed me up the road. He’d leap-frog me throughout the day, stopping whenever he saw something he’d like to see more of, then continuing on until our paths crossed again.

I wouldn’t know until hours later just how hard the ride was going to be but I knew from the start I’d have to pace myself. I approached the first climb timidly and rode well within myself when I got there.

I think I was expecting a long, consistent climb but the reality only half matched my expectations. It was long — about 15km to the top — but the gradient was far from steady. It would take me a little while to get comfortable on a section of roughly 6% gradient, and then the road would flatten off or even descend. The road was forever changing, making it hard to get into a rhythm.

But I wasn’t too concerned; I was mainly focused on savouring the moment. Riding this road had been a long time coming and I wanted to make the most of it. In reality it wasn’t that hard to do — the weather was about as good as you’re likely to get anywhere in the world (23 degrees with bright sunshine), there were very few vehicles to share the road with, the views were great, and wallabies and other wildlife darted among the trees by the side of the road.

The top of the climb eventually came and after a brief visit to the Scammell Spur lookout I began the fast and thoroughly enjoyable descent down the other side. The thing I will remember most about that descent was the frequent, tunnel-like cuttings that I passed through, often at great speed. I couldn’t help but feel for the road builders who must have spent years carving and shaping this amazing piece of road; a road that I was now thoroughly enjoying.

From the end of that descent I was venturing into the unknown. I knew the second big climb of the day started in about 30km, but I had no idea what those 30km were like. Sitting here a few weeks later, the word ‘lumpy’ seems most apt.

Much like the road from Noojee to Tanjil Bren on approach to Mt. Baw Baw — one of my favourite rides — there barely seemed to be a metre of flat road between the day’s two main climbs. I’d climb for a little while then descend, and then the pattern would repeat itself, constantly sapping the legs.

After one particularly fast descent I met up with Dad at a speck on the map called Geehi. As far as I can tell there’s almost nothing there except a lovely little camp ground on the banks of the Geehi River, but that alone was enough to demand our attention. We stopped there for morning tea on the way home a few days later and decided that another visit was required at some point.

It took me nearly three hours to cover the roughly 55km from Khancoban to Tom Groggin where the day’s hardest climb began. The lumpy terrain was starting to take its toll on my legs and my final destination of Jindabyne didn’t feel like it was getting any closer. After saying “hi” to Dad briefly at Tom Groggin — where the road meets the Murray River and the Victoria-New South Wales border — I got to work climbing the 17km to Dead Horse Gap.

The first 1.5km or so of the climb are easy and I remember thinking “has the climb even started?”. But then I hit a sharp left-hander and any doubt in my mind was quickly erased.

There’s a 3.4km section early in the climb that averages 12% and, in fact, the first 6.1km average 8%, even with that easy beginning. With heavy legs and not being familiar with the climb, I started to wonder what I had gotten myself into. 9km/h, 8km/h — my Garmin was telling me what I already knew — I was in a world of hurt.

But as I struggled my way up the climb I remembered a statistic that gave me some hope. The 17km climb had an average gradient of 6% and I’d been climbing at much steeper than that for a while now. So either the road was about to flatten off considerably or possibly even head downhill. And then I remembered seeing a short descent during my brief look at the climb profile the night before. Awesome.

I didn’t know when that descent would arrive, nor indeed how long it would be, but just knowing that some respite was on its way was tremendously motivating. And then, around the very next corner, a glorious, big red sign stood proudly in front of me, bearing words I was more than happy to read: “Steep Descent”.

That 900m descent to Leather Barrel Creek was a godsend. Even just a brief moment to rest my legs and regain some composure allowed me to tackle the second half of the climb with renewed enthusiasm. 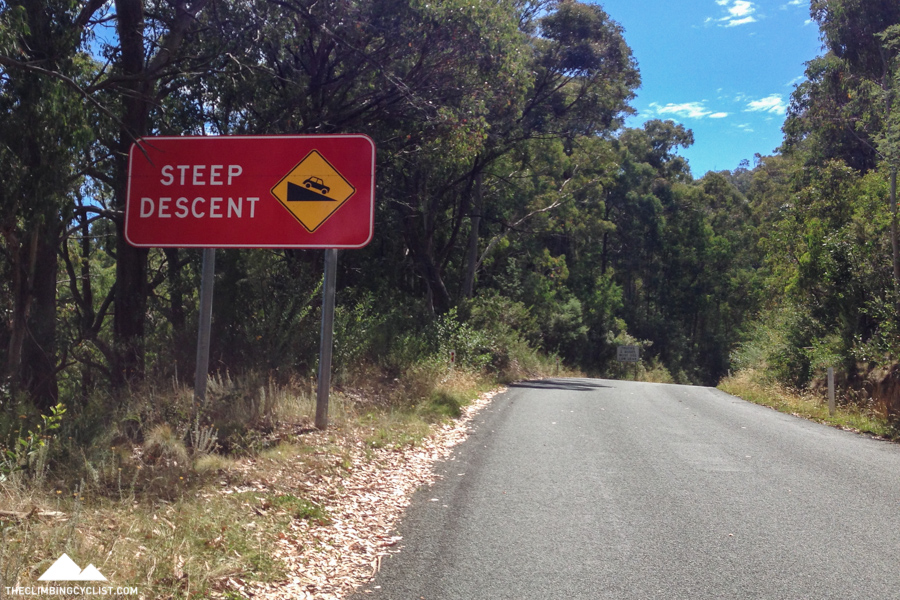 The Dead Horse Gap climb reminds me a lot of the Back of Falls — a tough opening followed by a moment of brief respite, followed by an easier second half. From Leather Barrel Creek it was a little more than 10km to the top an average gradient of 5% — very manageable.

The friendlier gradient gave me a chance to appreciate my surroundings a little more. Stunning weather, birds singing, wallabies bounding through the undergrowth, the occasional clump of roadside ferns, and all throughout, the most stunning eucalyptus forest. It was quintessential Australian bush, and I did everything I could do take as much of it in as I could.

As I approached the top of the climb the roadside flora changed, with straggly snow gums taking over from their more leafy cousins. Around the same time the road really flattened off and my spirits rose further. I could see a couple of riders up ahead for what might have been the first time all day, and their presence gave me added motivation to keep pushing.

Eventually, 85 minutes after leaving Tom Groggin, I reached Dead Horse Gap. The feeling of relief and satisfaction was overwhelming. Climbing any mountain by bike is satisfying, but conquering something like Dead Horse Gap for the first time, particularly having wanted to do so for a long time, was a moment to remember. Best of all, it was largely downhill for the remaining 40km to Jindabyne.

The Dead Horse Gap climb reminded me a lot of the Back of Falls, which is appropriate given the Peaks Challenge Falls Creek is on today. I wouldn’t say DHG is as hard as the Back of Falls but I was definitely happy to get to the top. Amazing country up here. #wymtm

The descent from Dead Horse Gap to the ski town of Thredbo (about 5km) was a thing of beauty. Not just because it was stunningly picturesque, but because the descent was fast, on a beautifully smooth road, with barely any traffic. Bliss.

I met Dad for a brief lunch at Thredbo, both of us marvelling at just how big the ski resort is. In my limited experience something like Mt. Buller is a big ski resort, but Thredbo takes it to another level. Despite it being in the middle of the green season, the place was packed with visitors. I shudder to think what it must be like in winter.

From Thredbo Dad and I agreed to meet at the caravan park in Jindabyne and I set off into the final 40km. I was definitely looking forward to the largely downhill ride that awaited and it didn’t disappoint. That’s not to say there wasn’t the occasional climb to remind me how fatigued my legs were, but for the most part it was a cruisy and fast ride.

One thing I noticed immediately after leaving Thredbo was just how much busier it was on the Jindabyne side of the mountain. For one thing there were lane markings on the road — a novelty after more than four hours without any — and the constant traffic took some getting used to.

The road surface was also noticeably rougher and I found myself descending on the smooth, raised yellow line whenever I could, just to make things that little bit easier.

It took me little more than an hour from Thredbo to reach the caravan park just outside Jindabyne and getting there was certainly a relief. I’d covered 111.3km and notched up more than 3,000m of climbing in 5 hours and 15 minutes of riding.

Setting up camp was a struggle and I felt like a zombie for the rest of the day. But the satisfaction of completing that ride and the memories from it will certainly last much longer than the discomfort did.

I slept well that night and I needed to. The following day would be just as tiring.

Big thanks to my dad, Ron, for his terrific support on the road and throughout the entire trip.

Click here to see my Strava file and see below for a video and photos from the ride.

22 Replies to “Cycling the Snowy Mountains: Khancoban to Jindabyne”