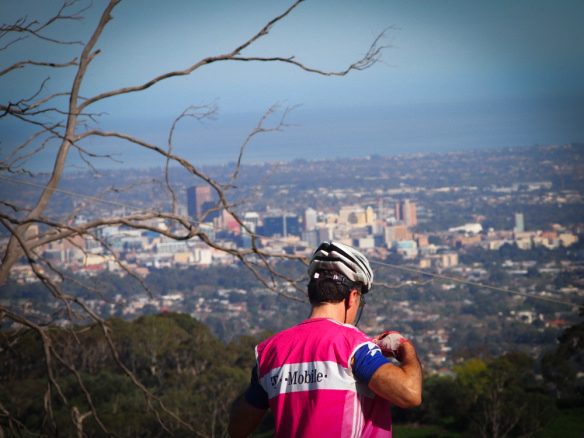 Now in its second year the Adelaide Dirty Dozen has staked its claim as the most challenging and most well-attended Dirty Dozen ride in the country. Some 75 riders attended last year’s inaugural edition and this year’s edition had much to live up to. But as ride organiser Adam Williss writes, the day was a great success with bigger crowds and greater support than the inaugural edition.

I’ll start with some data:

You know you have put together a difficult ride when Patrick Jonker, who finished 12th in the 1996 Tour de France, suggests that at the end of the Adelaide Dirty Dozen he felt the same as if it was day 14 of a Grand Tour!

But I get ahead of myself …

The day dawned perfectly — not a cloud in the sky — and it wasn’t long before people started gathering at Red Berry Espresso for a pre-ride coffee and a quick riders briefing before the 2013 Adelaide Dirty Dozen got underway.

Based on last year, my intent was for regular regroups to ensure that no-one got left behind, but with nearly double the number of riders joining in this year, and the wide variety of abilities that comes along with it, this hope very quickly evaporated. However, once the ride began everyone was soon spread out which made it safer (which solved my primary concern anyway) and (almost) everyone understood the route.

The first hill, the long steep Hayward Drive (Mt. Osmond), saw the more accomplished climbers clearing out ahead straight away and I decided to hold back to support the slower riders. A new climb for this year, the hill is a perfect warm up measuring 2.3km at 9.7% with a few sustained sections nearing 15%. It also brings magnificent views over the city.

We formed a little group prior to tackling the second climb of Gill Terrace (also new this year: 600m at 14.7%), including the newly named ‘The Guillotine’ at the end – an optional dead-end kicker of over 20% for around 150m – so named because it is basically a dubiously-surfaced narrow laneway that threatens all sorts of repercussions to your health if you get it wrong.

From what we heard, many of the earlier riders took the option of passing on that extension, but we certainly didn’t. I recall the rider I was following lifting his front wheel so far I thought he would topple backwards before he managed to unclip and get a foot down, not quite getting the whole way up.

The third hill of Heatherbank (another new hill: 600m at 10.3%) was just a comparatively short grind that didn’t present any difficulties for anyone. But I heard a crash just in front of me around halfway up the notorious Kensington Road, the fourth climb, and I saw someone lying horizontal on the road.

More embarrassed than anything else, he explained that he had cramped up so suddenly that he didn’t have time to get a foot down, and fell over sideways!

Kensington Road doesn’t sound particularly daunting at 1.3km at an average gradient of 11.5%, but it demands every bit of you. The climb slowly bends to the right and every time you go around a little bend, the road increases its gradient. By the time you are near the top you are peppering away at around 18% before it dips slightly to around 13% for the final 200m or so.

Although I felt a bit guilty for doing it, I left our little ‘gruppetto’ to fend for themselves on the fifth climb of Coach Road as I needed to move up the field to help coordinate the support cars for everyone else. Unfortunately the quickest riders were going far quicker than I had anticipated, so I am not sure how much support they received … or even needed? Hopefully you guys got something!

The reward for reaching the top of Coach Road — one of the toughest hills in the event stretching 2.4km at 9.8%, including ‘The Wall’ (200m at >20%) — was a new initiative this year, the ‘Dirty Dozen Cafe’, set up to provide some free nourishment for the riders.

A huge thanks must go out at this point to Walter from Red Berry Espresso who has really got behind this event. Besides being the start and finish host, Walter spent the week brewing some 4 litres of cold drip coffee that was served out to everyone in shots at the top of Coach Road. The little caffeine hit at this point was magnificent!

In addition, another rider had donated 50kg of bananas, and others with their partners had baked a selection of cakes, bars and cookies, all of which were available for riders whilst they took a breath with Adelaide stretched out beneath them.

From the top of Coach Road I stayed with a really supportive bunch of guys (including the Cervo Rosso crew) – some that I regularly ride with and some that I have never met, in a group that pulsed in size as we went.

Some riders we’d collect and swell in numbers, and other times we’d drop riders who couldn’t go on, or needed to rest. I guess on average there were about 12 of us at any one time. The common thread was that we would regroup at the top of the climbs, and offer no end of encouragement between us. It was just great!

The picturesque Knox Terrace was hill number six (1.4km at 9.4%) and this quickly came and went, as did Ridgeland Drive as hill seven (1.2km at 10.7%). Burdetts Road (nicknamed ‘Little Italy’ as the awesome backdrop could have been plucked from the Italian countryside) turned on its usual spectacular self as hill eight (1.7km at 7%) , before we reached the fourth new climb for the 2013 Adelaide Dirty Dozen.

Nicols Road was listed as a ‘dirty’ climb in that it was really two hills counting as one. It steeply descends into a beautiful, quaint valley and almost immediately rises steeply up the other side. The first direction ticks over 700m at 11.7% and the return leg is 500m at 12.9%.

Our little group ticked all of these climbs off easily enough, but the underlying fatigue was building such that by the time I crested the final ramp of Nicols Road, I could definitely sense a lack of power in my legs. With the final four climbs all in excess of 2km each and averaging around 10%, all the training and conditioning was about to be put to the test.

A reasonably long descent into the heart of the Adelaide Hills offered some respite, but what goes down, must come up! The bottom of hill 10, Knotts Hill/Pound Road (2.7km at 8%), was a bit of a slog, but I found a tempo fairly easily, so there were no dramas presented.

But hill 11, Fernhurst Road at Cherryville, again proved to hurt and sucked any life I had remaining in my legs. But I do love that climb!

It is a real hidden gem of a climb along a road that goes nowhere in particular, besides servicing a handful of orchards. Averaging 2.1km at 10.8% there are just no false-flats and no consistent pitch to find a rhythm. You just have to grit your teeth and enjoy the twists and turns along an escarpment giving sensational views over the Adelaide Hills.

I found hill 12, the famous Corkscrew, to be an absolute annoyance. Knowing what was to come on the final hill my legs had abandoned me, but I just had to struggle through what is probably one of the easier climbs of the event stretching 2.5km at 8.9%. I didn’t enjoy it at all. 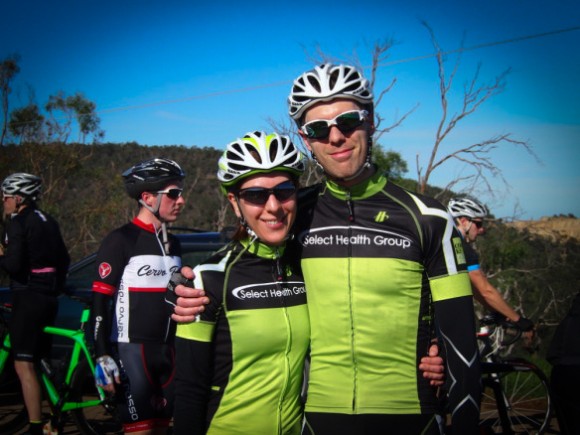 Another long descent and quick jaunt through the suburbs saw my anticipation rising, along with an underlying dread, as I approached the final climb. I knew I was so close to completing the second Adelaide Dirty Dozen. But one thing you can count on is that hill 13, Coachhouse/Woodlands Way (2.7km at 10.1%), is going to hurt. And hurt it did!

While it always points upwards, the climb consists of several ramps that get a bit longer and steeper each time, and it is fairly widely regarded as Adelaide’s toughest hill. Head down, sweat dripping off my face, legs forcing their way over one slow rotation at a time, it was definitely a psychological battle not to get off and walk once that final ramp of >20% was reached.

I summoned one final effort and hit the last 30m of that section hard in one deep breath and crested it too exhausted to do anything but pant like a dog while I made my way up the false-flat at the top of the climb. I don’t think a can of Coke has ever tasted so good. 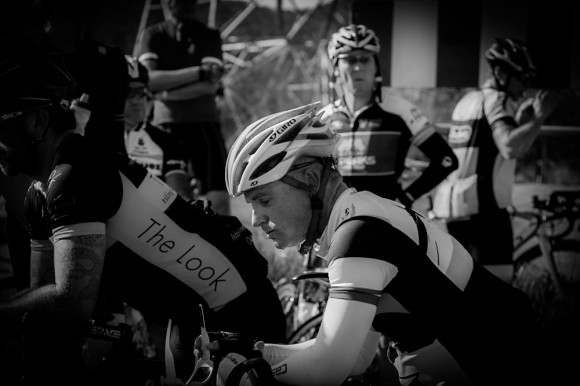 We arrived back at Red Berry Espresso just after 2pm (I think) and there were still plenty of riders hanging about having a coffee or a bite to eat. We were all exhausted and yet all absolutely bursting with self achievement.

Riders continued to drift in or depart alone, in pairs or small groups and I heard that the final riders to arrive back (whilst Red Berry was still open) was at 3.45pm — well over 8 hours after the start of the ride! Absolute kudos to you folk for finishing, whoever you are!!!

If you are looking to set your sights on a serious cycling challenge in Adelaide next year, block out the first Saturday of September for the 2014 Adelaide Dirty Dozen!

Congratulations to Adam Williss and the team for putting on such a great event and thanks to Adam for taking the time to write about the day. If you’ve got a climbing-related story you’d like to share, or a story idea you think we should investigate, please don’t hesitate to get in touch. Images appear courtesy of Wednesday Legs.