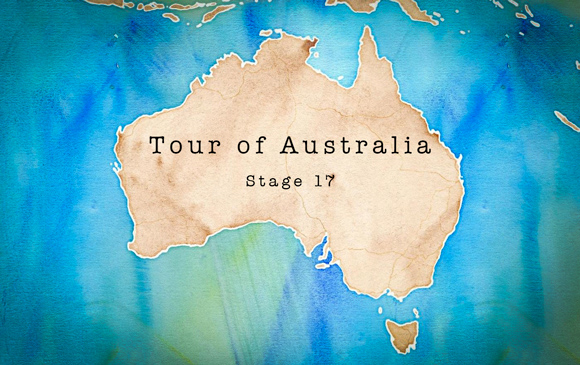 The 100th edition of the Tour de France is just about upon us, which got David Blom and I thinking: what would an Australian Grand Tour look like?

We’ve put together a course for a three-week race that takes in some of the best roads in the country in an attempt to create cycling’s fourth Grand Tour: the Tour of Australia. We’re currently revealing one stage per day in the lead-up to Le Tour and this is stage 17.

The previous day’s stage was tailor-made for the sprinters with only one climb, and a long, flat run in to the finish. Stage 17 is the polar opposite, a day all about the climbers and, arguably, the hardest day of the entire Tour of Australia.

Starting in Berry, roughly 80km north of Ulladulla where the previous stage finished, stage 17 features six challenging climbs spread over a 186km-long course. The first climb, the 2nd category Berry Mountain, begins just 3km from the start of the stage and sees the riders climbing for 6.5km at an average of 6.6%.

Taking a right onto Wattamolla Road after 15km the riders approach the second climb of the day. At only 1.9km long it’s the shortest climb of the day but the average gradient of 11.6% means it’s still a 3rd category climb. After summiting that riders descend the other side of the hill, completing a loop and ending up back in Berry after 34km. There’s an intermediate sprint point in the centre of Berry, at the same spot the stage started.

After heading down the Princes Hwy towards Nowra the riders turn right onto Moss Vale Road and, after 51km of racing, take on the third climb of the day. The Cambewarra Mountain is a 5.2km-long 2nd category climb that has an average gradient of 8%.

From the top of that third climb the riders head north, descending through Kangaroo Valley and staying on Moss Vale Road. The day’s fourth climb, the 2nd category Barrengarry Mountain, begins after 71km and sees the riders climbing for 7.6km at 7.4%.

Between the top of this climb after 78km and the 112km mark the road undulates through Wildes Meadow and Robertson before a fast descent to Jamberoo. Here, after 122km, the riders head north to Albion Park before turning left onto the Illawarra Highway.

The day’s fifth climb begins after 140km of racing and it’s the most well-known climb of the day: the 1st category Macquarie Pass. It’s a 12.4km effort at an average of 5.5% but with the final 2km being considerably flatter than the earlier sections, there are certainly some steep grades to contend with.

After 153km of racing, at Jamberoo Mountain Road, the riders turn left and retrace their steps, descending towards Jambaroo for the second time. Passing through the small town the riders take a right at the 180km mark and start the final climb of the day.

Saddleback Mountain isn’t the longest climb of the day but it’s almost certainly the hardest, if for no other reason than the stage finishes at the summit. The first 4.7km rise at an average of 8.4% and when the riders turn right at the gate to make their way up the final 500m to the summit, they won’t be too impressed. That final half-kilometre has an average gradient of 18% — a brutal end to an extremely tough day of racing.

This is one of the most crucial stage in the Tour of Australia. A breakaway (or several) will almost certainly set off early in the stage but you would expect the end of this stage to be all about the GC contenders and the pure climbers.  A bad day here could see a GC contenders losing big time on his rivals and similarly, a good day on stage 17 could set up an overall victory.

Expect to see the field slowly whittled away as the day wears on, with Macquarie Pass creating the largest selection. Only a select group will hit the bottom of Saddleback Mountain together and from there things will only continue to split apart as the road goes up and up.

Stay posted for stage 18 of the Tour of Australia, coming tomorrow.