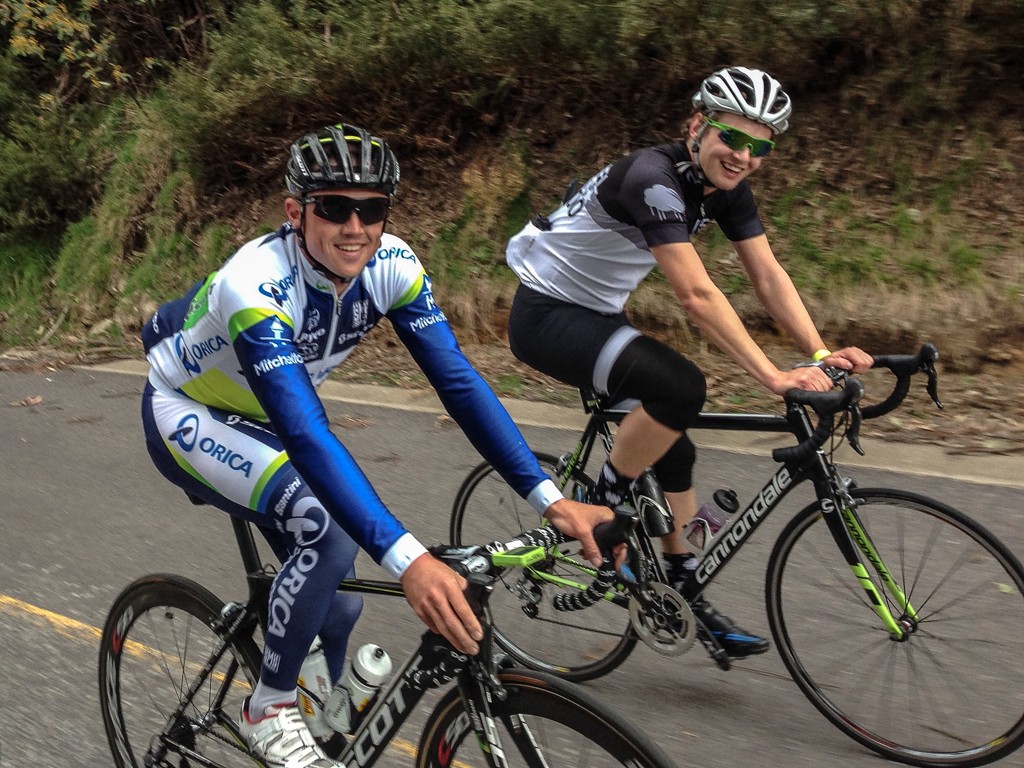 Click on any of the photos below to see larger versions.

In late September I got an email from Sally Brown at Tourism North East inviting me to “an intimate group ride with 7 Peaks ambassador Simon Gerrans up Mt. Buller” in early November. At that point I had barely ridden in months due to illness and I told Sally I might have to give it a miss, as much as I would like to have been there.

Thankfully my health improved in the intervening weeks and last weekend I got the chance to ride with one of only two Australians to have won a stage at all three of cycling’s Grand Tours.

The weekend’s festivities began on Saturday afternoon when I took part in the Sunset Mountain Challenge, a race up Mt. Buller organised by the folks at Peloton Tours. Roughly 25 of us took the start line at Mirimbah at 5pm, including a bunch of mountain bikers, a bloke on a retro ladies bike and some guy riding a fixie.

Having not done any significant climbing for several months (and being about 5kg heavier than I would like to be) I wasn’t expecting to be able to win the race, or even go close, but when I found out National Road Series rider Nick Squillari would be there, any remaining hope quickly faded away.

That didn’t stop me trying to hold his wheel. Straight out of the start line I stuck with him and a couple others who were setting the pace … before promptly fading away within 500m of the start. Reality check.

At the pre-race briefing earlier in the afternoon I’d bumped into Matt McCullough — he’s the guy that put together this great video from our Domestique 7 Peaks Series ride up Mt. Baw Baw last year. After my brief stint at the head of the field I dropped back to join Matt who was riding at a more sensible and manageable pace having also had a quite few months cycling-wise.

Within a couple of kilometres it became quite clear that the climb wasn’t going to be anywhere near as enjoyable as I might have hoped. Actually that’s not entirely true — I had realised the moment Matt and I started our warm-up at the base of the mountain.

A lack of fitness combined with the five extra kilos I’d acquired over winter ensured that the vast majority of the climb felt pretty unpleasant. I was short of breath, my legs were unresponsive and in general it just felt a lot harder than I’m used to.

Matt and I rode the whole way to the summit together, neither of us coming out of our respective pain caves to say anything all that often. Still it was great to be able to share the suffering with someone and to share the relief of crossing the finish line.

As predicted, Nick Squillari managed to win the race overall, with an impressive time of 46 minutes. Matt and I had taken roughly 1:13 to make it to the top, 17 minutes slower than my best effort up there.

The Sunset Mountain Challenge formed part of the Cycle Salute festival of cycling which has been running in Victoria’s high country for a few weeks now. As part of the festival there were also a bunch of films being shown on the Saturday night at the Mt. Buller cinema.

A bunch of us headed over there after dinner and caught the second half of a fascinating and inspiring doco called Bikes for Africa; a film about one couple’s quest to set up a self-sustainable bike workshop in rural Namibia. I’d highly recommend trying to get your hands on a copy but in the meantime, check out the trailer below.

The following morning I woke up and checked the weather forecast for Mt. Buller: a maximum of 4ºC with snow showers. A quick look out the window showed a mountain covered in thick fog with visibility barely more than 20 metres. This was going to be interesting.

After breakfast I rugged up for the cold descent before flying down Mt. Buller to Mirimbah. We were meeting Simon at 11am at the Mirimbah tollbooth so I had a bit of time for a quick warm up.

My legs felt heavy from the previous evening’s exertions and I was feeling slightly apprehensive. I was worried I wouldn’t be able to keep the pace with the other riders, even if Tourism North East’s Steve Plummer had told me Simon would be happy to take it easy. You never want to be the guy holding everyone else up.

Six of us journos and bloggers met up at Mirimbah just before 11am and waited for Gerro to join us. At 11am on the dot he rolled into view, made his way to the tollbooth, introduced himself to everyone and then the seven of us were off.

I figured I’d stand less of a chance of getting dropped if I was up the front riding at a pace that I could handle so I joined Simon and together we started the 15.9km climb up to the Mt. Buller resort.

Over the next hour and a bit the six of us journalists and bloggers moved around the group, all of us getting a chance to throw questions at Simon. And full credit to Simon here — he was very patient, answering questions he’s probably been asked 100 times before, never sounding like he wasn’t interested and never showing that riding with us felt like a chore.

He spoke about all manner of things, from Ryder Hesjedal’s doping admission (disappointing), to the new riders joining Orica-GreenEDGE in 2014 (the Yates brothers are an exciting prospect); from his recovery after breaking his hip at the Vuelta a Espana (he’s fighting fit now) to his plans for when he stops racing professionally (he’d love to get into the business side of pro cycling).

One of the most interesting things he spoke about was how his climbing ability compares to that of pure climbers like Nairo Quintana or Joaquim Rodriguez. Gerro told us that he can match it with those guys at about 450-460 watts for about 12-15 minutes but if a climb’s any longer than that he just can’t hold on. That’s why the Ardennes Classics suit him so well — they feature short, punchy climbs that allow Gerro to stay with the best climbers, before punching away in the final. 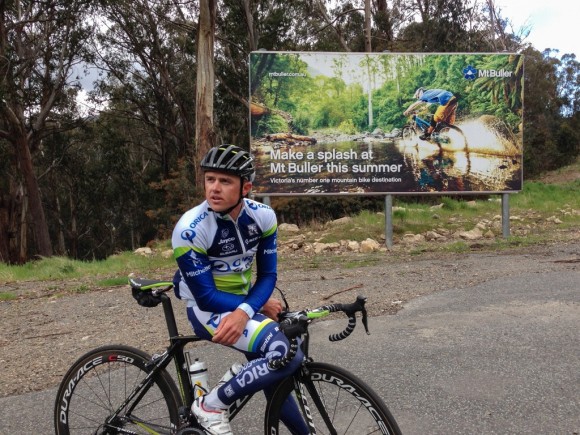 After struggling so much on the Mt. Buller climb the night before, I actually felt alright on the Sunday. It was more or less a threshold effort the whole way up (apart from the brief photo stop we took) but even working that hard my legs and lungs felt fine. I don’t know if it was because I was so focused on not getting dropped, or because the previous day’s ride had cleared out some of the cobwebs, but I certainly felt more comfortable than I had on Saturday.

The weather had been largely agreeable most of the way up the climb but as we made it into the final 4km the temperature dropped sharply and a few snowflakes started to fall around us. You could barely call it snow, but it was still pretty cool.

When we reached the final 1.5km of the climb our group of seven had been whittled down to four and I was teetering on the edge of the red zone. The moment we swung around that right-hander that marks the start of the final steep push to the village I fell over my lactate threshold and blew up. As Simon, Nick and Gavin made their way up the infamous Hell Corner, I drifted unceremoniously backward, trying to let my body recover before the final push to the top.

I reached the Mt. Buller village a minute or so behind Simon, Nick and Gavin and we waited for the rest of the crew to arrive. After a bunch of photos in front of the Mt. Buller sign we all went our separate ways, checked out of our hotels and then regrouped at the Powder Bar for lunch and another chat with Simon.

Click here to see my Strava file from the ride with Simon Gerrans.

We made it! #7peaks pic.twitter.com/PnQXtsMVTu

Chatting to Simon on Sunday I was reminded that there’s far more to being a professional cyclist than simply racing your bike. You’re an ambassador for your team, your country and indeed for professional cycling as a whole.

I was extremely impressed by the way Simon handled himself with us; a group of strangers that spent the best part of three hours throwing questions at him. No question went unanswered, it never seemed like it was a chore for him and he genuinely seemed to enjoy spending time with us. Even little things like rocking up exactly on 11am showed that he takes his role as 7 Peaks ambassador seriously and we all really appreciated that.

I drove home on the Sunday afternoon feeling energised and inspired. I’d struggled with the ride on the Saturday but I’d come good the following day. I was heartened by the fact that things are starting to feel a little easier every time I get on the bike now and I’m looking forward to the road ahead. I just need to do something about these extra kilos!

I’d like to say a big thank you to Iain and the team at Peloton Tours for the invite to race on the Saturday night. I hope the event continues to grow and that I can give it a proper crack next time around! Thanks to Sally, Steve and the gang at Tourism North East for the invite and for looking after me.

Thanks to the team at Mt. Buller Resort Management and the Arlberg Hotel for having me along for a lovely weekend. And thanks to Simon Gerrans for his time on Sunday morning and for his willingness to answer all manner of questions we threw at him. And finally, thanks to you for reading!

Disclosure: I stayed at Mt. Buller as a guest of Mt. Buller Resort Management and my stay included all meals and accommodation. My entry into the Sunset Mountain Challenge was covered by Peloton Tours, as was my entry to the film festival. 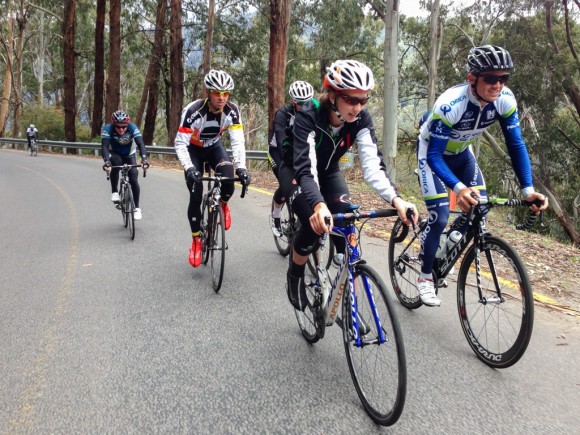 18 Replies to “A ride with Simon Gerrans and 'racing' up Mt. Buller”