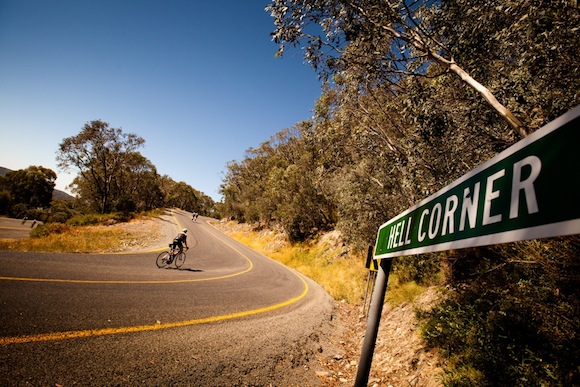 It was with a mixture of excitement and sadness that we arrived at the Mirimbah Picnic Ground last weekend and started setting up for the final ride in the Domestique 7 Peaks Series: a climb up Mt. Buller.

Excitement because a great crowd was starting to build and I was looking forward to getting the ride started; sadness because the series was almost over for another year.

As always with these rides it’s hard to tell how many people had turned up just by scanning the crowd. There were riders everywhere – lying in the shade under the trees, chatting to one another elsewhere in the park, and queuing up for hydration and nutrition thanks to our terrific sponsors Hammer and Winners. 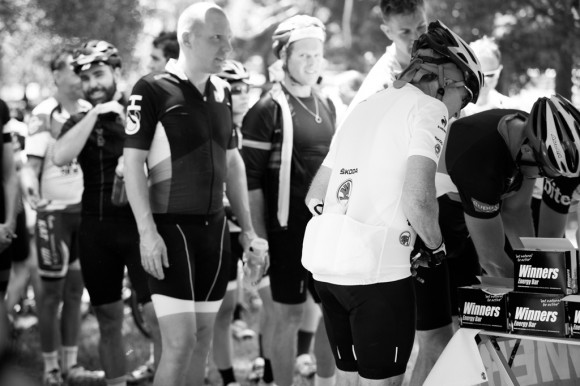 A little after 2pm we gathered everyone together and delivered the final pre-ride briefing of the series. Steve Plummer from Tourism North East (the organisation behind the 7 Peaks Alpine Ascent Challenge to which our series is connected) said some words about Mt. Buller and 7 Peaks and introduced two guys who had taken 7 Peaks to a whole ‘nother level: Joel Nicholson, who rode all 7 Peaks in one 90-hour ride, and Ian Michelson, who now holds the record for the fastest completion of all 7 Peaks (a touch under 24 hours).

With the formalities out of the way it was time to send riders off. Unlike on previous rides where we’ve had to employ waved starts, at Mt. Buller we had a road closure which meant it was an awesome free-for-all at the start.

Andy and I hung around until the last riders had left, helping our amazing volunteers to pack up the tents and other bits and pieces that we’d set up at the start. And then it was off up the hill in brilliant sunshine, to enjoy the final ride in what has been a thoroughly enjoyable and satisfying series. 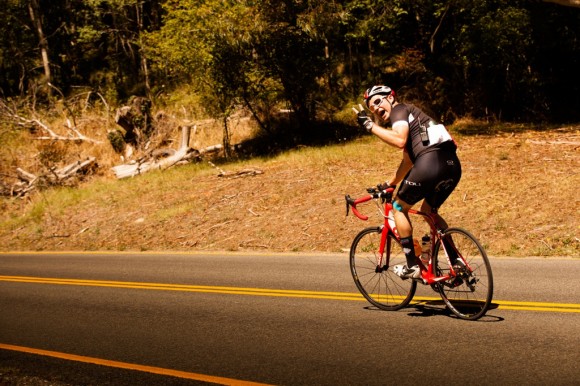 Before too long we were stopping by the side of the road with a handful of other riders. One of the riders had been climbing with her mates when she suddenly passed out and fell off her bike. Thankfully our ride doctor, Dr Carl Le, and nurse Ethan Edwards were just a few hundred metres down the road and were able to assist the rider straight away.

After being sick all week, suffering from dehydration, and trying to keep up with mates, the rider had lost consciousness briefly. But in a few minutes she was fine, sitting up and talking. Her partner rode back down the hill and picked up their car then came and returned to collect his partner.

As the two of them drove home, Andy, Carl, Ethan and I continued our way up the hill, passing a few riders here and there. 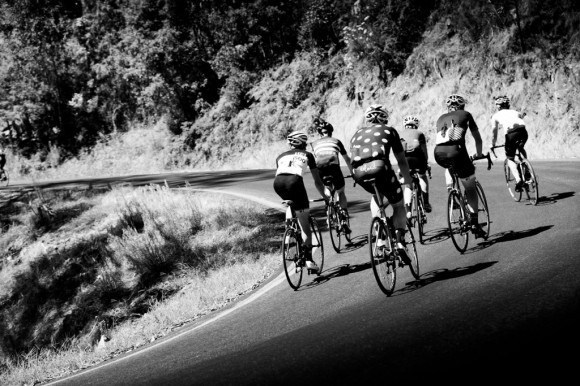 There was nothing spectacular about the pace we were riding – Andy was tapering for his Everesting attempt the following weekend (where he was scheduled to climb Mt. Buller nine times) and I was paying the price for not grabbing enough food and drink. In the rush to make sure everything was set up pre-ride, I’d forgotten to check if I had enough nutrition myself. As it turned out I didn’t, so it was a bit of a slow drag up the hill.

But it was an enjoyable slow drag. Andy and I took the opportunity to speak to the riders we came across along the way and soaked up what was perfect weather for cycling — beautiful sunshine, temperatures in the mid-to-high 20s and very little wind.

In fact, I think it’s fair to say we’ve been blessed by good weather all the way through the series. With the exception of Falls Creek (which was uncomfortably warm) and Mt. Hotham (which was very windy at the top), every other ride has had great weather. We certainly haven’t had anything even close to the torrential downpour that hit Mt. Buller last time around. That was quite something. 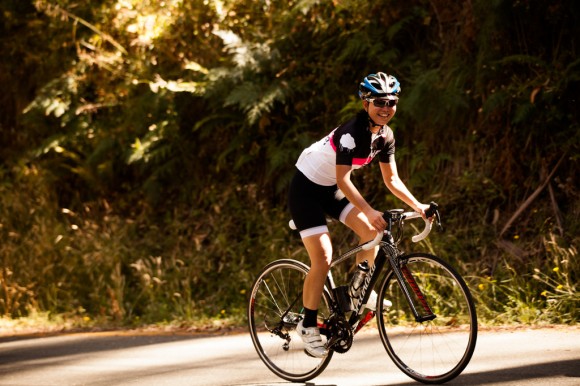 Before too long we got to the top where music was playing and riders were gathered, chatting about their rides and enjoying the great buzz. The folks at the Mt. Buller resort had been fantastic in helping us to organise a great atmosphere at the top of the climb and I reckon it really added to the experience.

Most of the riders were there by the time Andy and I arrived and more than a few had started to descend. But the buzz continued till late in the afternoon when those of who were staying on the mountain got packed up and headed off to dinner.

We were lucky enough to have a bunch of other activities on the mountain over the weekend, including a buffet dinner at the Arlberg Hotel and a screening of the classic cycling film Hell on Wheels at the Mt. Buller cinema. Some of us also hired mountain bikes on Sunday which was a great day out, rib-breaking crashes aside. 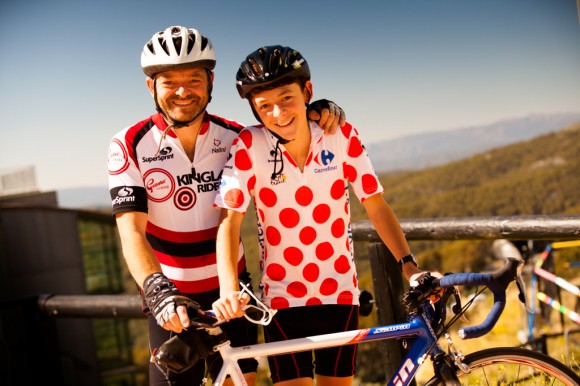 In closing I’d like to thank our amazing volunteers without whom these events simply wouldn’t be possible. I know it’s a cliché to say that, but it’s true – Andy and I simply couldn’t do everything that is required to bring these events to life without the assistance of some wonderfully support friends and family.

So, thanks to Andy’s wife Tam, to my dad Ron, to Nicole van Bergen, Rohan Wills, Dr Carl Le, Ethan Edwards, our series photographer Kirsten Simpson and to our incredible lanterne rouge for the day, Aaron Keefe.

I’d like to make special mention of Aaron who really exemplified what it means to be a lanterne rouge on one of these rides. He was incredibly patient and supportive at the back of the field, taking the opportunity to experience the climb in a different way. We’d like to say thanks to Aaron by presenting him with the CyclingExpress.com voucher for the ride. Well done Aaron, and thanks again!

And so to our terrific sponsors who have provided much needed support (financially and otherwise) to help us pull this series together. To CyclingExpress.com, Winners Nutrition, Croydon Cycleworks, Hammer Nutrition, Nemisis, CycleCover and Racecomms we’d like to say a big thank you. 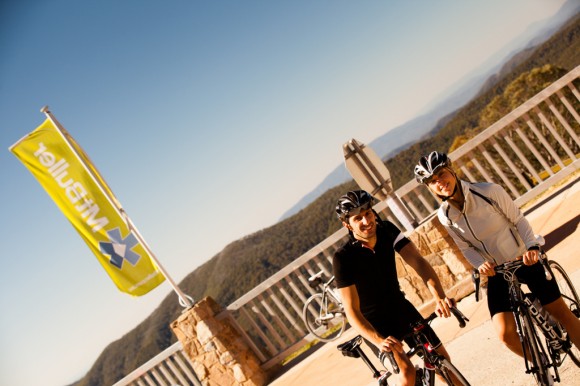 The rides in the 2013-14 Domestique 7 Peaks Series might be over but there’s one final event for the summer that we’re very much looking forward to: the series wrap-up party. We’ll be heading to the A Bloc bike shop/café/bar on Friday March 14 to bring things to a close and to launch a photography exhibition by the wonderful Kirsten Simpson. You can find all the information you need here. To RSVP, head to the Facebook event page or send us an email.

And finally, I hope you Kirsten’s fantastic photos from the Mt. Buller ride which you can see in this post. You can download low-res versions of any of the 300+ photos Kirsten took on the day by heading to her website and using the password “BullerBunch”. We also encourage you to buy a photo or two, for just $8 each, to support Kirsten’s great work.

Thanks very much for reading and I hope to see you at A Bloc next week!

To see a full list of finishers from the Mt. Buller ride, click here. If your name isn’t on the list and it should be, flick us an email with a link to a Strava file or equivalent.

To read more about the ride, check out these posts from She Road Bikes, Beyond the Call and BRB Cycling.