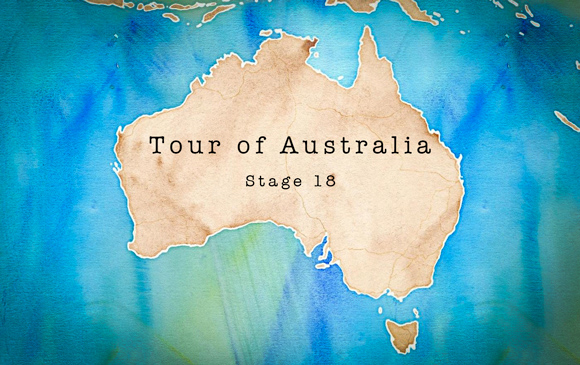 The Tour de France is just around the corner and it got David Blom and I thinking: what would an Australian Grand Tour look like?

We’ve put together a course for a three-week race that takes in some of the best roads in the country in an attempt to create cycling’s fourth Grand Tour: the Tour of Australia. We’re currently revealing one stage per day in the lead-up to Le Tour and this is stage 18.

Click here to see the route on RideWithGPS, including the location of the intermediate time checks.

It’s been a long time between drinks for the time trial specialists with the last solo effort against the clock being the prologue 18 days earlier. The stage 18 time trial, which hugs the Tasman coast from Scarborough to Loftus, is the third-to-last stage of the Tour of Australia and, as such, will prove extremely decisive.

The 42km stage 18 ITT course certainly isn’t flat. In fact, a succession of climbs and descents means the riders have very little flat road to play with at all.

The toughest climb comes after 7.5km, starting with 1.3km at 9.8% before a further 2.4km at 3.2%. From the top of that rise there’s a lengthy descent which sees the riders pass through the first time check in Lilyvale after 16.4km. At the bottom of the hill after 22km there’s a 500m rise that averages 12% before a series of short rises takes the rider to the highest point of the course, and the second time check after 28.5km.

There’s another descent to the 34km mark at which point the road heads up for another 2.1km. From the top of that rise it’s all downhill to the finish at the Audley Boat Shed, aside from a short rise just after the rider crosses the Hacking River.

This is the sort of time trial that you’d expect one of the GC contenders to win: that is, a rider who is strong and powerful but who can also climb well. Think Alberto Contador or Chris Froome. A pure time trial specialist like Fabian Cancellara or Tony Martin might struggle with the climbs on this course — particularly the steeper rises.

Stay posted for stage 19 of the Tour of Australia — the penultimate stage — coming tomorrow.

One Reply to “Tour of Australia: stage 18”