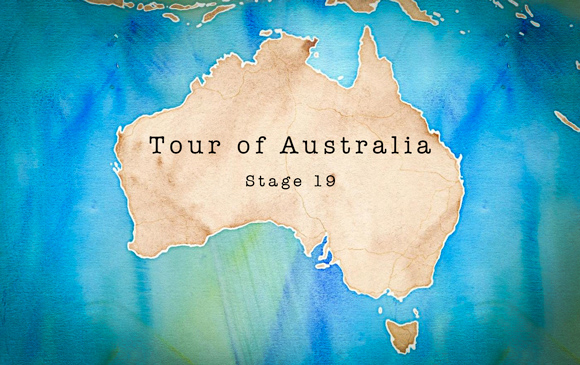 The 100th edition of the Tour de France is just around the corner, which got David Blom and I thinking: what would an Australian Grand Tour look like?

We’ve put together a course for a three-week race that takes in some of the best roads in the country in an attempt to create cycling’s fourth Grand Tour: the Tour of Australia. We’ve been revealing one stage per day in the lead-up to Le Tour and this is the penultimate stage: stage 19.

After a brutal day in the mountains on stage 17 and the hilly individual time trial on stage 18, we’ll get a sense of who’s going to be standing atop the podium when the Tour of Australia comes to a close in one day’s time. On stage 19, the penultimate stage of the Tour, the riders face another challenging day of climbing in the hills west of Sydney. None of the day’s four categorised climbs are long but they’re all steep and likely to be very selective.

Starting in Richmond, roughly 60km north west of Sydney, the riders take Bells Line of Road away from the NSW capital out towards Kurrajong. The first 11km of the stage are gradually uphill before the day’s first climb, the 2nd category Bellbird Hill climb starts. The climb is 4.2km long at a pinchy 8.1% and sure to put some riders in difficulty quite early on.

From the KOM point at the top of that first climb it’s a gradual uphill drag along Bells Line of Road through Bilpin and Berambing. At the 39km mark the riders take on the second categorised climb of the day: the 4th category Mt. Tomah. This climb might only be 1.4km long but at 9.4% average gradient it’s likely to force another separation in the field.

From the summit of Mt. Tomah there’s a short descent before the uphill drag continues to the outskirts of Lithgow at which point the riders descend into town to contest the stage’s only intermediate sprint after 78km of racing.

Heading south out of Lithgow on McKanes Falls Road the riders enjoy a rare section of flat road before descending to the 91km mark. From here the day’s 3rd categorised climb begins. With an average gradient of 6.5% this 2.2km 4th category climb is the easiest of the recognised climbs of the day. From the summit the riders continue south on Jenolan Caves Road climbing gradually over the next 30km as they pass through the stunning Jenolan State Forest.

After 124km of racing the riders begin the narrow and technical descent towards the Jenolan Caves, the oldest discovered open caves in the world and one of the most popular tourist destinations in NSW. The riders will have no time for sightseeing though because as soon as they hit bottom of the descent the day’s final and most challenging climb begins.

Challenging might be a bit of an understatement: this 4.3km-long 1st category climb has an average gradient of 11.2% and is sure to wreak havoc on the main field. From the summit of the Jenolan Caves Road climb there’s still 27km to the finish in Oberon, most of which is flat or downhill.

This long run-in to the line will allow some riders to get back on terms after being dropped on the final climb, but it’s not going to be a day for the sprinters. Riders in the breakaway would need to summit the last climb with a sizeable time gap as their lead would be whittled down in the dash to the line. That is unless the GC contenders let a breakaway go.

You wouldn’t expect any of the contenders for the overall victory to make up a huge amount of time on this stage, but that wouldn’t stop them from trying. It would be fascinating to see if the second or third placed riders overall could attack on the final climb and get a gap and, crucially, whether they could hold that gap in the easy run in to the finish.

Stay posted for the final stage of the Tour of Australia, coming tomorrow.