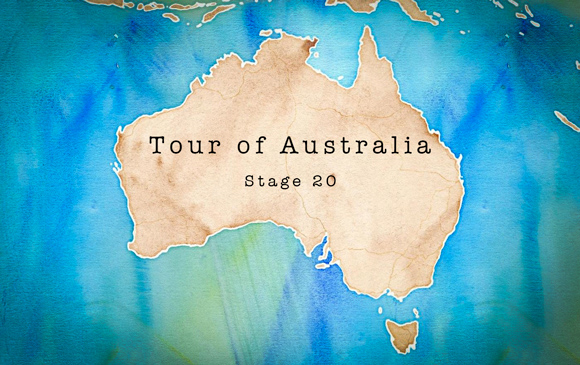 It’s less than a week until the 100th edition of the Tour de France begins and David Blom and I have been thinking: what would an Australian Grand Tour look like?

We’ve put together a course for a three-week race that takes in some of the best roads in the country in an attempt to create cycling’s fourth Grand Tour: the Tour of Australia. Over the past three weeks we’ve been revealing one stage per day and here is the final stage.

And so, after three weeks of tough racing, beautiful climbs and amazing scenery the Tour of Australia comes to a close. The general classification would have been decided in the previous few days leaving the final stage as a lap of honour for the winner. The KOM classification would also have been decided, but with an intermediate sprint and a flat finish to contest, the battle for the points jersey would still be live on the short final stage.

The stage begins alongside one of Australia’s most iconic stretches of sand: Bondi Beach. Heading west the riders pass the suburbs of Woollahra, Ultimo and Camperdown before heading north after 20km, just to the east of Sydney’s Olympic Park.

Thus far the stage has been largely flat but after crossing the Parramatta River and heading north east, there’ll be a number of short climbs and descents for the riders to deal with. Passing through St Ives the peloton follows Mona Vale Road through Terrey Hills and Ingleside before reaching Sydney’s northern beaches.

Heading south through the beachside suburbs of Collaroy, Dee Why and Freshwater the riders will ready themselves for the final intermediate sprint of the Tour of Australia in the famous seaside suburb of Manly. The bunch then turns inland again passing through Fairlight and Seaforth before crossing the bay at The Spit after 75km.

Heading south west through Cremorne and Neutral Bay the rides join the Warringah Freeway in Kirribilli before riding over Australia’s most famous bridge: the Sydney Harbour Bridge. By the time the riders have crossed the bridge there’s less than 10km left in the stage and you could expect the sprinters’ teams to be directing proceedings at the front.

Coming off the bridge the riders head east through Circular Quay before heading south on Macquarie Street. This final section of the course is quite technical, almost like a city centre criterium, and riders who want to contest the final sprint will need to be well positioned as they come off the Sydney Harbour Bridge.

After 87km the riders head north east through the famous Domain Park, continuing through the Royal Botanic Gardens before a sharp waterside right-hand hairpin at the 88km mark. Positioning on this corner will be crucial.

The riders then retrace their steps back through the gardens and Domain Park before doing a lap of Sandringham Gardens. Again, with tight corners to contend with positioning will be key for those that want to contest the final sprint.

The riders finish their lap of Sandringham Gardens after 91km and from there it’s a 1.5km dead straight drag all the way up Macquarie Street to the finish in front of the iconic Sydney Opera House with the Sydney Harbour Bridge looming large overhead. A few alterations to existing road furniture might be needed to make this final sprint a reality but it would certainly make for a picturesque and memorable finish to three tough weeks of racing.