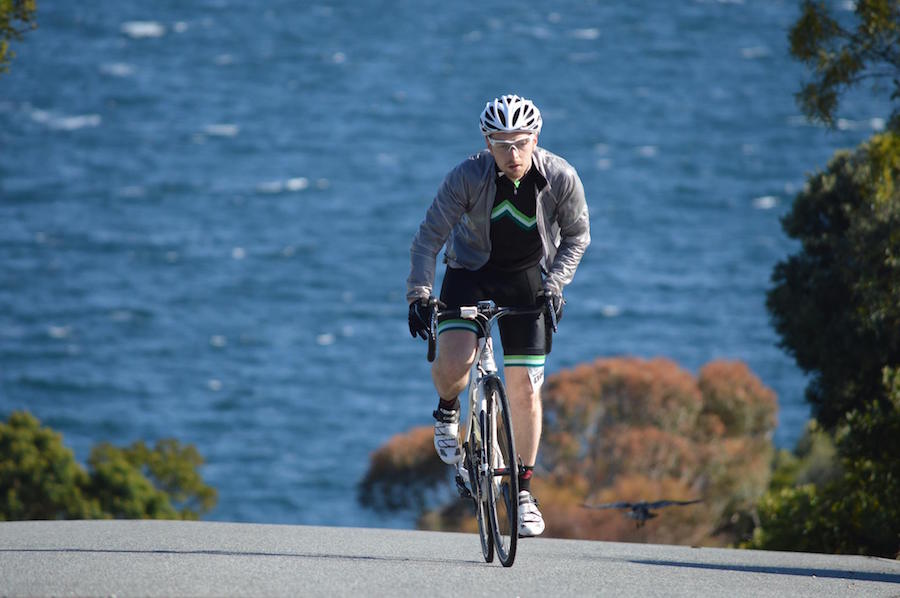 UPDATE: Scroll down or click here to see my DD17 vlog.

We saw the storm coming, first as an orange and red splodge on the Bureau of Meteorology radar and then as a black mass that took over the sky. Arthurs Seat, which had loomed on the horizon just minutes earlier, disappeared from view, the darkness rolling in overhead.

The wind picked up, and then came the rain — light at first, and then much heavier. Hail followed, as did lightning and thunder. We stood under a pair of marquees, sheltering from the storm front.

The rain was coming in sideways, soaking us and everything we’d tried to put undercover. Riders that had been mingling near the start area, ready to sign on, disappeared back into their cars, seeking shelter from the torrential downpour.

I couldn’t help but feel demoralised. All the hard work to pull this event together — the 100+ hours of work — was being undone by bad weather.

I knew in the days before DD17 that we’d have some rain to contend with, but I was just hoping it wouldn’t last as long as it did at last year’s event in Warburton — i.e. all day. It wasn’t promising when the storm hit at 7:30am, just as we were getting set up, with rain heavier than I’ve seen in a long time.

Thankfully, after just a few minutes, the storm blew past and the rain abated. The dark clouds disappeared, Arthurs Seat returned to dominate the horizon, and blue sky even started to poke through the overcast sky. Things were taking a turn for the better.

As the weather continued to improve, riders emerged from their cars again. My dad Ron and step-mum Sue helped sign riders in, giving them a ride map, some nutrition from Winners Cycling, and some ANZAC biscuits that Sue had made. With that, the riders were off and into the ride.

I mingled at the start, chatting to riders as they turned up. At 8:30am, an hour into the 90-minute start window, I joined my co-route designer David Blom and my best mate Nick and started the ride.

I’d ridden the course earlier in the year, so I knew what I was in for. But I’d never been as unfit for a Dirty Dozen as I was for Sunday’s ride. It was going to be an interesting day.

The warm-up around the back of Martha Cove helped to wake the legs up before the opening block of five climbs in Mt. Martha. On the very first ascent I knew I was in for a tough day — Nick and David rode away easily, and I was left on my own, trying to measure my effort for the ride ahead.

As we ticked through those opening climbs, I got great delight in seeing the groups of riders making their way around the course, tackling the climbs, stopping at the summits to check the map I’d made. Seeing so many people embracing the spirit of the ride, and enjoying it, made all the hard work worth it.

And while I was already feeling my legs in those opening climbs, we had the benefit of a strong tailwind for each of those Mt. Martha ascents. And a decent tailwind it was too — when you can feel the wind having an effect on a 13% gradient, you know it’s blowing pretty strongly.

From Mt. Martha we made the transfer across to McCrae to tackle the bonus/transition climb, and then two official ascents. The sixth climb of the day, which featured three small laneways, was one of my favourites. Judging by the feedback from many riders I spoke to I certainly wasn’t alone.

With the two McCrae climbs done, we made our way back down to sea level before riding back along the beach to Dromana. It was there that we’d tackle the final six ascents of the day.

By Climb #8, Mary/Manna I knew the last few were going to be really hard. I knew from experience that the final climbs got harder as we approached Arthurs Seat, and I was battling already. I scrapped my way through Climb #9, Scott St, before tackling Hillside Ave.

It was on this, the day’s 10th climb, that I started to worry. Halfway up, as the gradient sat well beyond 10%, my hamstrings started to cramp up. I was paying for my lack of fitness and with three tough climbs still to go, I was genuinely worried I might not make it through.

If you’ve ever ridden Arthurs Seat from the Dromana side you’ll be familiar with Caldwell Rd. It’s that imposing wall of bitumen that lies in front of you as you ride up from the beach, just before you turn right to the main climb. On Sunday, we wouldn’t be avoiding Caldwell.

It’s every bit as hard as it looks, and the fact the road is straight only makes it that much more demoralising. Thankfully my hamstrings were behaving themselves and, somehow, I was able to grind my way to the top. Eleven down, two to go.

Climb #12, Towerhill/Bracken Ridge wasn’t the hardest climb of the day, on paper. According to our course map the climb officially ended at a gate after 900m, but I knew the road extended beyond that point (at 25%!). Taking a brief detour from the event, I extended the climb slightly, enjoying the sensational views from the end of the bitumen. So hard, but so worth it.

From there, just one challenge remained: Arthurs Seat. In previous editions of the Dirty Dozen, we’ve finished the ride with the steepest, most challenging ascent of the day. In Dromana, we mixed it up a little.

Arthurs Seat isn’t the steepest or most challenging climb in the region, but it is the most iconic. It’s also the longest (3km), and its average gradient of 8% certainly can’t be ignored.

It was a long, painful slog to the top — the three kilometres felt like they took a lifetime. Thankfully, the views on the way up were spectacular — a terrific reward for a hard day’s ride.

At the top I rejoined Nick, Dave and my brother Brendan (who’d set off earlier) and together we rolled back to the Dromana Recreation Reserve for lunch.

As rewarding as the Dirty Dozen rides are, I always find the post-ride BBQ as memorable, if not more so. I love chatting with other riders about their experience of the day, to find out what they enjoyed. It’s always such a positive vibe — riders are exhausted from their efforts, but buzzing from the fact they managed to get through it.

For me, there’s another kind of satisfaction in the post-ride BBQ too. When I arrived back at the park on Sunday it was to see the BBQ in full swing, my family having taken the reins and gotten everything going as planned. My brother Ash, on a one-week visit from Europe, was manning the BBQ. Sue and Brendan’s partner Anneka were handing out food. Dad, a Dirty Dozen BBQ veteran, was overseeing the whole production, making sure everything ran smoothly.

It was such a satisfying feeling to be able to leave that aspect of the ride in their hands, knowing that it would all turn out great. And it did. I couldn’t be more grateful.

To that end, I’d like to finish up by saying a few thank-yous. Thanks to Dad, Sue, Brendan, Anneka and Ash for their invaluable assistance on the day. A special shout-out to Sue for making hundreds of biscuits in the lead-up (without being asked!), and to Ash for helping me chop onions and coleslaw ingredients for hours the day before the ride.

Thanks to David Blom for suggesting Dromana as a location, for his help in designing the course, and for his company on the day. Thanks to Nick for his company as well (he rode to and from Dromana, for a nearly 220km ride!) Thanks to my long-time co-conspirator Andy van Bergen for his ongoing support in the lead-up (and props for riding home from Dromana).

Thanks to Brendan Edwards and Jeff Servaas for coming along and taking great photos (which you can see in this post and here, here and here), all off their own bat. A big thank you to Winners Cycling for their ongoing support of grassroots cycling events.

And of course thanks to those of you that braved the weather to take part in DD17. I think we can all agree that, after that initial downpour, it turned into quite the magnificent day on the bike. Thanks for being part of it. It’s a day I won’t soon forget.