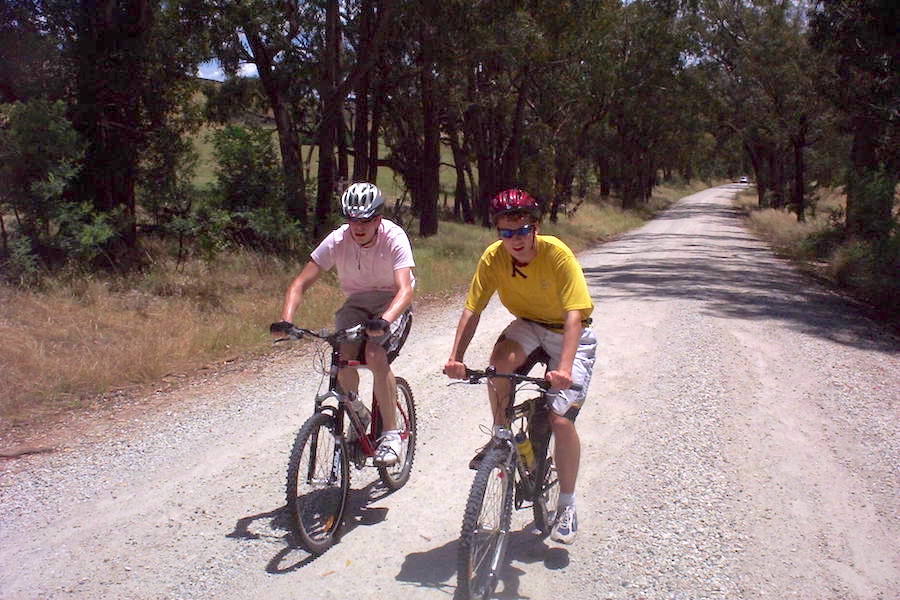 In every December from 1999 to 2004 I went on the Box Hill High School Bike Camp, a five-day adventure ride through north east Victoria, featuring four days of riding and four nights of camping. We’d take the V-Line train from Melbourne up to the country town of Wangaratta on the Monday morning, then spend the next few days riding a big loop through towns like Eldorado, Beechworth, Yackandandah, Myrtleford and Milawa, before heading back to Wangaratta and taking the train home on Friday afternoon.

Looking back now, the daily distances we rode don’t seem that significant — two days of 25km, one of 55km and one of 60km — but at the time they were far from easy. The longest day, a 63km jaunt from Beechworth to Myrtleford was always taxing, particularly on heavy mountain bikes and in the hot December sun.

Those six visits to country Victoria were some of the best times I had as a student. The riding, the feeling of freedom, the chance to unwind after a year of school, the socialising and hanging out with mates — it was the perfect week for an active kid who loved riding his bike, camping, and just spending time in the great outdoors.

My best mate Nick went on a bunch of those Bike Camps, too, and together we shared many quality hours in the saddle and around the dinner table. He, too, looks back on Bike Camp with great fondness. Now a B-grade racer, he credits Bike Camp with kindling his love in the sport — “I don’t think I would have been a cyclist if it wasn’t for Bike Camp”, he told me recently.

Many years later and Nick and I have done a couple of amazing bikepacking adventures together – a four-day trip through the Otways and a three-day ride through the Strzelecki Ranges. When we started discussing our next adventure it wasn’t long before we settled on the idea of heading back to north-east Victoria to ride the Bike Camp route more than a decade since our last visit.

The only difference: we’d do the 165km route in one day, rather than five.

I was pretty sure that I remembered the route, but I was a little hazy on a few of the details. I sent an email to Box Hill High School and was connected with two teachers that had been at Bike Camp when we were there: David Leigh and Roslyn Green. While the Bike Camp route has changed since Nick and I were at school, David and Roslyn were able to give me the details of the route as we did it back in the day.

Nick and I had planned to start and finish the ride in Wangaratta, as per the original route, but with all accommodation in town booked out for the Wangaratta Jazz Festival, we ended up having to stay in Beechworth. It wasn’t ideal but we’d still get to ride the route in its entirety, in the same direction — it just meant that the last section of the ride would be the hardest.

That 25km section from Eldorado to Beechworth, which we’d do on the Tuesday at Bike Camp, was mostly unsealed and ended with a steep climb before the descent into town. The Beechworth Hill was feared by students of all year levels and was where the camp’s KOM and QOM were decided. In our return visit, Nick and I would have the Beechworth Hill to contend with at the very end of the ride, after roughly 160km.

So on a Saturday morning in late October, Nick and I drove the three hours from Melbourne up to Beechworth, kitted up and hit the road. With 165km ahead of us the pace was pretty sedate as we headed towards Yackandandah, both of us keen to conserve our energy and take in our surroundings. Thankfully the weather was perfect — around 25ºC with blue skies and barely a breath of wind.

Every town we rode through brought back its own memories. In the tiny town of Wooragee, the muffled sound of a primary school talent show came flooding back, a cover of Green Day’s “When I Come Around” still fresh in my mind. In Yackandandah, it was the vision of an army vehicle pulling out recklessly in front of our group as we hurtled down the fast descent into town. Or the Bee Sting pastries at the local bakery, always so popular among students (and still on sale today).

On Back Creek Rd, I recalled our friend Rohan crashing on a then-gravel descent. In Bruarong, it was the memory of fly-plagued lunches in the shade as we tried to escape the scorching midday heat. Around seemingly every corner came a cue to discuss another memory; another story that began with “I remember …”

The kilometres passed by quickly, left behind by hours of engaging conversation. In Myrtleford, after 60km, we stopped briefly for lunch then got back on the move, chipping away at the long flat roads ahead of us. Despite the gentle pace, the fatigue was starting to build, for me at least. But still we carried on, heading towards Wangaratta with a brief stop at the cheese factory in Milawa.

In Wangaratta, with 110km on the clock, the fatigue seemed to subside and the final 50km seemed an easy prospect. A bit of wind made the going slow as we headed north from Tarrawingee then east to Eldorado, stopping briefly to inspect the caravan park we’d call home every Monday night on Bike Camp.

From there it was just 25km to Beechworth, but with a sizeable gravel sector and a tough climb still ahead of us.

The unsealed road out of Eldorado was in better condition than I remembered it to be. Which was just as well given we were on road bikes rather than the mountain bikes we’d taken to Bike Camp back in the day. But even without the harsh corrugations that defined Tuesday mornings back in Bike Camp, I couldn’t avoid two pinch flats, both within five minutes of each other.

It was the only frustrating period in a superlative day on the bike. After a clean run and having made good time, it was frustrating to be brought to a halt, twice. And given I was out of spare tubes, it was with great trepidation that I continued after fixing flat #2, praying to the cycling gods for better fortune for the remaining unsealed kilometres.

The river crossings I remembered so vividly bore a surprising amount of water, a good omen ahead of our final rest stop of the day: Woolshed Falls.

Tuesday lunches at Bike Camp were always a treat. A stop at Woolshed Falls meant a welcome swim at the top of the waterfall, a great way to cool down and escape the summer heat. Sitting at the falls, more than a decade on, resting our legs after 155km, was one of the highlights of an already magnificent day. Our feet dangling in the water, we listened to the sound of the falls, remembering the times we spent there as teenagers.

Those Bike Camp visits to Woolshed Falls, while always enjoyable, also came with their own sense of dread. They meant that all that remained between us and our campsite for the night was the infamous Beechworth Hill.

On paper it’s not a long climb — a touch over 2km — but at 7 or 8%, it was more than challenging enough for us school kids. I won the KOM once, in year 8, and got close on a couple other occasions. And as hard as it was, I always relished the challenge to push myself when the road tilted up. I guess it’s little surprise I went on to start a website about cycling uphill …

With daylight fading, Nick and I battled our way up the Beechworth Hill, suddenly feeling the fatigue that had been absent from our legs for much of the day. But before too long we crested the climb and flew into Beechworth, completing a truly memorable day on the bike.

I’ve done many bike rides in my time, the majority of them enjoyable. But only a handful stand out in my mind as truly memorable. Both bikepacking trips with Nick are on that list, as too is my first successful attempt at the 3 Peaks Challenge (now Peaks Challenge Falls Creek). Several of the Domestique 7 Peaks rides also spring to mind — a thoroughly sodden day at Mt. Buller, for instance — as does a ride with pro cyclists in Italy.

This ride with Nick slots right in near the top of that list. It delivered everything you could want in a bike ride: great legs, excellent company, perfect weather, terrific roads and, crucially, a journey with real meaning attached to it.

It was everything I was hoping for when we planned out the ride. It was a chance to get away for a nice long ride, the opportunity to relive one of the fondest periods of my childhood (particularly with my 30th birthday just around the corner), and the chance to spend quality time with a dear friend before he becomes a father for the first time next month.

I’d like to say a big thank you to David Leigh and Roslyn Green for their lovely emails and valuable advice during the planning phase (and for sharing the truly humbling news that there’s a Box Hill High School Bike Camp award named in my honour, more than a decade after I left the school). Thanks too to all my fellow Box Hill High School Bike Campers for the great times and for helping to create such precious memories.

And finally, I’d like to say a huge thank you to Nick for joining me on one of the most satisfying and memorable rides I’ve ever done. To have his companionship on that day, and to still be able to call him my closest mate after so many years, is something I’m incredibly proud of.

Here’s a video I put together that documents the ride Nick and I did:

Here’s a selection of photos from the 2004 Bike Camp and from Nick’s and my nostalgia ride:

12 Replies to “A ride down memory lane: Bike Camp revisited”