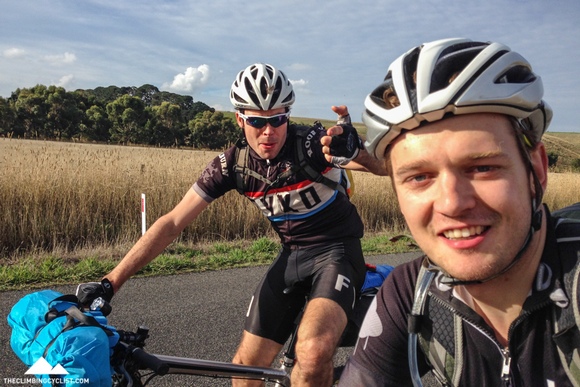 Back when I was in high school my best mate Nick and I had this ambitious plan of riding from Melbourne to Sydney, carrying everything we needed with us on our bikes and camping as we went.

Ten years on we still haven’t done that ride together — although Nick did ride to Sydney solo last year — but over the Easter break we did manage a ride that will stick with me for a long time.

Nick had the idea of riding down to the town of Forrest in Victoria’s south west — home to some of the state’s best mountain bike trails — spending some time there, then riding home. We planned out a loose four-day route (which we would adjust as we went) and I went out and bought and borrowed enough gear to get me through the trip.

We set off on Wednesday morning, Nick and I catching local trains into Southern Cross Station where we met up and boarded a V/Line train for Geelong. The trip was surprisingly painless — we simply used our Myki cards to pay for the fare and our bikes were stowed safely in an oversized luggage area in one of the passenger carriages.

We disembarked at Marshall station on the southern outskirts of Geelong and after grabbing something to eat at a local bakery we hit the road.

It sounds obvious but the first thing we noticed when rolling out of Geelong was just how heavy the bikes were. I was on my brother Brendan’s old mountain bike which, when fully loaded up with gear, weighed roughly 22kg. Nick’s rig was roughly the same weight and as we started cutting south and west towards Forrest, 20-25km/h was about as fast as we could manage without making things uncomfortable. That opening stretch would turn out to be the fastest section of the day.

The course we’d plotted took us away from the main roads in favour of smaller, quieter roads. We had to cover roughly 15km before we’d cleared the outer fringes of Geelong and hit our first unsealed road of the trip. And with that the adventure had begun.

Most of the unsealed roads we rode were hardpacked with a hint of surface gravel — fine for moving along at a reasonable speed. But occasionally we’d hit a section of rough corrugations, the pace would drop and it felt like all the gear was about to rattle off our bikes.

About 35km into the day we turned right and headed west-ish along Tanners Road. A few kilometres down the way we spotted a sign pointing in the direction we were headed and bearing the words “Public access not advised”. We considered briefly whether we should turn around and head back to the main road we’d turned off, but decided to press on down the fire road instead.

The road turned out to be fine and in no time at all we were heading south on Hammonds Road and then west on Aireys Inley-Bambra Road. This stretch would prove to be the one of the hardest sections of riding for the entire trip. We climbed for around 6km, all on a rough and rocky road that made 8km/h seem like an impossibly fast speed.

When your bike is the wrong side of 20kg you’ve essentially got no choice but to stay in the saddle. Standing up and torquing the bike was hard work (due to the weight we had attached to the handlebars) and we were far better off sitting down and using the gears at our disposal.

The tough climbing, combined with the fact we hadn’t really stopped for food or drink since the start of the ride 58km earlier, meant we were very much looking forward to reaching the town of Bambra, roughly 6km up the road.

We reached the top of the climb, pulled over to the side of the road as a giant logging truck caught us from behind, then descended towards Bambra. But when we got there it was to find little more than a school and a couple of houses. By this stage we were getting pretty hungry and thirsty but luckily the bigger town of Deans Marsh was just 7km down the road.

Reaching Deans Marsh was a great relief. We’d been riding for the best part of four hours and we were ready for a rest. We stopped at the general store there, bought and inhaled a bunch of junk food and took a moment to soak it all in. Our only responsibilities for four days were riding our bikes, eating food and sleeping. Does it get much better than that?!

Eventually we got up, filled up with water and began the final 30km or so to Forrest. Compared to the tough climb we’d ridden earlier those last 30km were reasonably flat — and almost entirely sealed — but there were still a few rolling hills to conquer. And when your bike is as heavy as ours were, there’s no such thing as punching up a short rise. Any momentum you might have is quickly lost as the road ramps up — you’re far better off saving your legs, waiting for the gradient to kick in, then spinning your way up.

We rolled into Forrest a little before 5pm, tired, but probably not as tired as I would have expected. We’d ridden 99.7km, much of it on unsealed roads, and all with far more gear than we roadies were used to carrying. It was certainly satisfying to have a beer at the Wonky Donkey and reminisce about the day we’d had and consider the days to come.

You can check out my Strava file from Day 1 here.

On Thursday morning, after a great camp breakfast of porridge with sultanas and cinnamon, Nick and I got on our bikes and headed off to begin a day of mountain biking.

The trails at Forrest are split into two sections: north of town and south of town. We headed south to begin with and got warmed up on trail #4, one of the easier sections in the area. It always takes me a little while to get the feel of riding the trails and Thursday was no different, particularly given how light the bikes were compared to the previous day.

It didn’t take too long before we were both finding a rhythm and so we decided to try out trails #5 and #6 which were rated as “more difficult”. They certainly were more difficult than #4 — steep climbs, tight corners, plenty of technical sections, and a couple of muddy switchback sections where you descend very quickly towards a creek.

But despite the challenge (or perhaps because of it), we had a great morning. The fact that the trails were more or less deserted (being a Thursday morning) and the stunning scenery really added to the experience.

After taking on trails #4, #5 and #6 we headed south east out of town and up towards Lake Elizabeth, ‘up’ being the operative word. I found myself struggling on the at-times steep ascent and it was with some relief that we reached the top and bombed back down trail #3 to a welcome lunch and cold beverage at the Forrest Brewery.

Lunch was followed by a return to camp for a brief arvo nap, before we headed north to check out the other section of trails. After a challenging climb from the main road just to get to the trailhead, we descended trail #11 which was fast and flowing in parts but technical and tough going in others.

I seem to remember a lot of logs lying across this particular path. Some of them I was able to bunny hop, others I was too scared to … and one I tried to but shouldn’t have.

The log was at the top of a short but steep incline and I tried to gather some speed and hop over the log. I got the front wheel over fine, but the back wheel wasn’t so cooperative. I tried to unclip from the pedals as I ground to a halt but it was too late. I fell to my left … and landed squarely on the rib(s) that I injured at Mt. Buller a month or so ago.

My first thought (apart from “yep, that hurt”) was one of frustration — I really couldn’t be bothered dealing with the pain and inconvenience of a (suspected) broken rib again. Thankfully the pain was only mild as I picked myself up sheepishly and continued on (gotta love adrenaline) but experience told me it would get worse later on.

At the end of trail #11 we crossed paths with a dog that seemed to be running freely along the trails. His name tag suggested his name was Hank (his owner would later say it was actually “Hock” or “Honk”, we couldn’t quite work out what she was saying) and so we said hello and gave him a pat before heading on our way. Of course he (let’s call him Hank) followed us.

For the next hour or so Hank would run along the trails with us, sometimes ahead, sometimes behind, sometimes in between us. More than a few times he’d suddenly dart off into the bush before re-emerging from his shortcut several minutes later. 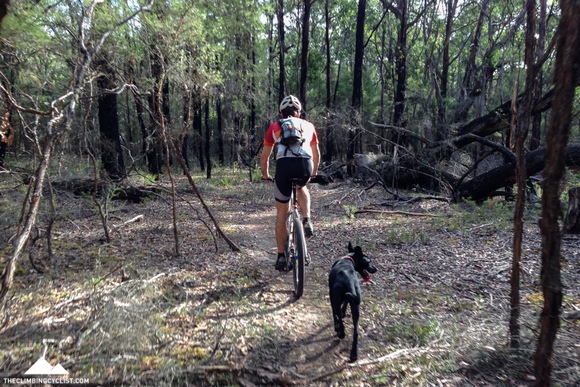 After following the thankfully easy trail #7 for a while we linked back up with the trailhead and made our way down trail #10. I don’t know if I was just getting tired and sore or if this trail was harder than those that had come before, but I wasn’t riding as smoothly or as confidently as I had before.

We took a wrong turn somewhere down trail #10 and ended up back on #7 and with daylight starting to fade, we decided to take a shortcut down Cemetery Road rather than trying to get back on #10 before taking a circuitous route back to town.

As we descended Cemetery Road back to the main road, then made our way up the roadside trail back into Forrest, Hank sprinted after us. He couldn’t keep up when the road tilted down, but he never gave up and sure enough, he followed us all the way back to Forrest.

We ended the day with a great pub dinner at the Wonky Donkey where we were joined by a handful of Nick’s work colleagues who were down for a day or two of mountain biking as well. And after a long but enjoyable day it was time to turn in. The following day we’d be back on the road.

15 Replies to “Bikepacking the Otways: part one”