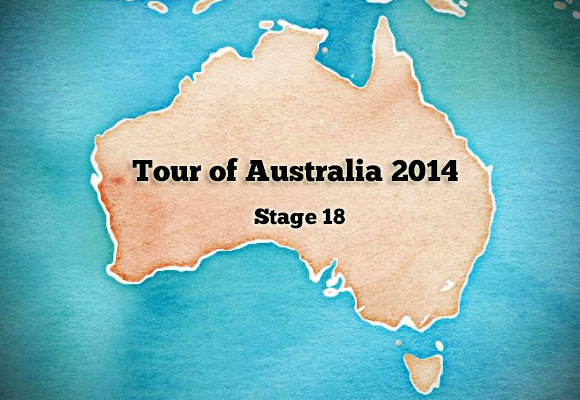 Inspired by the Giro d’Italia, the Tour de France and the Vuelta a Espana, the Tour of Australia is a fictional three-week Grand Tour route created by David Blom and Matt de Neef to showcase some of Australia’s best cycling roads. This is the second year of the race and today we reveal stage 18 of the 2014 edition.

Click here to see the route and profile at Ride with GPS.
After arriving in Launceston at the end of stage 17, the riders leave town the next morning, heading for the east coast of Tasmania.

There are a total of six categorised climbs on the day (none of them long or steep) and the first of those begins inside the first 5km of the stage. Climbing from the outskirts of Launceston for 7.1km (at an average of 3.5%) this fourth category climb takes the riders north east up the Tasman Highway.

The second climb begins roughly 25km up the road, and ascends for 2.7km at 6%, another fourth category climb. From the top of this second climb after 39km the riders stay on a plateau for roughly 5km before descending towards Scottsdale where the first intermediate sprint is contested after 62km.

Following the Tasman Highway on its windy journey to the coast, the riders hit the top of another fourth category climb (1.9km at 7.2%) after 73km. There’s a brief descent as the road bends south before the fourth climb of the day begins. This fourth category ascent tops out after 77.2km following 2.7km of climbing at 6.7%.

The Tasman Highway continues to take the riders north east, passing through Branxholm and Derby before turning south after 105km. It’s at this point that the day’s fifth categorised climb begins. It’s a 6km-long third category ascent at 4.1%. After 7km or so of flatter roads the riders reach the final categorised climb of the day: another third category ascent of 5km at 4.9%.

From the top of this last climb to the town of St. Helens after 160km it’s mostly downhill and flat, with one shortish rise thrown in. The second and final intermediate sprint comes in St. Helen before, at the 170km mark, the riders reach Tasmania’s east coast. From here to the stage finish in Bicheno it’s a largely flat 65km, all along the Tasman Highway.

As with the previous day’s racing, stage 18 is one that should favour the sprinters that have a bit of climbing ability. While there are six classified climbs to contend with in the first half of the race, none of them are particularly long and certainly not as steep as the two sharp climbs on stage 17. Consider also the fact that the last 100km are very flat compared to the first 100km and you’re looking at a stage that should be suited to the fast men.

That’s not to say that a group of riders won’t get up the road early in the day — one almost certainly will, with KOM classification contenders possibly represented. But once the day’s climbs are out of the way the teams of the sprinters that are still left in the race will come to the fore and start to close things down.

For the general classification riders this is another day to stay quiet in the bunch, to let the sprinters and opportunists do their thing. But with only three stages left in the race, the fans won’t have to wait long to see the big names battling it out for overall honours again.