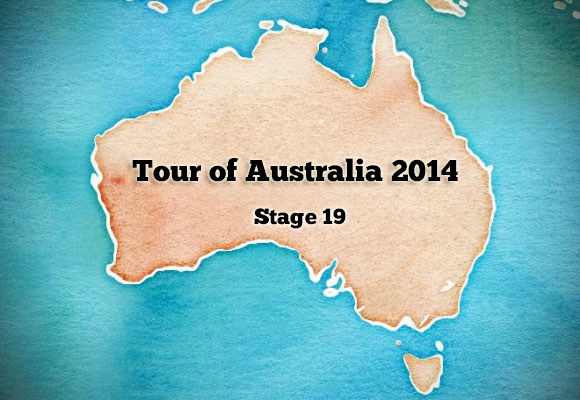 Inspired by the Giro d’Italia, the Tour de France and the Vuelta a Espana, the Tour of Australia is a fictional three-week Grand Tour route created by David Blom and Matt de Neef to showcase some of Australia’s best cycling roads. This is the second year of the race and today we reveal stage 19 of the 2014 edition.

Compared with the previous two days of racing, stage 19 of the 2014 Tour of Australia doesn’t feature all that many climbs. But the ones it does feature are sure to have an impact.

After transferring to the small town of Fingal for the start, the riders head west out of town and into the first climb of the day after just 12km. This first climb might only be 2.6km long, but with an average gradient of 11% it’s likely to form a selection very early in the day.

Following Rossarden Road from the top of that first climb it’s largely flat before the start of the second climb after roughly 27km. This 3.2km climb will appear easy when put next to the first climb of the day, with an average grade of 6.6%. From the top of that second climb it’s roughly 10km downhill to the outskirts of Avoca where the day’s first intermediate sprint will be contested, some 46km into the stage.

At Avoca the riders head west along the Esk Highway with virtually no climbing to speak of for the next 25km. And when the riders head north on Glen Esk Road and Kingston Road, the flat parcours continues. It’s not until after the second intermediate sprint in Evandale after 115km that the road starts to rise again. Even then it’s a gradual rise over 5km or so as the race heads east towards the Ben Lomond National Park.

At the 150km mark the riders turn south of Blessington Road and on to Ben Lomond Road. And so begins the final, 18km climb to the top of the Ben Lomond plateau. The climb has an average grade of just under 6% but this is made considerably more difficult by the fact that it is unsealed the entire way.

In addition to battling the possibility of punctures on the rough (but ridable) surface, the riders in the Tour of Australia have to contend with three steep ramps in those final 18km. The last of those is the famous Jacobs Ladder segment, as featured in this memorable Rapha video from a few years ago. This includes a 1.2km stretch with an average gradient of 13%, which falls within the last 5km of the climb.

Having such a steep climb so close to the start could have a number of effects. It could split the field right away, whittling the peloton down to a much more select group. It could effectively be neutralised by the peloton with the big names happy to save their legs for the final climb. Or it could provide a perfect launching pad for a breakaway to get clear and start building an advantage.

The likeliest scenario is probably a combination of all three. A break will get clear, the weaker climbers will get shelled, and the GC riders will stay calm and just tap it out in the thinning bunch.

With only two stages after this (and really just one when you’re talking about the GC), expect the overall contenders to light things up on the final climb. Depending on who gets in the breakaway the GC contenders might be happy to let the escapees fight it out for the win … assuming they made it to the bottom of the final climb with an advantage. There’s an awful lot of flatish road on the lead-in that suits a speeding peloton.

But regardless of the situation up the road, the overall contenders will be desperate to get whatever time they can on the tough final ascent. The unsealed road adds another element to the contest — a rider might well have been dominating the Tour until this point, but if they puncture on the final climb their race could be over.

The steep ramp of Jacobs Ladder could well prove to be a launching pad for an attack from a potential stage winner. The gradient eases slightly after that section and assuming a rider can break their opponents at that point, they might be able to ride away for the win. Either way, the helicopter shots would be simply stunning.