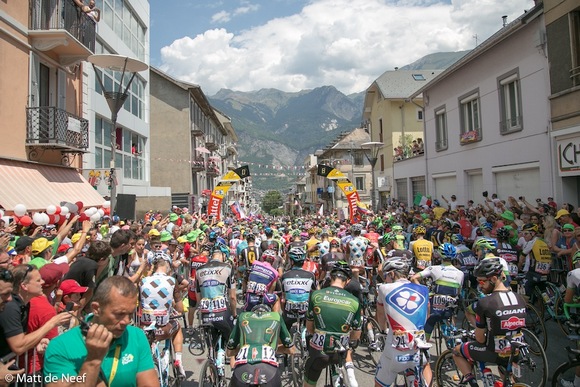 You might have noticed that it’s been pretty quiet here at The Climbing Cyclist in recent weeks. That’s partially because I haven’t been riding much lately, but mainly because I’ve spent the past month and a bit in Europe without a bike, most of it covering the Tour de France for CyclingTips.

I try to avoid writing about my ‘day job’ here whenever I can because most people come to this site to read about riding bikes and, in particular, riding bikes uphill. But in the past few weeks I’ve had a few of you ask me to write something about what it’s like to cover the Tour de France; an insiders perspective if you will.

I certainly don’t claim to be an expert on covering Le Tour — this was only my second time at the race and the first time around, in 2013, I spent more time on the bike than I did in the press centre. That aside, here are some things I’ve learned from seeing the world’s largest annual sporting event up close; some things you mightn’t be able to pick up watching the race on TV.

The race is much, much bigger than the 200 riders you see on TV

There are literally thousands of people working at and on the Tour de France every day. From riders and team staff to the media; from security guards to the local police forces; from truck drivers that move the start/finish line infrastructure around to the logistics staff that keep everything running as it should.

It’s an absolute behemoth and, given how big it is, it’s remarkable how smoothly it all runs.

One way to remind yourself how small and insignificant you are in the scheme of the Tour is to wander around the ‘technical zone’ at the finish line. This is a maze-like area of trucks and campervans, most of which belong to TV networks who are beaming their pictures around the world. It’s a forest of wires and cables and, given it’s set up differently each day, you’re bound to get lost there every now and again.

You’d think that being at the Tour de France would make it easier to see more of the race than on TV, but it’s exactly the opposite. If you want to watch the race you’re better off staying at home. Assuming you go to the start of the stage, you’ll spend several hours (up to five in some cases) driving to the finish, meaning the stage is often in its final kilometres by the time you get there.

This is because the path from the press centre to the press area at the finish is often through the technical zone (see above) and sometimes blocked by unhelpful security staff. Add the fact that there’s often quite a walk (a kilometre or two sometimes) to the finish line and you can see how it’s easy to miss big chunks of the race.

Of course, as a journalist it’s vitally important to be at the race rather than sitting at home watching it on TV, not least for the ‘easy’ access to riders.

You spend most of your day driving

As alluded to above, covering the Tour entails plenty of time in the car and plenty more kilometres than the 3,500 the riders cover in three weeks. With hotels often booked out in the surrounding area, you’ll spend typically 30 mins to an hour driving to the start each day, then the same after the finish.

Add to that the driving you do to get from the start to the finish and you’re looking at some serious hours in the car, most of it on non-descript motorways with often obscene tolls.

And then there are the mountain-top finishes. They might look great on TV and the scenery might be stunning, but it’s not a lot of fun being stuck in a traffic jam for two hours, starting at 8pm, when you haven’t had dinner, worked out where your hotel is or even started your work for the evening.

Most days at the Tour we’d hit the road by 9am (not too bad) but we wouldn’t make it to our accommodation until 9.30pm that night. With a few hours work to finish after that, it would be rare for us to get to bed before midnight.

If you’re not driving during the day you’re working, so you’re often looking at 12-hour days, virtually every day for more than three weeks. No journalist will say that their job at the Tour is harder or more tiring than that of the riders, but it certainly isn’t a walk in the park.

Only fans really get to rest on the rest days

Ok, so the riders mightn’t have to race, but they certainly do get out for a ride plus they have media commitments as well. For journalists, the rest days can be among the busiest on the Tour, flitting between press conferences, trying to catch up on work, and doing basic things like washing that pile of sweat-drenched clothes that has been slowly fermenting in a corner of your suitcase.

For fans though, particularly in Australia, rest days provide a much-needed opportunity to catch up on sleep before the race continues in earnest the following day.

The quiet moments are often the most memorable

Towards the start of this year’s Tour I asked one of the team’s media managers what his favourite Tour de France moment was. After a slight pause he explained that it was the quiet moments away from the race that he cherishes most. It wasn’t until a few weeks later that I really appreciated what he said.

Covering the Tour means more than three weeks of long, hard days, in amongst the hustle and bustle of one of the world’s biggest sporting events. You’re constantly jostling fellow journalists to get access to riders, rushing to get stories done on time, trying to find your way around cities that are all but closed to traffic … It’s a stressful gig. Which is why the quiet moments are so important.

Whether it’s going for a gentle morning stroll through the sleepy farming town you’re staying in, taking a moment to breathe in the fresh air on some Alpine summit, or just sitting down and reading a book somewhere for a few minutes, the quiet moments provide a necessary counterpoint to the daily insanity and, really, a way to get through it all without losing your marbles.

I don’t want to say that the stereotype about the French being rude is true but, well, let’s just say I felt much more welcome in Austria and Germany in the weeks before the Tour. Knowing a bit of French goes a long way, not just at the Tour de France where the race’s security guards seem to throroughly detest English-speakers, but in France in general.

I was lucky to have two travelling companions that both spoke enough French for us to get by just fine but I would love to have been able to speak a little myself.

The Alps are Pyrenees are ridiculously beautiful

This one might be obvious from the images you see on TV but there’s nothing quite like being at the top of some massive peak and taking a moment to drink it all in. I had that opportunity at Mont Ventoux in 2013 and in 2015 there were similarly memorable opportunities. On stage 10 in the Pyrenees for example (where Chris Froome rode away with the Tour), the press centre looked directly out over the road and the views beyond. They are the things you remember.

Even being stuck in traffic jams post-mountain-stage can have its own charm. On stage 19 of this year’s race, on the drive town from the La Toussuire ski resort, we got caught in traffic for the best part of two hours. And yet we had magnificent views over the Alps as we waited for the multitude of vehicles to snake their way off the mountain into the valley below.

Moments like that are a perfect reminder that it’s often worth looking on the bright side of life. After all, how often do you get to sit and watch the sun go down in the French Alps, and get paid for it?

When you’re driving through the Alps and Pyrenees and marvelling at the views, or even dropping into Italy for lunch, it’s hard not to feel like you’re on holidays to some extent. But such thoughts quickly dissipate when you realise you still haven’t finished your work from yesterday, your work for today is piling up, and that today’s stage hasn’t even finished yet.

When you’re driving nearly 4,000km in three weeks and visiting dozens of cities and towns along the way, there’s plenty to take in. Plenty of amazing buildings and landscapes, plenty of great (and not so great) food, amazing cultural experiences and fascinating people. And yet you only really get to experience it on a surface level.

It’s only been a week since I got back and already I’ve forgotten all but a few of the towns we went through. I can remember some buildings but couldn’t tell you which cities they were in, more less point them out on a map.

This sort-of cultural skim-reading is both a crying shame and a great opportunity. On one hand it would be fantastic to actually get to see the many places we pass through. On the other hand, I’ve seen enough to know which places I’d like to go back to when I actually am on holidays there. Assuming I can match the memories with the names and locations.

I think I was spoiled by my experience at the 2013 Tour de France. My boss Wade and I were riding ~300km a week in addition to all the work we were doing and while I paid for it later, it was the most amazing time. This time, though, the one ride I did in five weeks was at a bike launch in Austria.

Don’t get me wrong: that was freaking awesome. But to then go to the Tour and drive through the Alps and Pyrenees without a bike, knowing how good the riding was? Yeah, tough.

Towards the end of the trip we stayed halfway up the switchback heaven that is the Col de la Madeleine climb. Driving up and down that a couple times was hard to bear, particularly when I learned on the last day that there was a bike hire shop just down the road from where we were staying.

Covering the Tour de France is a dream job

There’s no doubt covering the Tour is far less glamorous than people often realise, for the reasons I’ve outlined above. But as a cycling fan, getting to follow the world’s biggest bike race around for three weeks, getting to interact with the riders, and getting to see France — it’s a pretty amazing gig.

I’m very fortunate and very grateful to have a job that affords me these opportunities. I certainly hope I’ll be able to return to the Tour again in the years to come.

Now that the Tour de France is out of the way and I’ve got some semblance of normality back in my life, I’ll continue posting here every week as I have done in the past. I’ve got a couple of rides coming up that I’m really looking forward to, not least of all DD15: the 2015 Melbourne Dirty Dozen, the details of which we’re hoping to announce this week.

Until then, thanks for reading, enjoy the photos below, and I hope you got some value out of the post above. Ride safe!

For more of my photos from the 2015 Tour de France, check out my album on Flickr.