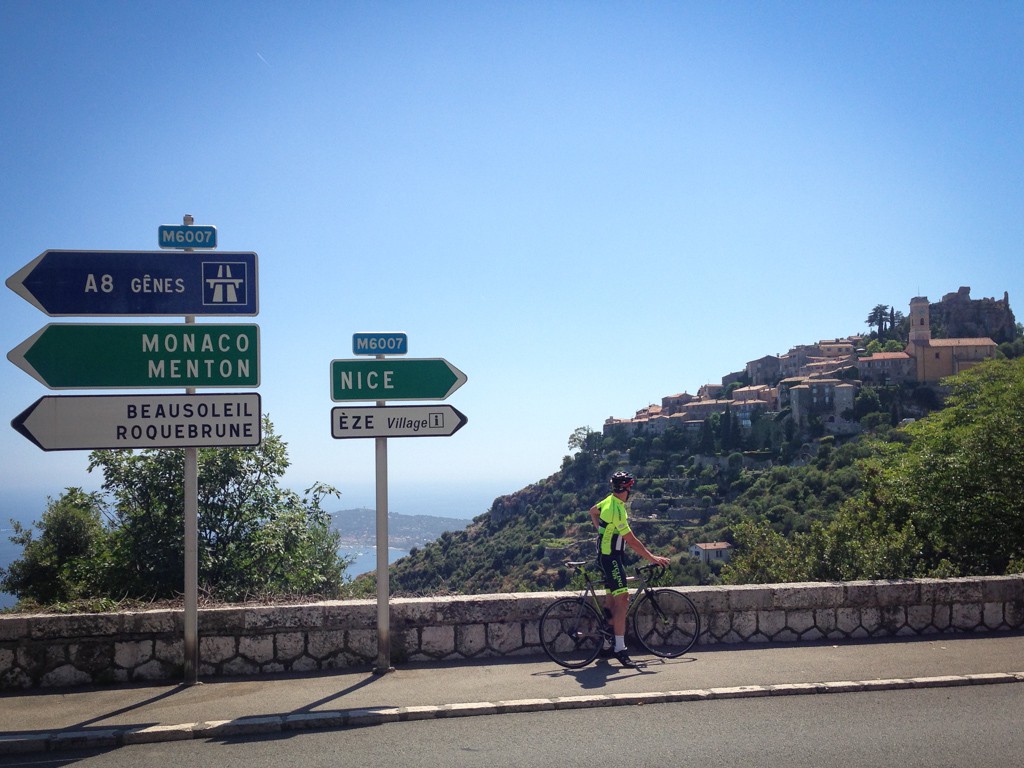 After spending a couple of days riding in and around Varese (northern Italy) CyclingTips publisher Wade Wallace and I took the train south into France and spent a few days in Nice. I knew Nice was supposed to be, well, nice, but it wasn’t until we got there that I realised just how nice.

Here are some thoughts about and photos from the rides we managed to get in while staying on the Cote d’Azur.

On our first morning in Nice Wade and kitted up and rode east along the coast. The plan was, loosely, to ride to Monaco and from there to Menton and, if we felt like it, up the Col de la Madone climb. We hadn’t printed out a map or uploaded a file to our Garmins; it was simply a case of follow the coastline until we got to where we wanted to be.

Straight out of Nice we came across a steep little climb that looked like it only lasted a few hundred metres. We got out of the saddle and attacked the climb but sure enough it was quite a bit longer than a few hundred metres. Wade pushed on, determined to get to the top of the hill before the bus that was now trailing us slowly behind, while I did my best to hang on to Wade’s wheel.

There was a little bit of traffic around but it didn’t really matter; we’d had a tough day of travel getting to Nice from Varese via train the day before and it was great just getting to spin the legs out. To be able to do so on what must be one of the world’s most picturesque coastlines? A true privilege.

We passed through the bustling principality of Monaco after a very brief stop outside the famous casino before pushing on towards Menton. This little town lies just before the French-Italian border and it also serves as the launching pad for one of southern France’s most mythical climbs: the Col de la Madone. Wade and I wrote a piece about the climb for CyclingTips which you can read here if you’re interested.

A few kilometres into the ~13km climb I started to get hungry. And then I got hungrier. And then I got so hungry I could feel my hands shaking and my belly churning like I was going to throw up. Even though there was nothing in there to throw up. The three small muesli bars I’d brought with me clearly weren’t enough.

Even though I was close to being the hungriest I’ve ever been and every pedal stroke felt extremely laboured, I did my absolute best to look around and enjoy the climb. It’s not often you get to ride a climb like the Madone and I didn’t want my memory of it to be tarnished by a fog of all-encapsulating hunger.

Wade stayed with me until a few kilometres to go which was very generous of him given how slow I was going. And then we regrouped at the top before bombing down towards Peille. I figured that given it was downhill for a bit I might as well keep going before getting something to eat. But then the road flattened off and the hunger flat returned.

After 60km we reached the town of La Turbie which is perched on the cliffs above Monaco. We rolled into a delicatessan/cafe/shop of some kind and bought as much food as we could carry. We rolled over to a park and looked out over Monaco and the Mediterranean as we ate lunch.

I’m trying to remember if a sandwich has ever tasted as good as the one I had that day. There was nothing particularly special about it, but I was so hungry that I couldn’t imagine being any more satisfied than simply having food in my belly and more to come.

As is often the temptation in such cases, I ate too much and almost instantly regretted it as we rolled back towards Nice. But then the great views started up again and I couldn’t have cared less about my bloated and aching belly.

I got a flat tyre somewhere along the descent past Eze and Wade zipped off into the distance, not realising I’d stopped. But I wasn’t worried at all. I knew vaguely which way I needed to go to get back to the hotel and more importantly, I’d stopped in a spot that had probably the best views I’d seen all day. I’d gladly get a flat tyre every ride if it meant I could enjoy views like this. 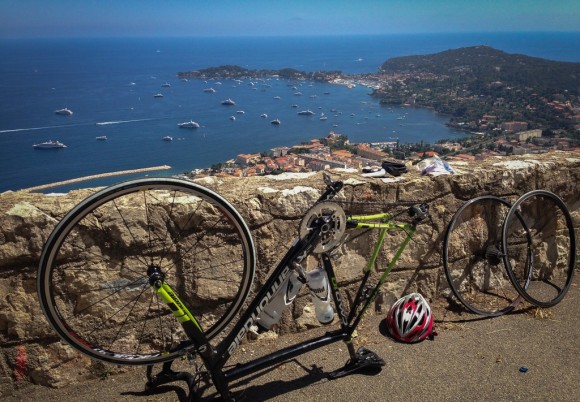 After replacing the tube I continued the descent into Nice and threaded my way through the city back to the hotel where Wade was waiting. It had been another amazing day on the bike and one that I won’t forget in a hurry.

On our second day in Nice Wade and I had planned to ride to Cannes and back, figuring it would be a stunning coastal ride as the previous day’s had been. And while the beach views were quite striking they were nothing compared to the day before. Not only that but the traffic heading west out of Nice was far heavier than it had been in the opposite direction.

After about 13km we decided to pull the pin and head back to the hotel. Despite it being only a short ride it was still good to spin the legs out and see what the Cote d’Azur had to offer in the opposite direction.

As we headed back to the hotel Wade suggested we swap our bikes for runners and go for a jog. We did just that, jogging east along the Promenade des Anglais before running up a bunch of stairs to a series of lookouts about 90m above the city. From there we jogged back into town and back to the hotel, a run of just over 4km done. 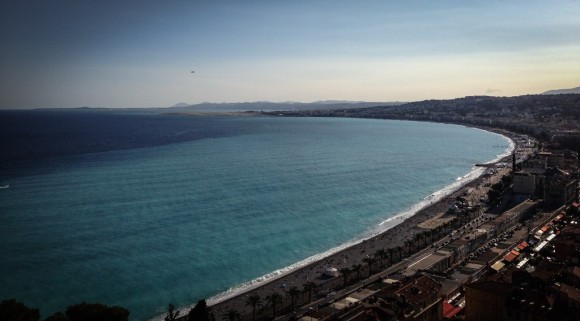 It was good to get out for a run again; only the second or third time since the Melbourne Marathon a couple years ago. I quite like the idea of giving the marathon a shot again at some point. Maybe next year …

Col d’Eze and a chance meeting

On day three of our stay in Nice, Wade headed off alone to meet local residents Tiffany Cromwell (Orica-AIS) and Richie Porte (Sky) for a ride. I figured my chances of keeping up were very slim so I planned something else out instead: a climb up the Col d’Eze.

That particular climb often features in the Paris-Nice stage race and it was Richie Porte who won the time trial up the Col d’Eze this year on his way to winning the race overall. I didn’t give it everything up the climb but I wasn’t stuffing around too much either. I got to the top of the 9.5km climb (at 5%) in about 33 minutes, a mere 14 minutes slower than Richie did it earlier this year. I’m sure I could go under 30 minutes if I pushed hard …

At the top of the climb I bumped into Wade who was riding with Tiff Cromwell at the time. I tagged on the back as the two of them rode towards Italy to meet Richie.

One of the things that’s struck me in riding with Tiff, and with Gracie Elvin and Jess MacLean the week before, is just how well the pros descend. I’ve often thought I’m reasonably competent at picking lines around corners but those girls were a class above. As Wade pointed out, they did have the advantage of knowing the roads, but I was still extremely impressed and inspired.

I rode with Wade and Tiff for probably 10km before I had to turn back, to pack up my gear and check out of the hotel. When Wade returned hours later he did so with great stories about how amazing the ride was (he’d ridden with Geraint Thomas and Vasil Kiryienka as well).

I was disappointed to have missed out and more than a little jealous, but given Wade (a former US domestic pro) was struggling to hold on in the hills, I probably would have missed out even if I’d been there!

Still, I got in a 60km ride of my own with two great climbs and more stunning views of the Cote d’Azur. What an amazing place to be a cyclist!

Return to the Madone

On our final full day on the Cote d’Azur Wade and I revisited the Col de la Madone, not with the aim of setting a new record, but with the aim of getting some photos that capture the beauty of the road. I reckon we did that with our post for CyclingTips.

It was a very cruisy ride up, with several sections re-ridden to get the right photo, but I could hardly complain: I was getting to ride up the Col de la Madone for work. It doesn’t get much better than that. Plus, I was feeling much better than I had earlier in the week and I wasn’t slogging away at 10km/h trying to find some energy from somewhere, anywhere.

It was only a short ride but it was great just getting to visit the Madone for a second time. When the Tour de France returns to Nice for stage 4 I’ll have to see if I can sneak away and get in a PB attempt up there …

I can see why so many cyclists call the Cote d’Azur home. And I’m not just talking about the stunning views. There are so many amazing little climbs all over the place, and so many interesting roads that just make you want to explore. It seems to be perfect territory for Forest Gump riding — just setting out and seeing where you end up. Hopefully one day I’ll be back and with a chance to do some more riding.

I’m writing this from a hotel room in the small town of Ile Rousse in northern Corsica. The first stage of the Tour de France starts today and to say I’m excited would be an understatement. I’m just hoping I can fit some riding in as well!

Until next time, thanks for reading, and enjoy the Tour de France!

11 Replies to “Cycling the Cote d'Azur (Monaco, the Madone and more)”