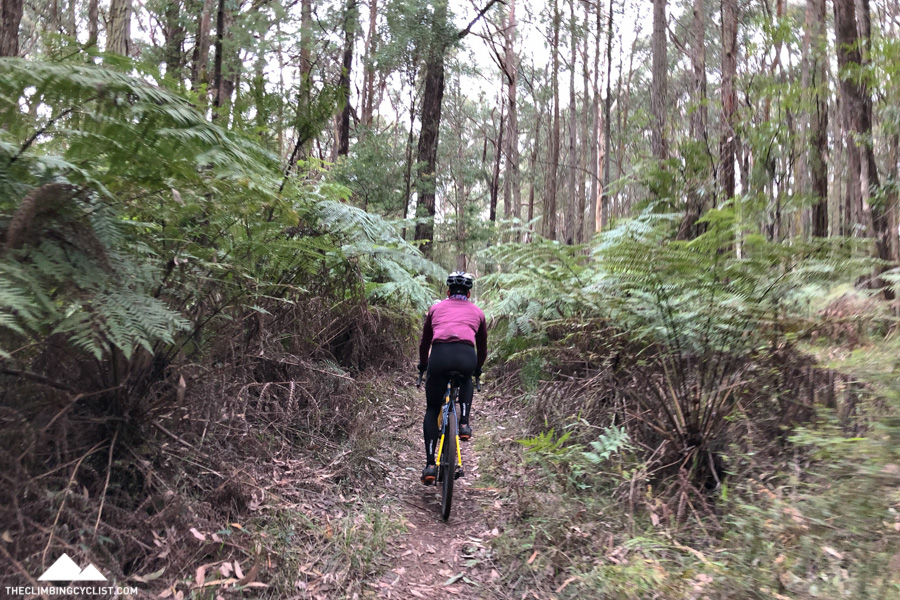 I close my eyes. Sleep doesn’t come for me right away. Not this time.

If I were asleep I’d call them dreams. If I were awake they’d be daydreams. These are neither. They live in that fleeting moment before you plunge into the dark, restorative depths of sleep. ‘Verge visions’, I like to call them.

In this particular vision I see a stupidly steep dirt climb in front of me. I see bark and thin branches and small rocks. My heart sinks as my eyes follow the narrow track up the hill. Another painful pinch.

The riders ahead of me turn away, silently, heads bowed. They opt for the flatter, more sensible route. Normally I’d go for the climb, but not this time. I am spent.

It’s a few hours after finishing the 2018 Ol’ Dirty and this ride has left a mark on me. And not just because of its difficulty.

I can’t, as it turns out. Not for a lack of trying, mind. It’s just that the carpark is full. I retreat, three-point-turning my way back out of the reserve to find a park on the roadside.

As I get my bike off the roof of the car, I start imagining a local resident walking their dog down to the park on this fine Sunday morning. I imagine that, as they enter that park in Mt. Evelyn, they see a couple of army personnel yelling a stream of profanities at people in cars. What would they make of this unusual scene?

For all of us there for the eighth edition of Hells 500’s Ol’ Dirty, however, this bizarre start isn’t entirely unexpected.

The event’s boot camp theme was evident from the earliest promotions. Once signed up, subsequent correspondence hinted at the theme, with military jargon employed to help build the narrative.

Event HQ had been decked out to suitably reflect the theme. Dozens of metres of camouflage bunting adorned the walls, volunteers came around applying camo face paint and buzz cuts were available for all. A military-style jeep was a nice touch, as was the supply drop crates filled with mid-ride snacks and the dog tags handed out to every rider.

There was an undeniable buzz as the start approached, with riders mingling, talking excitedly about the day ahead, and being harassed hilarious by the military personnel. I’m not sure if it was the slightly more enclosed Event HQ than in years gone by or higher participation numbers (or both) but it felt like the biggest Ol’ Dirty to date.

Seeing the MPs goad the hundreds-strong crowd into a round of star jumps and a run through an obstacle course, all while enveloped in orange flare smoke, was the most bizarre thing I’ve seen at the start of a bike ride.

It was an amazing day already and the ride hadn’t even started.

The pre-ride literature recommended leaving the road bike at home and instead bringing a CX bike or MTB — a first for Ol’ Dirty. It’s always been a ride that’s pushed bikes — usually road bikes — to their limits, if not beyond. Running the “CX or MTB” recommendation through the Andy van Bergen Optimism Bias Filter TM, and knowing there was some single-track involved, I pretty quickly arrived at “you’ll really want to bring an MTB.” So I did. And I’m glad I did.

In 2016 I’d been one of only a handful of riders on MTBs, which left me feeling rather like an outsider at the start in Marysville. But the moment we hit the first trails that day, I was glad of my decision. There were more MTBs at the startline last year and again I was glad I’d opted for suspension and thicker tyres. At Sunday’s event, there were even more MTBs again.

Sure, those on CX bikes were quicker on the less technical fire roads and on the climbs, but having an MTB definitely allowed me to make the most of the experience.

There was plenty of banter bouncing around me as I rolled out of the start in a long, slow procession of excited riders. Music blared from portable speakers, many people nervously discussed the ride ahead, and others just set about catching up with ride buddies, old and new.

It was barely a minute later, on a brute of a gravel climb, that the chatter disappeared entirely. As the field split apart on that loose lung-buster of an ascent, the only sounds to be heard were the heavy breathing of several hundred shell-shocked cyclists, the crunching of leaf litter under their wheels, and the jingling of dog tags around their necks.

It was a savage start and one that set the tone for the ride ahead.

As I wound my way through the Dandenongs over the next three-and-a-bit hours, the thought that kept coming to mind was that this was the best Ol’ Dirty course to date. That’s no mean feat — literally every year has offered a beautiful, memorable course, but this was on another level.

For a start, the scenery was spectacular, with lush rainforest interspersed with towering gums, pine forests and the occasional impressive view. It was all there. There were quiet gravel roads, a bevy of testing climbs, technical descents, and plenty of bangin’ single-track.

Oh, the single-track. Fast, flowy, challenging. It was a shame to have to slow down for those pesky CXers at times, meaning I couldn’t enjoy the trails to their full potential. But it did certainly make me want to return, to check out the myriad trails hidden on the north-eastern side of the Dandenong Ranges.

So many of the tracks and trails we covered were ones I’d never come across, despite years of riding and exploring in the Dandenongs. And this was perhaps the greatest beauty of the course. So often we were within a kilometre of roads I’d ridden dozens of times and yet those familiar ribbons of tarmac felt so far away.

Often we’d turn a corner or pop out onto a bigger road and I’d get a flash of recognition. “Ah, so that’s where we are!” I’d think to myself, before plunging back into the forest where, for all I knew, we could have been thousands of kilometres away.

The way Andy was able to string together the course he did, while avoiding major roads, was a remarkable feat of route design. In the past we’ve run rides together where we’ve attempted a similar feat — the Dirty Dandys, or a CyclingTips ‘Sickie Ride’ that it inspired — but the addition of single-track took this course to another level.

I don’t remember every second of the ride, but that’s hardly unusual. But there are moments that flash to mind quite readily. Like the moment we turned onto a stunning trail I’d discovered last year, by accident, while riding with my mate Nick. I had raved to Andy about that section afterwards and was thrilled to see he included it in his course.

Then there were the many moments where we’d round a corner and see another gravel climb pitching up ahead of us at some ungodly angle; the sort of climb that would inspire my verge visions several hours later. Getting to the top each time became a battle of not just physical strength, but determination, tyre traction and weight balance.

I remember a moment early in the ride, on one such rise, when I passed a rider blaring Bonnie Tyler’s “Holding Out for a Hero” from a portable speaker. I’d encounter her twice more in the following hour, once while she had Queen’s “Fat Bottomed Girls” playing, another while AC/DC’s “Long Way to the Top” inspired all within earshot. The title of that last song seemed particularly appropriate.

And then there was a moment at the mid-ride snack stop where I got chatting to Andy briefly. I say “got chatting” but really it was more a case of me standing there, shell-shocked from the exertion, while Andy told me excitedly about the section ahead.

Just 15km remained in the ride, he said, with some amazing single-track amongst it. Less amazing, he warned, was a 50m section of super-steep climbing that he emphatically described as “a bastard”. Even now, several days later, I’m not sure which of the three super-steep sections in that last 15km he was referring to. All seemed like bastards to me.

Other moments also spring to mind. Like one particularly steep descent on moist clay. I followed two CX riders down that drop and watched as both lost their back wheel while trying to make a turn. As they tumbled to the ground, nearly piling on top of one another, I grabbed a fistful of brake to avoid joining them.

And then there were two sections of single-track where I stopped and waited for a crowd to pass, giving myself an unrestricted run at the trail. Both descents were glorious and again reminded me of the need to return in a smaller group or on my own.

But perhaps the most significant moment wasn’t one moment at all, but rather a series of moments. A collection of conversations throughout the day; some short, some longer, others taking place in multiple instalments over the course of several hours.

I bumped into so many people I knew from my years of cycling, and every interaction offered a reminder of how wonderfully social a sport it is, and how great our community is. To be able to ride alongside my brother Brendan and my friend and colleague Iain at various times only made the day all the more memorable.

There’s a real magic in the way events like Ol’ Dirty bring people together and act as a way for the cycling community to connect and reconnect. Andy and his wife Tammy should be so proud of the community they’ve built and the way they continue to foster it.

I’ve had the privilege of working alongside them both on many cycling events over the past six years and it never ceases to amaze me how hard they work and how passionate they are. Their passion is evident from the outside and so too, to an extent, is their hard work. But it’s only when you peek behind the curtain that you realise how much of themselves they give to put on great cycling events like these.

Quite simply, they’ve built Ol’ Dirty into one of the absolute must-do rides on the Victorian cycling calendar. The grass-roots feel, the creative themes that are wonderfully executed, the courses — it’s all on-point. I have so much respect for what they’re able to concoct each year and as my own event, the Dirty Dozen, gets closer, it’s hard not to be inspired.

So, a big thanks to Andy and Tammy for all that they do, and thanks, as ever, to their amazing on-the-day volunteers. I’m confident in saying this was the best edition of Ol’ Dirty yet and I can’t wait to see what next year brings.

Follow the link to see my Strava file for the 2018 Ol’ Dirty. Follow the links below to see reports from previous editions of Ol’ Dirty (previously known as Donna Done Dirty):