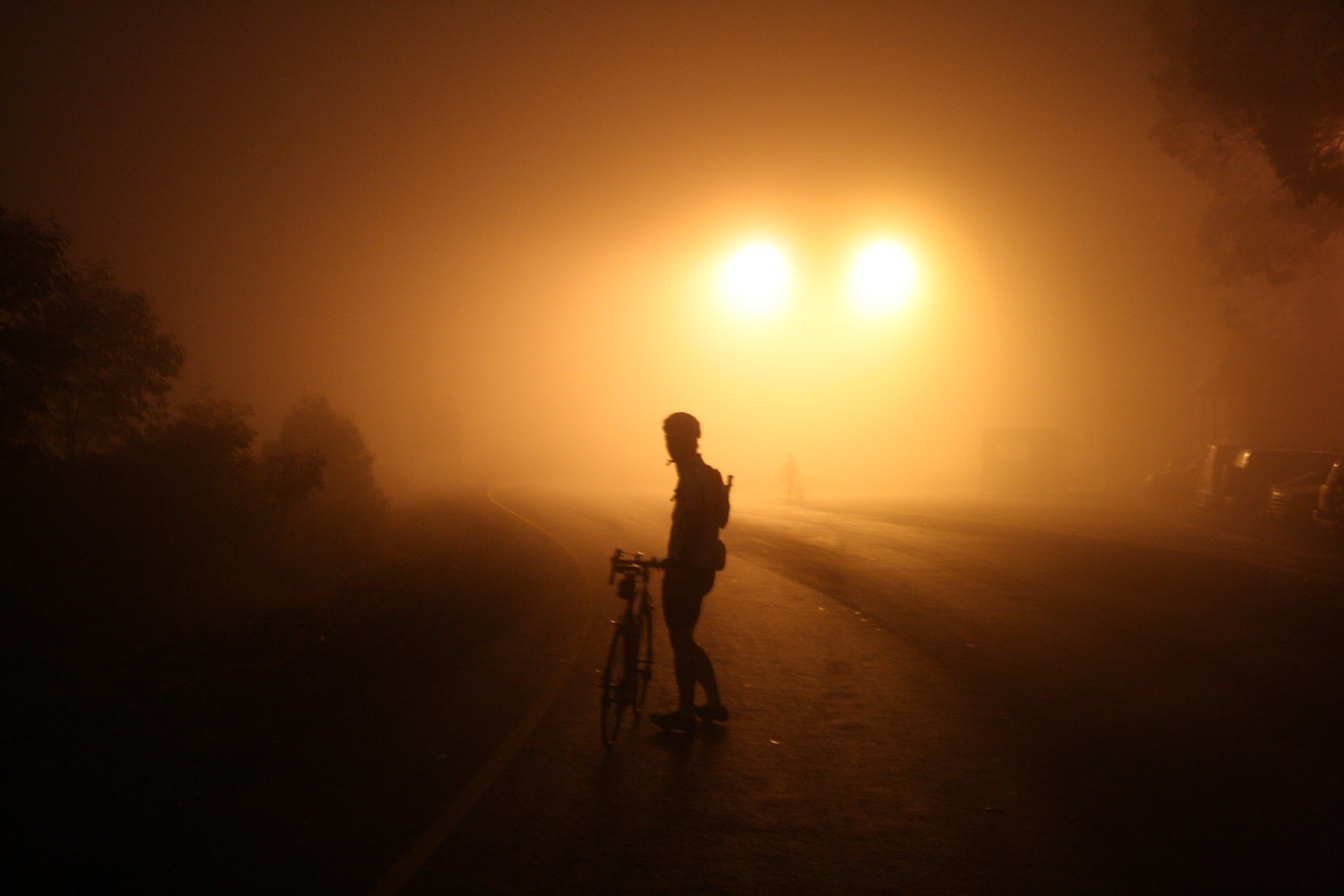 As the 10th edition of Bicycle Network’s Peaks Challenge Falls Creek approaches, I’ve found myself reflecting on my experiences in the early years of the event. The following is a story about my relationship with the ride originally known as the 3 Peaks Challenge; the single toughest but most satisfying one-day ride I’ve done. This article was sponsored by Bicycle Network.

It was the worst day I’ve ever had on a bike. Nearly five hours spent battling incessant rain, the biting cold, and an ever-building sense of failure. For months I’d poured everything into my training, trying to prepare myself physically and mentally for what lay ahead. And then, on the big day, it all came crashing down after just 5km.

My first reaction was one of surprise. I’d tried to change gears and rather than the usual click I was expecting, my bike instead produced a much louder, more troubling sound. The sight of a frayed cable poking out of its housing confirmed my worst fears — I’d snapped my rear derailleur cable in two.

I climbed Tawonga Gap in the 39×12 that day, my slow, low-cadence grind fuelled by a fading sense of hope that I would soon be able to repair the damage. Most of an hour spent at the bike shop in Bright put an end to any hopes of making the day’s time cut.

So on that miserable morning in March 2010, my brother Brendan and I retraced our steps, riding back over Tawonga Gap against the flow of event traffic, back up to our accommodation in Bogong. All the while the rain lashed down, further dampening our clothing and our spirits.

Back at the cabin I recorded a video I still find hard to watch, nearly nine years on (see below). Not just because it’s hard to see anything at 480p potato resolution, but because of the frustration and disappointment that’s so evident in my voice. I remember the feeling all too well. Not just the time, money and effort I’d wasted by not getting a bike service closer to the event, but the crushing feeling of guilt that I felt so keenly.

That was my first experience of the 3 Peaks Challenge, the epic 235km gran fondo now known as Peaks Challenge Falls Creek. Mention that inaugural, 2010 edition to those that took part and you’ll likely receive something like a wince in response. For most riders, it’s a day that dredges up painful, long-suppressed memories.

It wasn’t just the incessant rain that soured the mood. As one commenter wrote on this website after the ride, conditions atop the second peak, Mt. Hotham, were soul-crushingly bad … for those that even managed to get there:

“[On] Hotham and Dinner Plain we were all willing our cables to break, or our wheels to fall off – anything to stop the pain and cold, anything to provide an excuse to jump in a hot spa then crawl back into bed.”

For those that made it to the final climb, the Back of Falls, another torturous challenge awaited. As if the hellish gradients weren’t enough, the surface of the newly sealed Bogong High Plains Rd was filled with sharp slithers of crushed rock that wreaked havoc on the tyres of many.

In some ways, it’s remarkable “Peaks” even continued beyond that first year, such was the carnage of the 2010 edition. And yet come March next year Peaks Challenge Falls Creek will be 10 years old.

I remember clearly how I first heard about 3 Peaks. It was late 2009 and Brendan and I had just completed another edition of Around the Bay in a Day. At a stall in the post-ride event village, Bicycle Network were offering half-price entries to an intriguing new event; an event that pitted riders against three tough climbs in the Victorian Alps.

In the euphoric afterglow of finishing Around the Bay, Brendan and I convinced ourselves that attempting 3 Peaks was a good idea. “We’ve just ridden 210km,” I said, trying to convince myself as much as Brendan, “how hard could another 25km be?” We wouldn’t find out until nearly 17 months later.


The disappointment of 2010 didn’t wear off quickly. In fact, it killed my enjoyment of cycling for many months. But in October 2010, seven months after the failure of that first 3 Peaks, I signed up for another crack. I felt like I had unfinished business to attend to.

I gave myself longer to train for the 2011 edition and vowed to pay better attention to my bike’s mechanical needs. I was going to give it everything I had to make up for the failure of 12 months earlier.

It rained for the 2011 edition as well. But even the persistent rain and low temperatures couldn’t deter me. I had a fire in my belly and it was going to take something drastic to keep me from making my way around the gruelling course and back to Falls Creek.

The early kilometres ticked by easily enough, so too the climb of Mt. Hotham. It was on that fabled peak that visibility dropped to mere metres, making the two descents in the closing kilometres of the climb a test of courage as much as anything. But I was making good progress and feeling positive. Until the Back of Falls.

It was my first time climbing this brute of a hill and it damn nearly killed me. In my retelling of the day I wrote that “I stopped half a dozen times in that first 9km, just long enough to catch my breath, to stop the dizziness from overwhelming me, and to allow my heart to return to something resembling a healthy rhythm.”

But not once did I feel like I wasn’t going to finish. Too much personal pride was at stake. I slogged up the Bogong High Plains Rd with gritted teeth, glad that the surface had improved from 12 months earlier. Later, when I crested the final rise and saw the Falls Creek village before me, it was perhaps the most satisfying moment I’ve ever had on the bike. From my blog post about the day:

“It’s pretty hard to describe the feeling of coming around that last corner, hearing the announcer on the loudspeaker, seeing the ‘Finish’ banner strung across the road and the supporters lining the side of the road. It was such a feeling of relief, of pride in myself for having completing the ride and, I suppose, utter exhaustion. I crossed the line in the pouring rain, dripping wet and starting to shiver from the cold but I didn’t really care.”

After the crushing disappointment of 12 months earlier, I had made amends. It was my greatest physical achievement. My only regret was that Brendan wasn’t there with me. He’d planned to do the ride too but a lack of training opportunities conspired against him. I promised myself that I’d return and make sure that Brendan got to finish this beast of a ride, hopefully assuaging some of my guilt in the process.

Sure enough, later that year, I signed up for my third tilt at 3 Peaks and Brendan for his second. Of my four attempts to date, this would turn out to be the smoothest — the one where the least went wrong and where the ride felt, dare I say it, easiest.

Of course there’s no such thing as easy when you’re dragging yourself 235km through the Victorian Alps, amassing more than 4,000m of climbing in the process. I certainly suffered that day as well — particularly on the Back of Falls — but with mates to ride with, and with Brendan completing the ride for the first time, I couldn’t have been happier.

In many ways, that 2012 edition was the antithesis of the previous year’s ride. Rather than riding solo, I was surrounded by friends and family the entire day. Rather than cold and wet the weather was picture-perfect. And, rather than needing a bunch of time off the bike afterwards, I came away from the 2012 edition feeling motivated to get back in the saddle.

The weather was far less agreeable 12 months later. Where early editions of the ride had been defined by rain and low temperatures, the 2013 edition was very much at the other end of the spectrum. The risk of bushfires plus nearby landslides forced Bicycle Network to alter the route, taking us up Mt. Buffalo before heading up the Rosewhite Gap and finally, painfully, up the front side of Falls Creek.

There was a public outcry over the route change — many complained that the replacement route wasn’t hard enough. Any such fears were unfounded, from my perspective at least. The combination of scorching heat (particularly through Ovens and over the Rosewhite Gap), swollen feet, and a desire to finish the ride inside 10 hours made it one of the most challenging days I’ve ever had on the bike.

I’d climbed from Mt. Beauty to Falls Creek many times before that, and have done so many times since, but no ascent was as hard as that one. Here’s what I wrote about that 30km climb in the days afterwards:

“The excruciating pain in my feet had returned and at times I belted out a scream of pain and frustration. But it wasn’t just my feet; my everything was hurting. My legs, arms, head, stomach … And psychologically, well, I was in a bad place.

“It had stopped being fun long ago, but by this point I was starting to question why I was even doing this ride, why I even ride a bike at all. I resolved to stop riding for at least a month after 3 Peaks, lest I feel the urge to get myself into a situation like this again.”

From the crushing failure of that filthy inaugural edition in 2010, to the redemption of a similarly soggy solo attempt in 2011. From the perfect weather and camaraderie of 2012, to the roasting discomfort of 2013. These are my stories from Peaks Challenge Falls Creek. My memories of an event that helped define my relationship with cycling for nearly half a decade.

If you haven’t tackled Peaks Challenge before and you’re considering it, I’d certainly recommend doing so. No cycling event has made me suffer so much, before offering such thorough satisfaction at the finish line.

Come to think of it, maybe it’s time to make a return; to return to those daunting peaks and challenge myself once more …

This post was made possible with the support of Bicycle Network. Follow the link for more information about the 2019 Peaks Challenge Falls Creek, the event’s 10th edition.