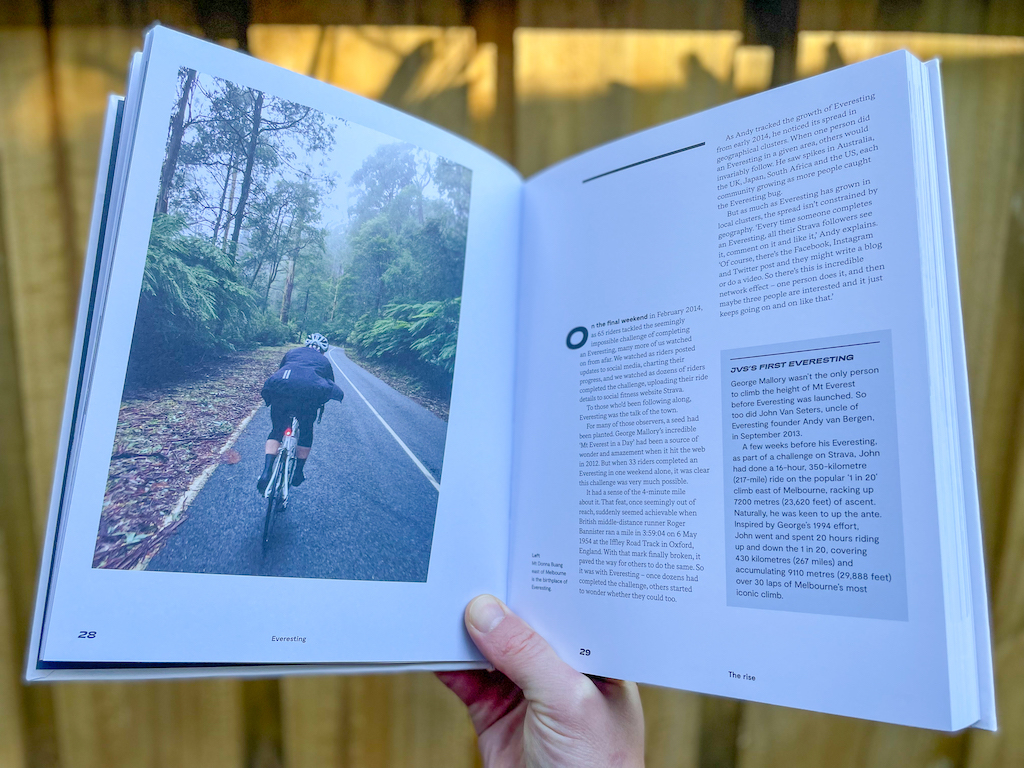 Seven and a half years ago I wrote a blog post about a crazy bike ride my mate Andy van Bergen was organising. He’d organised a bunch of crazy rides in the past, but this was on another level entirely.

Andy had been inspired by an article he read on CyclingTips back in 2012, about Melbourne-based cyclist George Mallory who climbed the height of Mt. Everest by bike, on Mt. Donna Buang near Melbourne. At the time Mallory’s article went up on CyclingTips, his achievement seemed scarcely possible. How could anyone ride the best part of 24 hours on the one climb, over and over, for no real reason?

But in the madness, Andy saw inspiration. And with that, in early 2014, ‘Everesting’ was born.

That first weekend, a few dozen people attempted the challenge, most of them in Victoria. Now, 7.5 years on, Everesting is a global phenomenon. Everesting rides have been completed by well over 10,000 people in roughly 100 countries around the world. They’ve been completed by everyone from Tour de France podium finishers, to rank amateurs; from mountain bikers to runners.

I’ve watched Everesting’s growth with great interest ever since that first weekend, but in the past year or so I’ve been particularly invested in the story. Yep, I’ve written a book about Everesting!

It’s a hardback of 240 pages, full of great Everesting stories and wonderful photos. It documents the rise of Everesting, dissects the physical, psychological and logistical challenges of completing an Everesting, and tells the stories of those who have made the challenge what it is (including those who are pushing the very limits of the challenge).

As part of writing the book, I also attempted an Everesting myself. I documented the months of training, the physical and psychological anguish along the way, and the day itself. I won’t spoil how it went – I’d love for you to read about it in the book!

Everesting is your introduction to the extreme cycling challenge that is taking the world by storm. To complete an ‘Everesting’ is to cycle the height of Mt. Everest (8,848 meters) by ascending and descending a single hill or mountain continuously without breaking to sleep. It’s phenomenally challenging for the rider, both physically and mentally but can be completed almost anywhere. All you need is a bicycle and a hill to climb.

Be inspired and learn how it’s done from those who have attempted it before. Everesting tells the remarkable stories of those that have completed the challenge (from pros to amateurs). What started as a small grassroots challenge, tried by just a handful of hardy recreational riders, has now exploded into a global phenomenon. More than 10,000 Everestings have been completed in nearly 100 countries. Among those to complete Everestings are Tour de France winners and World Champion cyclists, as well as thousands of ordinary men and women. Jens Voigt, 17-time Tour de France competitor, described his Everesting as: ‘One of the toughest things I have done in my life’.

You don’t need to be a cycling fan or even know much about the sport to appreciate the challenge of climbing the equivalent of the world’s highest mountain on your own. The challenge of Everesting is quirky and difficult, and the human stories compelling. Anyone can do it – you can even run or walk it – and more and more are taking up the challenge.

I finished writing the book at the end of February 2021, having started work back on May 1, 2020. The book’s since been edited, and it’s currently with the printers. It will be published in late September by the wonderful folks at Hardie Grant Books.

I’m delighted to be able to share the front cover with you today. Here it is!

While the book is still a couple months away from hitting shelves, you can place a preorder now. If you’ve ever enjoyed any of the cycling stories I’ve written here, or if you’re interested in the story of Everesting, or if you’re just keen to find out why thousands of people have pushed themselves to the limit for a rather arbitrary challenge, I’m confident you’ll enjoy ‘Everesting: The Challenge for Cyclists: Conquer Everest Anywhere in the World’.

I’m really proud of how the book has turned out and I can’t wait for people to read it!

Follow the link to preorder your copy of ‘Everesting: The Challenge for Cyclists: Conquer Everest Anywhere in the World’.

One Reply to “I wrote a book about Everesting!”