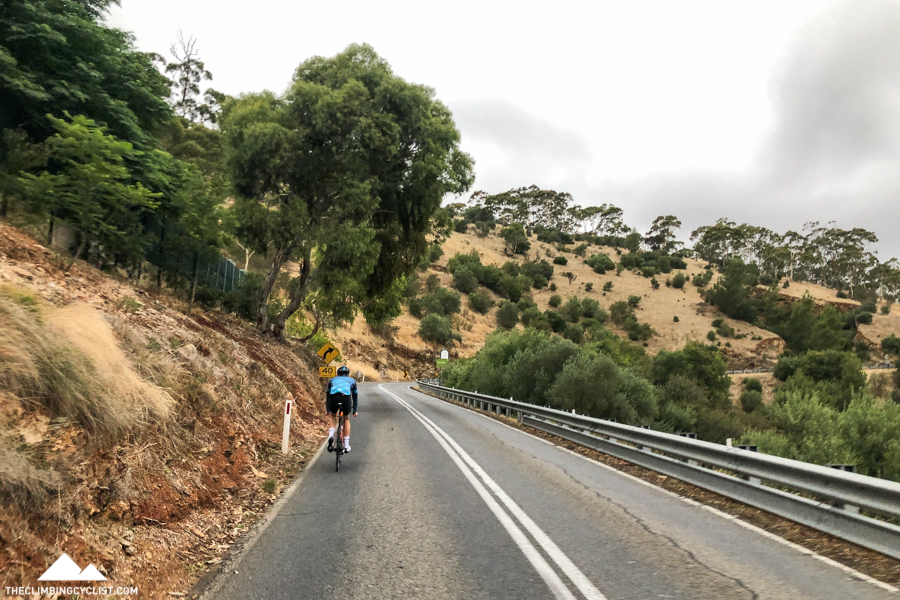 Roughly six months after it began, The PB’s Project is over. Since October 2019 I’ve been out riding some of my favourite hills and mountains, trying to set new PBs. But on April 18, 2020 I made my last PB attempt for the season.

I ended up two climbs short of a perfect record, having failed to set new PBs on both the Nationals KOM and the 1 in 20. So why call it off now, before getting all the PBs I was aiming for? Well, there are a few reasons.

For a start, the coronavirus lockdown means getting out to Buninyong to ride up a hill doesn’t just feel irresponsible, it’s probably skirting the edge of what’s even legal. The weather has also taken a considerable turn, and as it gets wetter and colder in Melbourne, I’m keen to focus more on running for a while.

And then there’s the fact that, with my current fitness, I simply wasn’t going to get a new PB on the 1 in 20. That might sound defeatist, but I think it’s the truth. I had three goes at it in the past month or so — the last of those on April 18 — and my best time was still 22 seconds off my PB. If I’m to snag a new PB there, I think I need to reload and have another shot at building my form … once the weather is better.

I’m disappointed not to have set a new PB for every climb I attempted, but I’m very happy with how it went overall. At the start of the project I set myself 21 targets and I ended up with 19 new PBs. I also added six new targets along the way, and I managed to get all of those. It’s hard not to be happy with 25 out of 27.

In wrapping up the project I thought I’d highlight some of the most memorable or significant moments. Here are the ones that stand out:

Biggest PB on a climb I’d ridden hard before: This is a tie between Challambra Crescent in Geelong and The Crescent in the Dandenongs. I improved my time by around 9% on both climbs which I was very happy with. I’d say Challambra is the more significant result though, given how steep the climb is, and given that I rode it almost full-gas to set my previous PB up there.

Smallest PB: On Norton Summit in Adelaide I only improved by 1.7% over my best time. But like with Basin-Olinda, this didn’t feel like a true representation of my abilities — this new PB wasn’t a max effort.

Here’s something else I found interesting. Before the project began I went through Strava and worked out my rank on each climb I was attempting. For each of those climbs, I worked out what percentile my best fell in. For example, on the 1 in 20, my best of 16:45 had me 1,039th out of 19,185 riders (at the time), making my time better than 94.58% of other riders out there.

I found that doing this for each climb a) gave me a sense of where I fit in the grand scheme of things, but more importantly b) helped me work out which climbs would be harder or easier to set new times on.

In theory, my absolute best should give me more or less the same percentage score on any given climb. This isn’t quite how it works out in reality — climbs raced by the pros skew this, as do climbs where far fewer people have ridden them full gas — but it’s close enough that it allowed me to see where I could make big improvements.

There were many great moments throughout the project; indeed almost every new PB was something to celebrate. But there were three PBs that stood out above the others. Here they are in reverse order:

3. Main Road, Eltham: If you’ve been following this series since the start you’ll know that I had something of a tough time getting this one. It took me four full-gas attempts spread over several months. When I finally got there it was a great relief.

2. Kinglake: I’d had several attempts at this PB over the years and failed on several occasions. I went into this one feeling pretty apprehensive but managed to ride away with a new best by 43 seconds. Such a satisfying moment.

1. Mt. Donna Buang: Setting a new PB up this climb was the clear highlight of the project. It’s long been a favourite climb of mine, and for years I’ve been wanting a new PB. The last time I set a new PB I managed it by only one second, so I assumed I was nearing my peak performance on the climb.

So what have I learned in the past six months? Here are some things that stand out:

– This was a great way to stay motivated: In recent summers I’ve found my riding to be rather listless, without a real goal to keep me focused. I didn’t have that problem this time around. The PBs Project was always in the back of my mind, and every time I went out on the bike I had something to work towards. I was always excited to get some training in, and attempt a new best time.

– My strategy of a slow build-up seemed to work pretty well: I started with the easier climbs to PB and worked towards the harder ones, using the earlier climbs as training. That seemed to work well in not only ramping up my fitness over time, but leaving me feeling like I was always making progress, and always striving towards the next climb on the list.

– The beauty of this challenge is that it’s totally individual: It didn’t matter how my times compared to others around me, all I was worried about was beating my own time. Sure, I checked to see my ranking for each climb, but moving up the rankings was never the goal — this was all about personal improvement. I like that this is a challenge anyone can take on, without the need to compare with others.

– Missing out on a few climbs has left me motivated for more: I’m happy with how it went overall, but I’d really like to tick off those two climbs I missed. There’s also a whole raft of climbs I didn’t add to the list, mainly because of how far away they are. I’d love to get back to the Victorian Alps, say, or the Grampians, and try to set some new PBs there. I got a bit of a taste of alpine climbing at the Jayco Herald Sun Tour and that had me thinking about what else I could target …

At this stage, I’m pretty keen on returning to the project next summer. I’m not exactly sure what that will look like, but it certainly still has appeal. In the meantime though, I’ve got another couple projects in mind.

As mentioned, I’ve started running more in recent weeks and I’m looking forward to targeting some new PBs on that front as well. And in terms of cycling, I’ve actually got an interesting challenge coming up in the next week or so. Those who have been following me on Strava will have an idea of what I’m planning, but essentially it involves one long ride in close proximity to my house. Stay posted for that one.

I hope you’ve taken something from the PBs Project, whether it’s just a little bit of entertainment or hopefully even some inspiration to try something similar for yourself. It’s certainly been a blast from my end and I can’t wait to do it all again soon.

5 Replies to “The PBs Project: What I learned along the way”