For most of us mere mortals, even just getting up Mt. Baw Baw is a huge challenge. But every April, several hundred hardy souls venture to West Gippsland not just to ride up Mt. Baw Baw, but to race up it. The Baw Baw Classic is among the hardest single-day bike races in Australia and concludes with the epic climb to the Mt. Baw Baw village.

In this guest post, Jason Spencer from Team Budget Forklifts describes his preparation for last Sunday’s Baw Baw Classic and explains how the day unfolded, landing him with a podium finish. Oh, and if you feel like you’ve seen the name ‘Jason Spencer’ before, you probably have; he’s the guy who seemingly has every Strava KOM in Victoria.

In the lead-up to this year’s race I was feeling reasonably confident of a good result. My training had been going well and I had completed a couple of rides earlier in the week that I was happy with. I got a PB at the Kew Boulevard TT and a PB by 1.5 minutes up the 1 in 20 [ed: just a casual time of 13 minutes 20 seconds!].

I also had the help of a very strong team for the first time, as I’m now riding for Team Budget Forklifts. We had five riders in the race: Mark O’Brien (Melbourne), Blair Windsor (Bathurst), myself as well as Luke Ockerby and Peter Loft who both made the trip from Tasmania specifically for the race.

We went into the race knowing we would have a big battle ahead of us with a number of very strong riders from the Search2retain, Genesys Wealth Advisers, African Safari and Drapac Porsche teams. We also had a number of strong Institute of Sport riders to contend with, particularly from South Australia and Victoria.

All up there was a field of 77 riders in A grade with a number of noted climbers that could potentially win the race. The two biggest threats I saw before the start were both from Genesys: two-time Baw Baw Classic winner Nathan Earle and 2011 U23 Australian Champion Ben Dyball. Genesys Wealth Advisers had a strong team of nine riders on the start list against our five.

Our team went into the race with a plan to deliver myself and Mark O’Brien to the final climb in a good position. But as the race went on this seemed to become harder and harder with Genesys holding an advantage in strength and numbers.

Roughly 25km into the race a break of eight riders went clear including Robbie Hucker (Torq – current U23 Australian MTB champion), Blake Hose (Genesys) Blair Windsor (Budget Forklifts), Luke Fetch (Search2retain), Fergus Sully (Bike Gallery), Stuart Grimsey (Drapac-Porsche) and a couple of others. This proved to be an extremely dangerous break, and knowing the great form Blake Hose had shown at the National Championships in January our team decided it wasn’t a breakaway we were prepared to let go.

The first 50km were very hard and it certainly took the spring out of the legs with lots of attacking riding. But the Baw Baw Classic doesn’t truly start until Vespers Hill which climbs out of Noojee.

It’s a very steep climb and one which usually leaves around 10-20 riders left to contest the race. This year the pace seemed particularly tough up Vespers, with Genesys setting a vicious pace and using up riders on the early slopes of the climb. At the top there were just under 20 riders from the peloton left with another eight riders still up the road in the break.

Shortly after Vespers the Genesys team boss announced that Blake Hose was away solo from the breakaway. And while this was apparently never true, it meant Genesys were unlikely to help chase down the break.

There were no other teams with numbers left and Mark and myself were left in a tricky situation. The pace slowed on the following climb and then the attacks started. I was lucky enough to go with the right move and we had a group of four, three of which were happy to work together. So Matthew Clark (Wangaratta; Mt Buller road race winner), Phillip Mundy (South Australian Institute of Sport) and I worked together through the twisty, undulating terrain until the base of Mt. Baw Baw while Nathan Earle (Genesys) scored a free ride.

I tried to force the pace on the final descent from Tanjil Bren, opening up a gap on Matt and Phil and forcing Nathan chase for a bit at the base. I tried to convince Nathan to work with me but again he declined, so I chose to sit up and wait for the other two guys.

As we started the final 6.7km climb — which averages a gruelling 11.3% — we made our first sighting of the four remaining riders from the day-long breakaway. 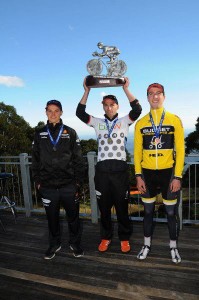 Around 1km into the climb we still had seven riders together and from that point the group slowly whittled away. With just under 5km remaining, the road flattened out briefly and Nathan Earle put in a very hard attack at the exact point he had done two years earlier when he last won the race.

Nobody responded and he rode away to claim a convincing win by 1 minute and 32 seconds. For the remainder of the race Blake Hose and I rode up the hill neck and neck. Almost nothing could separate us as we each tried to dislodge one another in a battle of who could suffer the most.

The attacks started in the final 2km. Even after the 20%+ ramps on the climb neither of us were able to crack the other and so it ended up in a head-to-head sprint to the line. Blake got the better of me as my legs had nothing left to give, beginning to cramp in the sprint. Third place for me — my best result so far.

Regardless of whether you have hopes of a high finish in A grade or just want to finish, it’s a seriously tough race and everyone shares the same pain up the steep slopes of the brutal final climb.

Click here to see Jason’s (phenomenal) Strava data from the Mt. Baw Baw Classic. Full results from all grades, men and women, can be found here.