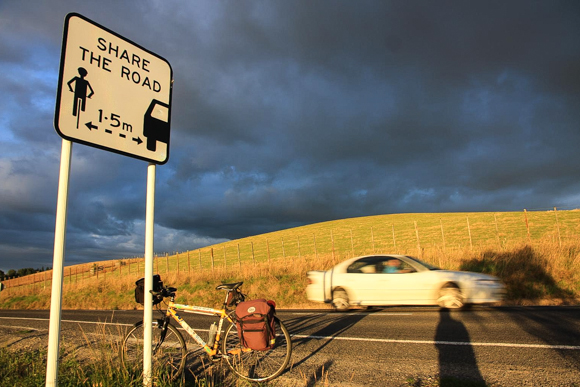 There’s no doubt that the relationship between cyclists and motorists is strained. You only need look at the comments section of any cycling-related article on a mainstream media website to see what I’m talking about. Or, alternatively, you could watch this story from Channel Seven’s Sunday Night last weekend.

The piece ended, admirably enough, with the suggestion that we need to find a way for all road users to share the road and actually get along. But thinking about it immediately after the show aired I realised the report had done nothing to actually move things in that direction.

Rather than offering some kind of insight into how cyclists can best get along with motorists, and vice versa, Channel Seven stuck to the tried and true method of appealing to the lowest common denominator, rolling out the likes of Derryn Hinch to cause controversy, to anger cyclists, and to affirm the beliefs of cyclist-hating viewers.

But this post isn’t about Derryn Hinch’s ignorance and stupidity — it’s about looking at the bigger issue and trying to move forward.

As overblown as the whole “war on our roads” idea is, there is a culture of mistrust and anger between cyclists and motorists and little appears to be changing.

It’s a conflict that’s fuelled by a lack of  understanding, selfish behaviour on both sides and a smattering of unnecessary aggression as well. Both sides are responsible for prolonging the tension and both sides make mistakes on the road.

Drivers often get too close to us cyclists, trying to sneak past inside the left-hand lane when there probably isn’t enough room to do so. And barely a ride goes by when I don’t see drivers flinging open car doors or stepping out into bike lanes without looking.

But on the flipside, the number of cyclists I see running red lights, riding more than two abreast and generally showing a lack of respect to other road users is extremely frustrating.

But throwing blame around doesn’t help anyone. This is about something bigger — it’s about trying to change, in some small way, how road users of all types interact and how we share the road. And that’s why I’m interested in Bicycle Network’s “Lead the Way” campaign.

The campaign is only in its infancy but its purpose is to encourage us road cyclists to take a look at our own behaviour, and to encourage us to commit to behaving in a way that’s respectful to all road users.

I think it’s important to be realistic here. It’s extremely difficult to change ingrained behaviours overnight and to precipitate a complete overhaul of the way our roads are used.

There’s a lot of ill feeling out there — from both sides — and so much history that it’s almost impossible for a motorist to hit the reset button and say “you’re right, cyclists do have a right to be on the road” if they don’t already believe it. It’s also unlikely that getting up on a soapbox and telling people how to behave will do much good at all.

My boss Wade Wallace (from CyclingTips) told me of an early-morning Beach Road bunch ride some years ago when former Olympic cyclist Rob Crowe got up and gave a speech along the lines of “alright, let’s stop acting like we own the road”. Even with Crowie’s reputation as one of the most respected cyclists in Melbourne, no-one listened. In fact, the response, from what I understand, was quite hostile.

So this isn’t about me saying what I think you should do. It’s about me looking at my own behaviour and trying to act in a way that sets a good example. Things like obeying the road rules are obvious — I’m more interested in a holistic approach, asking myself “am I showing respect to other road users here?”

Sure, it’s important for cyclists to feel confident exercising their rights on the road, but if you’re able to show a bit of respect to others without putting yourself at risk, why not do so?

I think it’s important to remember that cyclists are the most vulnerable of all road users and every time we go for a ride we place our lives in the hands of strangers. The greater the respect those strangers have for us cyclists the better.

Again, this isn’t about telling you what to do when you’re riding on the road. It’s about what I’m going to do to ensure that I’m sharing the road and doing what I can to show motorists (and others) that cyclists can be respectful. If you want to take what I’ve written on board and consider your own behaviour then that’s a bonus.

70 Replies to “Sharing the road and leading the way”