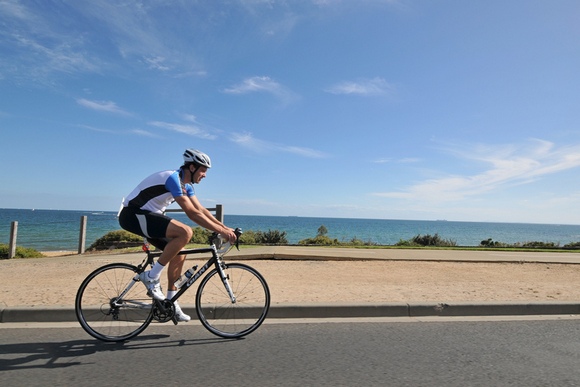 Given I much prefer riding bikes up and down hills than on flat roads, Melbourne’s Beach Road shouldn’t have any real appeal. The super-popular 46km ride from St. Kilda to Mordialloc and back is almost entirely flat with only a couple of short rises along the way. And yet I always come home from a Beach Road spin feeling satisfied and energised.

I think part of the reason I always enjoy it is the fact I ride it so seldom. In fact, my ride to Mordialloc and back on Saturday was the first time I’ve ventured out to Beach Road in more than a year … and that was more than year after my previous Beach Road ride.

I know many people that ride Beach Road three or four times a week (if not more), whether that’s as part of a semi-organised ride like the North Road Ride (which comes back via Beach Road) or the infamous Hell Ride, or as part of a team ride or social ride for coffee in Mordi. I couldn’t think of anything worse than riding the same strip of road over and over again, several times a week.

Besides the fact it’s a nice change of pace for me, I quite enjoy Beach Road because of the challenge it presents. Just because a road is dead flat doesn’t mean it’s not tough. Or putting it another way, a road is only as hard as you choose to make it.

Sure, it’s possible to roll to Mordialloc and back at about 25km/h and barely break a sweat. But ramp that up to 35-40km/h and you’re looking at a ride every bit as hard as hilly climbfest. And then there’s the wind to contend with.

When you do most of your riding in forested hills like the Dandenongs, the strength and direction of the wind becomes largely irrelevant. Head out to Beach Road, however, and there’s nowhere to hide. That was the case on Saturday when my brother Brendan and I flew down to Mordialloc with the assistance of a stiff tailwind, feeling slightly smug as we watch riders battle into the wind as they made their way back into town. It’s fair to say we weren’t feeling so smug when we turned around.

A strong head or cross-headwind can make the ride from Mordialloc back to St. Kilda a real drag and even though we spent some time working with a small group to stay out of the wind, it was a far cry from the easy spin in the opposite direction. But I didn’t mind at all. In fact I relished the opportunity and the challenge of riding in conditions I wouldn’t normally.

One thing I’ve learned in recent years is that if you only do long, slow rides in the hills, then, generally speaking, that’s the only sort of riding you’re going to be any good at. This became very clear on a ride back in early 2012 with a bunch of mates — I was comfortable on the climbs but I couldn’t keep up with the guys whenever the road was flat.

And then at the Northern Suburbs 3 Day Tour in 2013 I always felt comfortable on the climbs (in the sense that I was able to maintain good position in the bunch) but on the flatter sections I found myself struggling to keep up. The flatter time trial, too, was a bit of a disaster — a better result there would likely have resulted in a top-five finish overall.

Riding Beach Road always feels like a different kind of workout to what I normally do — particularly when it’s windy — and the kind of workout I need if I’m going to become a more rounded cyclist. Sure, one ride isn’t going to do anything, but it’s a great reminder of the value of flatter roads and besides, I always come home having enjoyed myself.

Unlike some people, I also love the fact that Beach Road is so popular. It’s a nice change being on a strip of road where cyclists outnumber cars and where there’s always a group to latch on to (and to help work, if they want you to). I also like the fact that there’s such a spread of abilities out there, everyone from first-time riders to Grand Tour stage winners. This means you’ll always be faster than someone (good for the ego) and you’ll always be slower than someone else (good for the motivation).

So if you’re like me and you love riding in the hills — and what’s not to love? — make sure you take the time to head for flatter roads every once in a while as well. If nothing else it will give you a nice change of scenery and you might also find that it does wonders for your cycling.

3 Replies to “Why I love cycling on Beach Road”