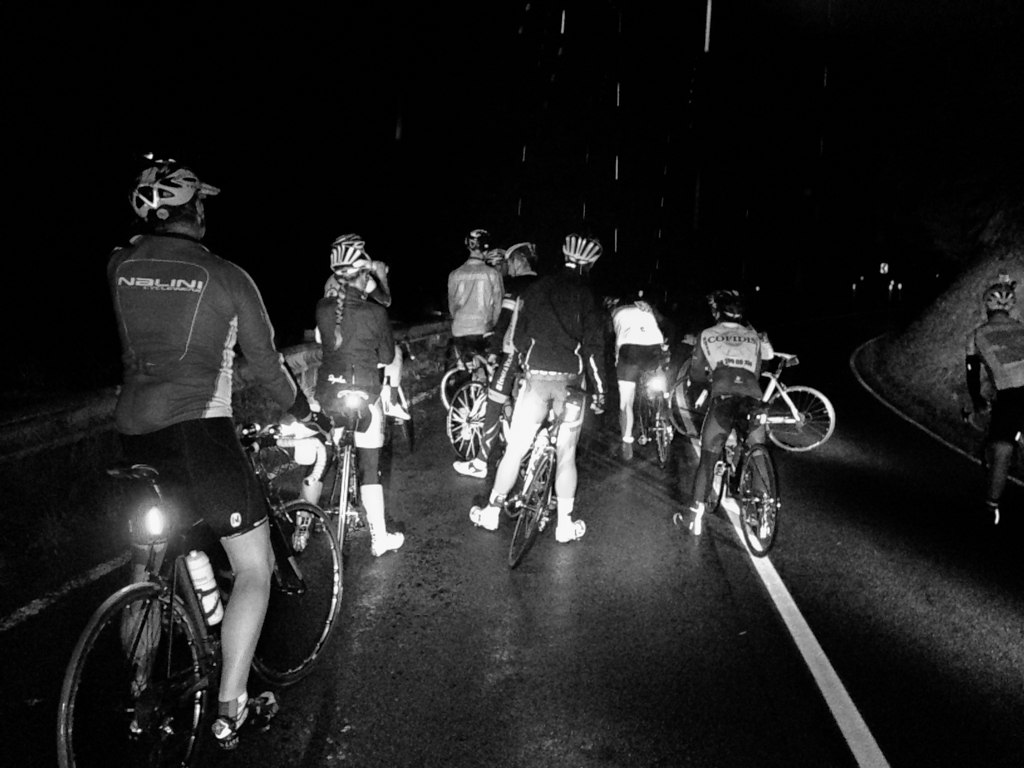 With the 3 Peaks Challenge behind me for another year, and with winter fast approaching, it’s time to refocus, to find a new cycling goal. For a start, I want to make sure that my fitness doesn’t drop off and that I’m still doing a decent amount of riding through the cooler months. I’m also keen to get into a bit of road racing through the Northern Combine.

But most of all, I want this winter to be one of adventure and exploration. Last year I did a handful of such rides with the Hells 500 gang, including Donna Done Dirty and Around the Lake. This year, I’d like to do even more rides like that, to explore and experience this great state of ours. And what better way to kick off a season of adventure riding than a climb of Mt. Donna Buang on a Friday night, after work, in the pitch-dark, and the rain?

A dozen of us met at Warburton at about 9pm and set off towards the start of the climb, a sea of white and red lights flickering in the darkness. The plan had been to stay as one big group up the climb but it didn’t quite work that way. Within the first kilometre the group was spread up and down the road but we made sure no-one was left to ride on their own.

We rode considerably slower than we normally would up Donna, but PBs were never the point of the exercise.

I must have climbed Mt. Donna Buang 20 or more times and it’s fair to say that I’m reasonably familiar with the climb’s various twists and turns. But in the dark, everything changes. Your vision is limited to the 50m or so in front of you, and it’s not until you hit a steeper ramp that you realise it’s there. Being able to transform a familiar ride into something completely different is a lot of fun.

The sound of birds and other wildlife was nearly constant and while there was heavy cloud cover for a lot of the ride, at times the moon peeked its head out, giving us a bit of extra light to play with.

We all regrouped at Cement Creek — roughly halfway up the climb — before setting off and splitting up again. By this point there was a bit of drizzle around but it wasn’t heavy enough to be too inconvenient. Far from it.

Climbing Donna Buang is already a pretty peaceful experience during the day (unless you’re pushing hard) but last night, with almost no cars around and with very few sounds apart from the wildlife around us, it was even more tranquil than usual. The addition of a light drizzle merely added to the natural beauty of the ride. But, I must admit, the rain did make me a little concerned about the descent. More so than I already was.

The only other time I’ve climbed a mountain at night was during our last trip to Mt. Buller when my brother Brendan and I descended from the village and started climbing at about midnight. It was a gloriously warm and clear night and we were screaming down the hill a little faster than we probably should have been. As we rounded a bend in the final kilometre of the descent, we came across a wallaby or small kangaroo that was sitting in the middle of our lane.

If it hadn’t have hopped out of the way at the last minute one or both of us would almost certainly have hit it. As it was I’d been skidding for a few metres and I almost collected Brendan in my attempt to miss the wallaby/kangaroo. And while all three of us managed to get away unharmed, it did make me a little more cautious when it came time to descend Donna last night. 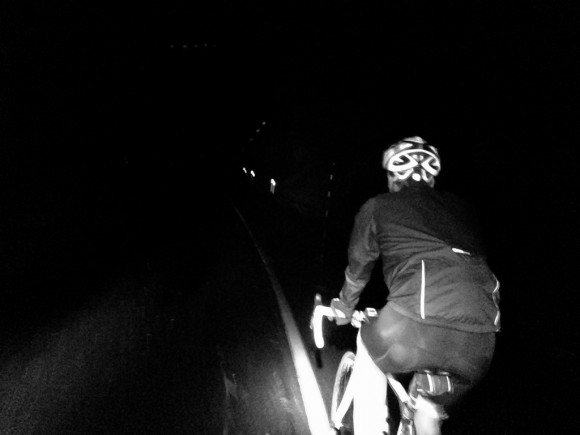 After meeting everyone at the carpark at the top and enjoying some doughnuts and hot chocolate courtesy of 7 Peaks support crew member Maria, we rolled back down with a light rain still falling. The combination of rain, wet roads, fog, darkness and my Buller experience were enough to make me take it very easy on the way down.

I rolled most of the way down to Warburton with Andrew Moodie, chatting about this and that, and while we were both quite cold, the time passed a lot quicker than it would have otherwise.

In a way it’s strange that climbing a mountain could be more enjoyable that descending it but on Mt. Donna Buang — and on most climbs — heading down can be a bit of drag when it’s cold and wet. But, we all got back to Warburton safe and sound a little after midnight and after a quick chat it was time to head home.

Thanks to the crew that came out and joined me on the ride and kudos to Andy who rode to Warburton from Port Melbourne after work (and looked a little worse for wear when we got there!) and to Joel who smashed out a PB on Donna before meeting the rest of us for a more leisurely climb. And finally, thanks again to Maria for providing the food and drink, and a lift down the mountain for a couple of cold riders!

Have you ever climbed a mountain in the dark? How did it go? Would you do it again?

25 Replies to “Doing Donna in the Dark”