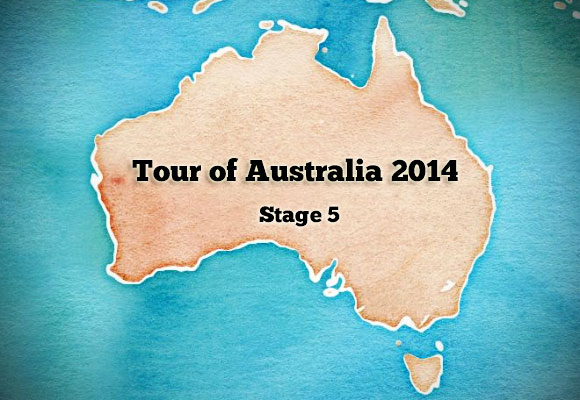 Inspired by the Giro d’Italia, the Tour de France and the Vuelta a Espana, the Tour of Australia is a fictional three-week Grand Tour route created by David Blom and Matt de Neef to showcase some of Australia’s best cycling roads. This is the second year of the race and today we reveal stage 5 of the 2014 edition.

After a 2.5 hour transfer from Inverell the night before, the race resumes on stage 5 in Australia’s country music capital, Tamworth. From Tamworth the race heads further inland, to the west, and in the direction of Coonabarabran.

From Tamworth to the first intermediate sprint in Gunnedah it’s a largely flat 76.5km along the Oxley Highway. Another 50km up the highway the road starts to climb, not particularly steeply, but for the next 40km or so it’s ever so slightly uphill. It won’t be enough to put riders in difficulty, but it might leave their legs a little heavier for the final challenge of the day than they might have been if the road was flat.

At the 148km mark the riders contest the second and final intermediate sprint point, in the tiny town of Rocky Glen, at which point the road bends south west towards Coonabarabran. The riders hit the outskirts of that particular town after 180km of racing but they won’t have time to look around — the stage continues on, finishing roughly 27km away at the Siding Springs Observatory, one of Australia’s most famous telescopes.

It’s almost entirely uphill from Coonabarabran to the end of the stage, albeit gently, which includes a final uphill drag of 4.1km at an average gradient of 6%.

This could be the first stage that we see any real action from the contenders for the general classification. The final climb isn’t long or particularly steep, but it is still likely to force a significant thinning of what’s left of the main field, with the best climbers emerging at the head of affairs.

Expect the pace to be high as the riders approach the base of the final climb with the domestiques working hard to get their leaders in position to respond to (or perhaps initiate) any attacks.

While a breakaway would almost certainly be allowed to go clear early in this stage it’s hard to see them surviving to the end. But then again the GC contenders could decide to let smaller-name riders contest the finish, knowing they’ll be able to create significant time gaps when it comes to the real mountains.