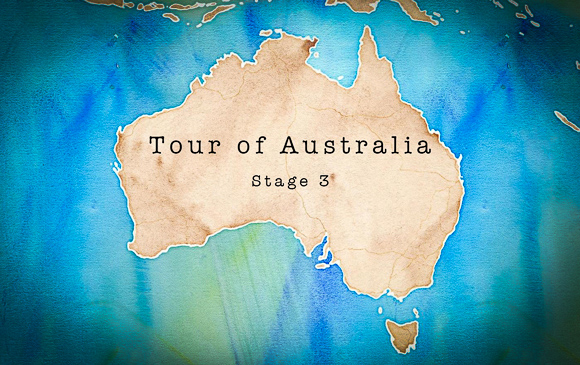 We’ve put together a course for a three-week race that takes in some of the best roads in the country in an attempt to create cycling’s fourth Grand Tour: the Tour of Australia. We’re currently revealing one stage per day in the lead-up to the Tour de France. This is stage 3.

Click here to see the route on RideWithGPS, including details of the intermediate sprint points and the KOM points.

On stage 3 of the Tour of Australia the riders get their first taste of the bigger mountains and their first summit finish. The stage starts off in a friendly enough manner, heading south west out of Horsham on pancake flat roads before looping back around to the east on Jallumba-Mockinya Road.

After rejoining the Henty Highway the riders head south before taking a left onto Brimpaen-Laharum Road and heading through the stage’s only intermediate sprint point after 89km. At the Northern Grampians Road the riders take a right-hand turn and ready themselves for the 12km-long, 1st category climb into the hills of the Grampians.

From the KOM point 128km into the stage the riders head along Silverband Road which features a stunning one-lane descent out to the Grampians Road. After 147km of riding the peloton will turn left and begin the tough ascent of Mt. William: the first hors categorie climb of the Tour and a brutal way to end the stage.

With a flat start to the stage expect the sprinters to come out in search of the intermediate sprint points before dropping back as soon as the road goes up. The first climb, while not particularly steep, will almost certainly split the bunch leaving only a select bunch of riders to battle it out when they reach the slopes of Mt. William.

The final climb, particularly the last section to the summit, will suit the pure climbers, with a final section that averages 10%+ and that has a maximum gradient well in excess of 20%. In all, it’s 11.5km to the summit at 7.5% but that average gradient doesn’t give you a sense of just how hard the final 2km really are.

For spectators watching the stage at home on TV there will be no shortage of amazing vision as the riders head through the Grampians National Park with sweeping vistas, narrow fern-surrounded roads and native bush aplenty. And with many great rides, walks, hikes, waterfalls and lookouts to check out, it’s not hard to imagine a fair crowd descending on the Grampians for this Tuesday stage and staying for a couple days.

Stay posted for stage 4 of the Tour of Australia, coming tomorrow.