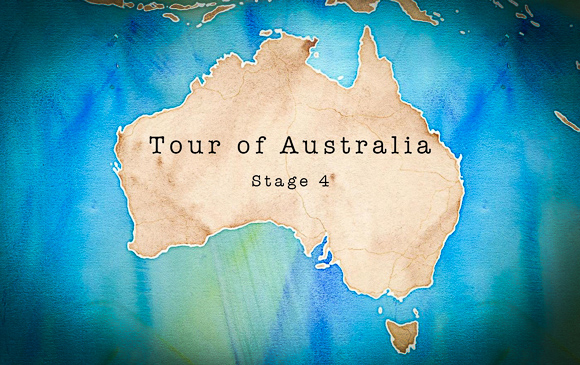 We’ve put together a course for a three-week race that takes in some of the best roads in the country in an attempt to create cycling’s fourth Grand Tour: the Tour of Australia. We’ll be revealing one stage per day in the lead-up to the Tour de France. This is stage 4.

After the brutal summit finish atop Mt. William the day before the riders will be grateful for an easier fourth stage of the Tour of Australia.

Starting in Halls Gap the riders will roll south down the largely flat Grampians valley with impressive, rocky hills on either side. After 35km of racing they’ll take a left and head over the first of only two climbs of the day, the 4th category Yarram Gap. The climb is only 2km long at 5.8% and is unlikely to cause any major difficulties in the peloton.

After descending the Yarram Gap the riders will head east and south towards Camperdown, passing through the stage’s two intermediate sprint points: in the small towns of Willaura after 64km and Worndoo after 110km. Apart from a few small rollers here and there, the route is more or less flat between the Yarram Gap descent (after 40km) and Camperdown, 179km into the stage.

After passing through Camperdown, the riders will head south east out of town towards the 1.9km category 4 climb of Mt. Leura. Stage 4 of the Tour of Australia finishes atop the 313m high extinct volcano, a favourite training ground of 1972 Munich Olympics road race silver medallist Clyde Sefton.

The climb is only short and not particularly steep (5.9% average) and it could suit a punchier, powerful rider like Philippe Gilbert who mightn’t be able to keep up with the pure climbers on a long climb, but who can power his way up a short climb like Mt. Leura.

Expect the GC contenders to mark one another’s moves at the front of the field without launching a stage-winning attack. The sprinters, meanwhile, will have done their bit earlier in the day in contesting the intermediate sprints and will go into energy-saving mode up the climb.

Stay posted for stage 5 of the Tour of Australia, coming tomorrow.

3 Replies to “Tour of Australia: stage 4”