As a recreational cyclist that’s spent the past few years getting stronger and faster on the bike, there’s a question that keeps resurfacing in my mind: ‘What’s the limit of my cycling ability?’

I suspect it’s a question that most (if not all) cyclists find themselves asking at one point or another and for me, trying to answer that question is one of the biggest appeals of cycling and sport in general — how far can I push myself before it becomes too much?

It’s one of the reasons I enjoy doing long, tough rides like the 3 Peaks Challenge or, to answer a question I posed last week but never really answered, why I enjoy doing hill repeats.

And so, after managing two climbs of Mt. Donna Buang the Sunday before last, the inevitable question in my mind was: ‘Could I have done three?’

On the Sunday just gone, I tried to find the answer.

I put the call out on Facebook and Twitter and at 8am on Sunday morning roughly 10-15 of us gathered in Warburton, poised to take on Mt. Donna Buang at least twice and, hopefully, three times. The group was dominated by riders wearing Croydon Cycleworks kit including none other than former European pro and recent winner of the men’s race at Amy’s Gran Fondo Tom Leaper.

Tom and the rest of the Croydon Cycleworks bunch set off up the hill ahead of us at a cracking pace while Matt ‘Fletch’ Fletcher and I tried to find a comfortable rhythm in the early kilometres. As it turned out we climbed a little faster than I was expecting and while we weren’t really at our limits at all, we managed to set a respectable first climb time of 1 hour 12 minutes.

At the top of the climb it was time to rug up and descend back to Warburton. I’d taken a musette with me containing a scarf, beanie and thicker gloves, scarred from a handful of freezing Donna descents over the past few months. But in the end the descent was warmer than I had expected and I didn’t have to bother with the scarf or beanie.

As we reached Cement Creek on our descent — roughly halfway down the mountain — Tom Leaper roared past us on the way back up the hill for his second climb of the day. The dude is scary quick and it was an honour just to be on the same mountain as him!

When Fletch and I started the climb for the second time we had a few other riders join us — Matt Whiting, Michael Prior and James Singleton. James sadly dropped off the back after 5km with, I’ve since learned, a flat tyre and it was left to Michael and we three Matts to work our way toward the summit for the second time that day.

Those final few kilometres before Cement Creek were pretty painful the second time up, certainly more painful than they had been on the second climb the week before. When we reached the slightly easier second half of the climb Michael dashed away with ease, leaving Matt, Matt and I to grind our way towards the summit.

That steep final kilometre before the summit certainly has a bit of bite to it, especially when your legs are fatigued from the climb you’ve done earlier in the day. Quote of the day goes to Fletch who, upon reaching that steep section for the second time, said: ‘You keep going mate, I need a bit of Fletch time.’ While he did fall slightly off the back at the end there, I really didn’t have much more in the legs than he did — I was hurting too.

Michael waited for us at the top and the four of us had a chat about whether we’d continue on for a third climb. Michael and Fletch were done for the day, the former pining for a latte and a tasty treat from the bakery and the latter suffering from knee pain.

The four of us descended and after a few minutes spent chatting to Fletch and Michael I was ready to try and get through a third ascent of Mt. Donna Buang. I knew that if I got started on the climb I wouldn’t let myself not finish it — I just had to get started before the option of sitting in the bakery proved too tempting.

Within a few hundred metres my legs started to complain and Matt (who was joining me for his third effort of the day as well) wasn’t faring much better. We didn’t speak much over the next 16.8km but it was invaluable having someone else there to share the suffering with. I think it would have been a lot harder to get through that third climb if I was riding alone. Thanks Matt!

Which isn’t to say it wasn’t hard enough already — it was. Those final few kilometres before Cement Creek were a killer once more and, more than ever, the brief flat section at the halfway hairpin was a tremendous relief. The pace was never fast and at times it felt as if we could have been walking faster. But we continued on, the summit getting closer with every laboured pedal stroke. Speaking of laboured strokes, kudos to the bloke on roller skis who was making his way slowly but surely up the mountain. A terrific effort!

In my mind there was never any doubt  I’d be able to finish that third climb. I had started the day with a Triple Donna as my clear goal and anything less would have been a disappointment. That certainty didn’t make the last kilometre any easier.

It was a total out-of-the-saddle grindfest on fatigued, powerless legs. But, as hard as it was, I still managed to find that last kilometre enjoyable. It’s amazing how having the end in sight can make pain seem less, well, painful, and the challenging seem less so.

In the end we managed that final climb in around 1 hour 27 minutes — roughly the same time it took  Brendan and I the previous weekend on each of our two climbs. I was well chuffed with that and glad just to have gotten to the top in one piece. The expression on Matt’s face said something similar as he sat on a rock at the top of the mountain looking utterly shattered.

We descended toward Warburton for the third and final time that day, enjoying the fact the roads had dried off over the course of the morning and that it was also significantly warmer than it had been on the first two descents.

As Matt and I sat at the Warburton Bakery filling up on all manner of delicious and well-earned treats, I couldn’t help thinking: ‘Could I have managed a fourth ascent?’

As hard as the third climb was — and don’t get me wrong, it was very tough — I still reckon I had a bit left in the tank at the top. The first few times I climbed Mt. Donna Buang, several years ago now, I had to stop a couple of times. After that, a stop at Cement Creek became a tradition.

But I didn’t feel the need to stop on the third time up Donna on Sunday, despite it being tough, which makes me think maybe, just maybe, I would have made it had I attempted a fourth ascent.

So, with that in mind, who’s up for a Quadruple Donna?

Before I wrap this up, I’d just like to share a couple bits of news with you all.

As some of you might have seen, myself and Andy van Bergen from the Hells 500 cycling collective are running a series of rides in the coming months — the 7 Peaks Domestique Series. The concept is simple: we want to help as many cyclists conquer the 7 Peaks Alpine Ascent Challenge as we can.

To that end, we’ll be running a series of rides up each of the seven climbs (Mt. Buller, Mt. Buffalo, Mt. Baw Baw, Lake Mountain, Mt. Hotham, Dinner Plain and Falls Creek) in which we’ll be helping riders of all abilities, men and women, finish the climbs in one piece. We’ll be making sure that if you commit to finishing the climb, you won’t get left behind … no matter how slow you are. 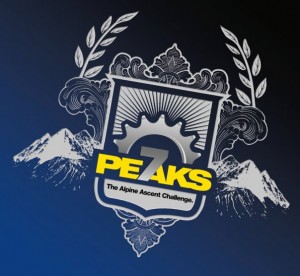 It’s totally free to come along and if you want to do so, all you need do is sign up for a 7 Peaks passport and then ‘Join’, on Facebook, each of the rides you want to attend. For all of the details, including ride dates and links to the relevant Facebook event pages, visit the 7 Peaks Domestique Series hub page. We’ll be updating that page frequently.

And while I’m on the subject of doing lots of climbing, some of you might recall that I set myself a goal some weeks ago of notching up 10,000km and 120,000m of climbing for the 2012 calendar year.

With 11 weeks to go, I’m still on target, requiring roughly 205km and 2,030m climbing per week. Riding each of the 7 Peaks a couple times in the next few months will really help to clock up the kilometres and the vertical metres and hopefully I’ll reach my targets without too many problems.

And finally, I’m riding this Sunday in Bicycle Network Victoria’s Around the Bay in a Day (ATB). All going well, it will be the third time I’ve completed the event and while it’s not a climbing event by any stretch of the imagination (the Westgate Bridge nonwithstanding), I am looking forward to the ride and the great atmosphere that ATB always generates.

Thanks very much for reading and remember, if you haven’t already, come and say hi over at Twitter and/or Facebook. You can also follow me (Matt) on Strava and, if you like, you can sign up to get an email update whenever I publish a new post on the site. Just click on the envelope icon at the top left of this page.

Until next time, be sure to stay safe on the roads.