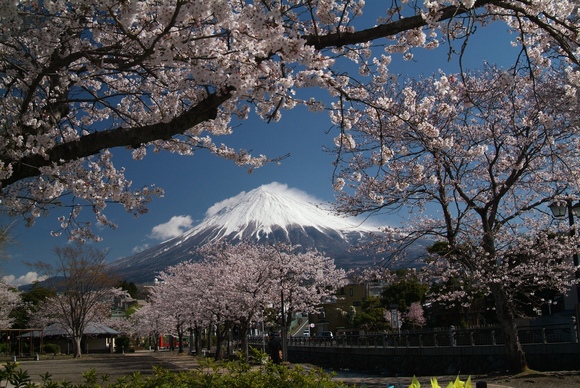 There‘s no doubt that Japan’s Mt. Fuji is stunning from a distance, but when you’re climbing it by bike, particularly in a race, there’s little time to appreciate its natural beauty.

Huon-Genesys rider Jono Lovelock has been good enough to pen a piece for The Climbing Cyclist about the 2013 Tour of Japan, which starts this Sunday and, more specifically,  about the brutal stage 4 climb up Mt. Fuji that he remembers all too well from last year’s race.

I still have nightmares to this very day. Some would even say I crashed on purpose a few weeks back, just to avoid another confrontation. What on earth am I talking about? Fujisan. Mt f#%&ing Fuji.

Furthermore, and just to prove the Japanese know what they’re talking about, there’s a Japanese proverb that roughly translates to: “He who climbs Mount Fuji is a wise man, he who climbs twice is a fool”. A phrase that proves as prophetic as it is prudent.

Each year in the Tour of Japan there are two types of riders: those who face Mt. Fuji for the first time, and those who can’t believe they are about to do it again. Like an evil mistress this mountain simply slaps you around and reduces you to tears.

There’s no canoodling or foreplay. Just complete and utter domination.

The Tour of Japan is hilly. Very hilly. Bar the prologue and the Fuji stage the rest of the race is composed of “championship” style circuit races, the majority of which involve a large amount of climbing. Generally though, the vertical metres sneak up on you through covert accumulation.

Riders spend the majority of the tour chasing wheels down descents, smelling the smokey wafts of cork on carbon as they rail into tight corners, putting in last-ditch efforts to survive over the top of small climbs, every lap. Thus, as riders complete each stage, they tend to:

If you want a review on one of the other stages from Tour of Japan, one of the particularly insane, particularly Japanese stages, check out a piece I wrote on my blog about the “circuit race of death” last year.

The history of Fuji

When Mt. Fuji was first introduced into the Tour of Japan riders tackled it as an individual time trial. Many riders endured the silent solo sufferance with current Orica-GreenEDGE riders Cam Meyer and Michael Matthews clocking top ten times in 2008 and 2010 respectively. Cam Meyer even went on to claim the overall tour in 2008.

Interestingly, pundits will also spy Jai Crawford coming in ahead of Meyer in 2008 and we can look forward to seeing the Hobart hill climber get re-acquainted with Fujisan when he hits the start line with the Huon-Genesys team this year. The ultimate eagle eyes amongst you will also have noticed one other crucial element in the results linked above. In 2008, Mt Fuji was an ITT. In 2010, it was a road race.

Yes, a mass start road race at the bottom of an 11.4km climb. A 11.4km climb with an average gradient of 10%. It’s so crazy. It’s so mad. Like watching a game show where pretty women must bob for apples in a tank full of spikey sea creatures it’s so very, Japanese.

Fujisan, on the other hand, is a veritable cluster-f**k.

A warm up is both a necessity and futile. The paradox is clear: line up early, be on the front. Good. But you will have cold legs. Bad Warm up long, be late, and be ready to go. Good. But you will be starting at the back. Bad. Either way you can’t win.

The gun goes and in what is likely the most important cleat-to-pedal engagement of your entire season you begin the certified shit-fight to get to the front. Then it’s a bum rush to stay there as the bunch ebbs and flows with 100  riders all trying to put themselves where only 20 belong. People are bashing bars, running into wheels and the multilingual melange of swear words fills your ears.

This is hectic. This is hard. But boy oh boy, this is a shitload of fun! It’s kind of like a Bay Crit that goes up L’Alpe d’Huez.

But now 500m has passed. Now the acid is rising. The red zone is nearing already. Your brain begins to take over. It tells you this is going to hurt a lot. It tells you that the current pace is someone else’s. You don’t need a Strava segment to tell you your ranking. You know. Today is not your day. The following 10km of agony and anguish just go on forever.

The first 3km are dead straight. They taunt you, and they tease you. Then it begins to twist and turn, and after halfway the climb just goes nuts. It’s as if you’ve just reached the summit of Arthurs Seat, only to find Mt. Baw Baw on top.

The 39×28 is not enough even on fresh legs. Give me a compact. Give me a long-cage derailleur, a 32-tooth cassette and a few extra links on my chain. Or preferably, give me a gun.

It starts to rain. And you start to weave. The only excitement you feel is trying not to fall over as you experience some bowel-loosening wheel spins on the metal grates that come every few hundred metres during the final kilometres of the climb. As the salt from your helmet aids in blurring your grovel to the line you begin to count down every pedal stroke.

And finally it is done. You get out of the wind, the rain, and the snow. It’s time for a hot tea, a hot coffee and a hot towel. Cleaned and changed you are ready for your hopeful redemption the next day. Unfortunately, it’s then that you realise the only thing scarier than facing Fuji again, perhaps, is driving down this bastard of a mountain in an overloaded tourist bus.

Then the undeniable aroma of a clutch burnt to within an inch of its life surrounds you. Sphincter-tightening would be the only fitting description. Nonetheless, we’re all alive to tell the story…

(Check out Jono’s pain-face at 1:41 in the video below. That’s him in the orange Genesys Wealth Advisers kit climbing Fujisan during last year’s Tour of Japan.)

The take home point of this post comes in part with the following clarification. Please do not assume my bizarre usage of the term ‘Japanese’ as an italicised adjective is meant to imply anything pejorative. It’s everything but. I love Asia. I love the food. I love the people. I love the culture. It’s just so different. And Japanese cycling is just that, different.

It takes on an entirely new level of excoriating punishment. It’s brutal. It’s bizarre. But it’s bloody brilliant. I reckon cycling worldwide should be just a little bit more Japanese.

Mt. Fuji is the highest mountain in Japan, topping out at 3,776m. There are three paved roads that climb this active volcano — the one discussed in this post is known as the Fuji-Azami Line and it approaches the summit from the east. This is the shortest of the three climbs, “only” taking you to about 1,930m of altitude. It’s also the steepest of the three climbs.

The most well-known climb is the Fuji-Subaru Line, from the north, which reaches 2,300m of altitude after climbing for 24km at an average gradient of 5.1%. The final climb comes from the south, reaching an altitude of nearly 2,400m after 13km of climbing at 7.1%.

And for this year?

The 2013 race will be gangbusters. Go grab Google translate and blast your way through these:

And get ready for two top-line Aussie teams, Huon-Genesys and Drapac, to take it up to Lampre, Vini-Fantini and the defending champions in Team Nippo. I won’t lie; I’m a bit jaded that I won’t be there. My training days pre-crash were fuelled by Fuji-fear. I was a Fuji-man. Ready for Fujisan. Hoping to kick arse in Japan. But now I am chained to the keyboard writing cheesy rhymes to pass the times (wait a minute …)

So as we hit the home straight in the Giro, and as stories about Sky leadership tensions, Wiggo’s mutton chops and the Colombian conspiracy begin to tire, take a peek at the Tour of Japan results when they pop up. Because this race is big, hard and honestly a bit scary.

The guys over there need all the support they can get, so go give it to ’em! Good luck lads!

Thanks very much to Jono for taking the time to write this piece. I wish him all the very best for his recovery. If you’d like to read more of Jono’s work, check out his blog. You can also follow him on Twitter. If you’ve got a climbing-related story you’d like to share, please feel free to get in touch. Feature image appears courtesy of henporai2000 on Flickr. Thanks to Cam at Cycling IQ for allowing us to republish a handful of photos.

20 Replies to “Guest post: The brutal Mt. Fuji and the Tour of Japan”