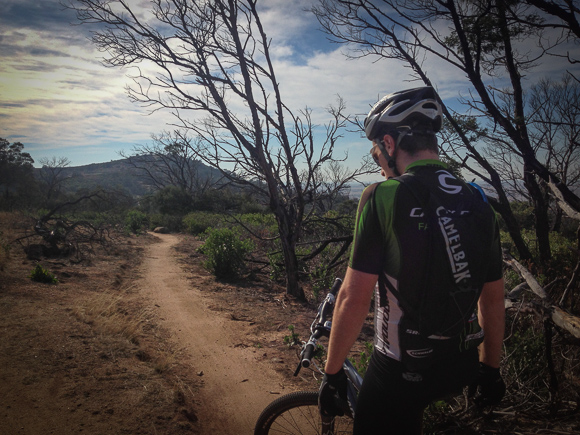 A few years back, when I was training for my first successful attempt at the 3 Peaks Challenge, I did a bit of mountain biking with my brother Brendan just to mix things up. Looking back at my earliest YouTube videos I can see that those trips to the Yarra Trails were nearly three years ago. I don’t think I’ve jumped on a mountain bike since then. Until last weekend anyway.

Brendan’s been spending a bit of time out on the trails in the You Yangs Regional Park down near Geelong and I was keen to see what it was all about. We drove out there on Saturday morning and for the next few hours I followed Brendan around as he showed me some of the many amazing trails in the park.

Heading into the ride I figured I’d be able to pick up where I left off and fly around the corners without any problems. Quite the opposite.  I was riding a mountain bike belonging to my youngest brother Ash and I had pumped the tyres up far too hard, meaning I was slipping and sliding around like an idiot to begin with. I was extremely rusty on the trails and it showed. I fell off three times on the day but the worst injury I got was a scrape to my elbow.

I had my GoPro attached to my helmet and managed to capture all three crashes on film. When the first spill happened my tyres were pumped up too hard, I hit a soft sandy corner too fast and paid the price, flying over the handlebars.

The second crash happened a short time later when I totally misjudged a left-hander which turned in front of a small tree on the opposite side of the track. Brendan was ahead of me and he misjudged the corner too, hitting the turn far too fast. But he had the skill to avoid a collision and negotiated the obstacle successfully. I managed to avoid the tree as well, but I must have locked up the brakes and before I knew it I was hitting the deck again.

I might have crashed three times on the day but Brendan took out the prize for the most impressive crash of the day. Riding ahead of me, Brendan hit a small jump and when he landed both wheels appeared to slip out from under him. He hit the deck hard, sliding along the dirt and colliding with a tree. I spoke to Brendan yesterday, a week after the ride, and his ribs are still sore.

The final crash of the day was one I knew was going to happen. There’s a ridiculously steep gravel climb, lovingly referred to as “Hell” on Strava, that’s 11.2% for 400m and that briefly gets above 20%. As we approached the climb I asked Brendan whether he thought it was possible to get up it without walking and he was sceptical, but I thought I’d give it a shot. I gave it absolutely everything up the steep stuff, trying to keep my weight back so the back wheel didn’t slip out, but forward so the front wheel didn’t lift up.

I got about halfway up before I lost traction, pedalled hopelessly on the spot for a second or so, and then fell unceremoniously in a heap.

We only rode about 32km for the day (my Garmin wouldn’t start for the first 4km) but it felt like we rode about three times that. We went pretty hard for the entire ride and it was a lot more draining that I remember mountain biking to be. But, it was a fantastic day and despite crashing a bunch of times, I had a whole lot of fun. I’ll certainly be back.

I managed to get a whole bunch of footage from the day (not just of the crashes) and put together this short video which shows the great variety of terrain and trails in and around the You Yangs. I hope you enjoy.