Following last week’s guest post from Deborah d’Avigdor about the Audax Alpine Classic 130km version, Chris Houghton wrote in with his thoughts about the event’s 140km version. Today’s guest post comes from Chris and was first published at his blog. 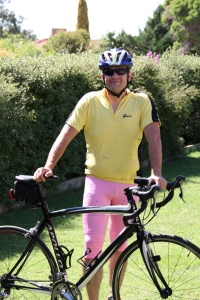 In November last year, I got it into my head that I wanted to ride the Audax Alpine Classic. So I entered.

I first heard about the Alpine Classic about a year earlier when one of the guys who not infrequently does a local group ride was talking about it. It sounded daunting. 200kms with 50+ kms of climbing? Good luck to you, no chance I’ll be doing it – zero interest.

And then a funny thing happened. I heard about Amy’s Ride Canberra from a mate of mine, and I agreed to do it with him. On investigating, I found that there was an Amy’s Ride Albury, with a single 7km hill in the middle. 130km? I can do that. 7km climb? I can do that. So I entered. The ride report for that ride is here.

After that, Amy’s Ride Canberra, and my first ever (and only) DNF. Not my fault though – my riding companion bugged out after three flats in very little time, and since he was my lift home, I went too.

Since then it has been a combination of running, riding and swimming but mostly running. As winter passed, I got back on the bike more seriously but life intervened from time to time and I just didn’t get as much time out as I wanted.

So, by November, I had decided to try the Alpine Classic. By the following month I had started increasing the kays again, and by early January I had finished my first 180km ride. Wagga isn’t a particularly hilly place – there are some good steep hills, but they’re short. I had no long climbs to train on so I worked on the premise that endurance was the key. After the 180, I took a week off, put in another full week of riding and then took a few more days off – and then I was off to Bright for the big day.

Having never been to Bright before, I was glad for the GPS in the car. I arrived in town about 4 and found my camp site. By 5pm, I’d picked up my rider’s pack and I stood in town eyeing up the mountains in the distance. My wife had declined to travel with me, and so, as a table for one, I had no problem finding somewhere to eat, even if it was a little sad and lonely. What is the point of a nice dinner if there is no-one to share it with?

After grub, I headed back to the tent and got some sleep. It started raining (awesome) and then it stopped. I was camped by a particularly noisy stream which woke me up several times. Stupid stream. Never again. If I can’t get a nice, cool, quiet hotel room, I’m not bloody going.

The first 5km were pleasant enough, a nice casual group ride and then we turn off towards Mt. Beauty and the riders scattered. Some went forwards, some back. I found a rhythm and I tried to stick with it. I didn’t find it a super hard climb, but it was tiring. I don’t think I got out of my saddle more than once or twice on the way up and even then only for a moment or two. By the time I reached the Tawonga Gap, I was tired but happy. I decided to forgo the drink station at the top, knowing that there was another 11kms away (and all downhill). The downhill was great, but controlled, staying under 60km/h all the way.

After a refuel (and a pee), I turned around and headed back over the hill. According to The Climbing Cyclist, ‘the climb from Tawonga South toward Bright is the steeper, but shorter of the two approaches to the Tawonga Gap. Climbing straight away from the turn-off, this climb is quite steep in parts and features a terrific descent upon reaching the summit.’

It may be steeper, but it seemed easier, and it was definitely shorter. (ed. Agreed on all three points) Perhaps it was the refuel, but I felt pretty good on the return climb. I definitely went up faster, with the exception of the pinch just before the summit. This time I stopped at the top, and had a very short break before moving on. In retrospect, with the hardest climb still to come, perhaps I should have rested longer, but I knew there was another, better-stocked rest stop at the bottom.

Again, downhill to the the rest stop, for a bun, some fluids and a stretch. I was almost halfway (63km) with 2hr 53 elapsed. Still on track and feeling pretty good.

About half an hour later, I moved on. I knew things were about to get tough. 25 minutes later and I passed the tollbooths that marked the start of the climb. According to all the maps, profiles and blogs out there, Mt. Buffalo averages somewhere between 4.5% and 6% grade for the climb. I don’t know if my GPS was playing up, but everytime I looked at it, it said 8% or more. I was barely managing 9km/h and I was struggling. I don’t know how far into the climb I first hit the wall, but it wasn’t far. I kept watching the GPS and all I could see was the distance ticking over ever so slowly.

My legs had nothing left, I had nothing left – I had to stop. I pulled over and rested, and took in some fuel. I stretched, I rested, I fuelled some more. When I started up again, I felt a little better, but a couple more kays along the road and the wall was back. I was struggling big time. I’d already completed nearly 20km of 6% climbs and I was fast reaching my limit.

Another stop, with some walking and stretching. After about ten minutes, I got back on and tried again. This time when the wall hit it hurt. Before it was just exhaustion, now it ached too. I could see a marshall up ahead. I reached him and practically fell off the bike. ‘Only 15kms to go’, he said, ‘it flattens out in about 8km for a bit and then it picks up again. A small downhill before the final steep pinch to the top.’

I thought about that for mere seconds, and then decided I’d had enough. I didn’t have enough physical or mental energy to keep going. Perhaps if I’d made it to the first official rest stop and been able to mingle with other riders, I’d have got my head right. But I wasn’t with other riders. I was here, by myself, and I was beaten. My legs knew it and my brain knew it. I decided to turn around.

I enjoyed the downhill of course, and kept some momentum up till the finish. I ended up crossing the finish line in just over 5 hours, but 28km short of the complete distance. I ate and I drank. I sat and I stretched. I mingled.

I tried not to think about it, but it was futile. Could I have gone on? Would I have finished? Was it the mind that beat the legs, or did the legs go first? Should I have waited longer at the rest stops? Did I eat/drink/fuel properly? What went wrong? Should I have done the 130 so that I did the biggest climb earlier, with more in the tank? Every permutation went through my mind and at the end, all I could be sure of was that I wasn’t strong enough. Whether it was a mental or physical strength, or a combination of both, I didn’t meet the grade.

I had my second DNF since I started cycling 18 months earlier, and I’ve vowed to do everything I can never to have another. My last wasn’t of my doing, this one was. I’m resolved – never again.

Take out the hard work, and the ride was beautiful. The views were gorgeous, the organisation was great, the support was fantastic. I’ll definitely be back. I’m going to train better and be better prepared. We have a second car now, so I’ll be able to drive out to Tumba and do some of the Cat. 3 and 4 climbs there. I’m going to make a more concerted effort to trim down – 10kgs lighter will help a lot.

But the best preparation is knowledge. Now I know just how tough the Alpine Classic is. For those of us who aren’t ultra-light power cyclists, the hills are hard. They may not be as steep as some local roads and hills, but they are long and draining. We have a hill locally that starts at 10% and ends at 17% that I can get over everytime now. It’s fiercely steep, but short. The classic is nothing like that.

It’s just grinding away for an hour, then a short break, and then another hour. Then a break, then two  hours. No respite when you’re climbing. Just up.

Have you competed in a cycling event lately that featured some great climbs? Want to share your story? Send your report to Matt at theclimbingcyclist@gmail.com and get it posted on the site.