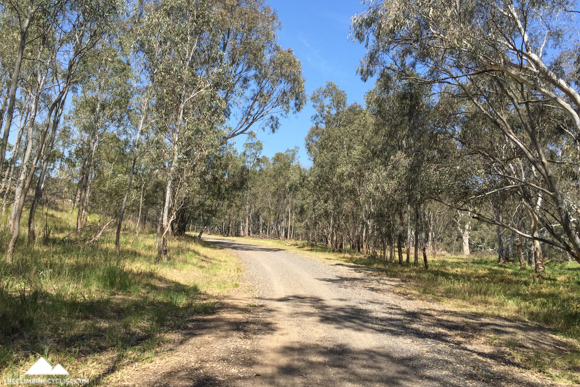 For a few glorious hours on Saturday afternoon I had almost no idea where I was. I’d ridden from my place in Reservoir out to Brimbank Park via the Western Ring Road Trail before arriving at one of the most enjoyable decisions you can make while on a bike.

As I rounded a familiar bend I saw a rough, rocky track winding away into the distance, well beyond the section of the park I was familiar with. My interested was piqued.

“Where does that go?”, I asked myself, almost out loud. I quickly decided to abandon the plan I’d had for the ride; what I needed to do was let some air out of my tyres and follow that tempting, narrow track and see where it took me.

The path disintegrated over the next kilometre or so before plunging me down a steep embankment I’d been skirting around for the past few minutes. The rock-strewn path looked to have a gradient of about 20% — steep enough to make the climb back up difficult if not impossible. But I was committed. I threaded my way down the almost-path until it deposited me out at a considerably flatter, better-maintained crushed-gravel trail.

I looked left and then right. Neither direction looked familiar. A win-win. I set off to the left, a grin plastered across my face.

The trail twisted and turned in step with the river running beside it; a river I had no name for. I didn’t really care where I was and in some sense I didn’t want to know. All I knew was I’d found a part of the world I’d never seen before, and that was enough.

Some time later, my curiosity reaching some sort of peak, I stopped at a trail-side map and got my bearings. I’d headed south west from Brimbank Park, following the Maribynong River and the trail named after it. I’d been planning on turning around and retracing my tyre marks but this new information opened up a different possibility. Why not follow the trail and then, when I’d had enough, swing north east and cut back home that way? Another change of plan, another great decision.

For the next hour or so I wound my way through Melbourne’s north western suburbs, trying to take in as much of my surroundings as I could. “I’ve lived in Melbourne all my life,” I thought to myself, “and yet this part of the city feels completely foreign.” It was just the sort of ride I was looking for; a way to ease myself back into riding.

Some of you reading this might be thinking “it’s the Maribyrnong Trail. Big deal” and I would probably think the same about the Merri Creek Trail. But, for me, even a simple suburban bike track was enough to kindle a sense of exploration and adventure; something I missed over winter.

My exploration bore fruit a short time later with my discovery of the Alpe d’Huezzendon. This hill in Keilor East can be climbed from either side by bike track, each offering some of the best urban switchbacks I’ve seen.

The opportunity to explore by bike is reward enough in itself, but rides like these have an additional benefit.

We all have a mindmap of the world around us. Much like the ‘fog of war’ in a strategy videogame, large chunks of our mindmap are filled in — sections we’ve discovered. Others are hazy, waiting to be explored.

Our mindmap holds information about the way various roads and paths intersect, the views possible along those roads, and what sort of traffic they cover. This information allows to get safely from A to B, or to simply enjoy a pleasant ride on roads we know will carry minimal traffic. Exploring helps expand our mindmap. It helps link otherwise isolated sections of that map, creating routes that mightn’t have been possible or attractive before.

I’d ridden the Maribyrnong River Trail in the past, but only closer to the city. Saturday’s ride helped join that section of my Melbourne cycling mindmap with the Brimbank Park section. I now know it’s possible to ride from the city out to Brimbank Park via that trail and then loop back home that way. Sure, I could have looked that up on a map, but without any reason to do so I wouldn’t have gone looking and wouldn’t have found it.

The process of exploration allowed me to expand my mindmap organically, attaching experiences and memories to that particular section of the world. I’ll always associate that section of the Maribyrnong River Trail with the joy of exploring by bike on a perfect spring day in 2015.

Sometimes a new road or trail might offer nothing but a dead end. But when the question is “Where does that go?”, the answer should always be “Let’s find out!”.

3 Replies to “Exploring, mindmaps and the 'where does that go?' ride”