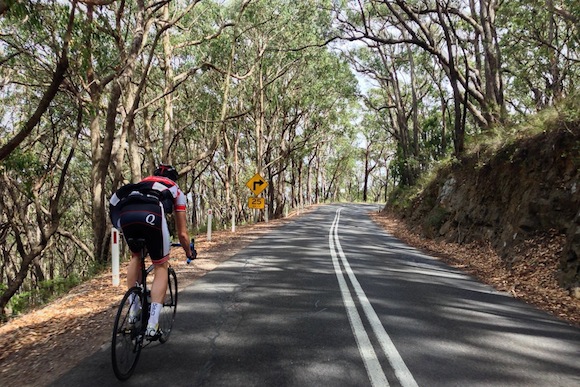 Click on any of the images below to see a larger version.

Last week I had the privilege of heading over to Adelaide to cover the Tour Down Under for CyclingTips. It was a busy week spent watching and reporting on some terrific bike racing and I thoroughly enjoyed myself.

In addition to watching and writing about plenty of racing I also had a little bit of time to get out for some riding of my own. In all I managed five short rides (nothing more than 60km) but crucially I got to head out to the Adelaide Hills to check out some of the climbs I keep hearing about.

This isn’t meant to be a comprehensive list of Adelaide’s many great climbs; rather it’s just my thoughts about some of the climbs I got to try while I was over there.

On our first morning in Adelaide the CyclingTips team got kitted up for a ride and headed north east out of the city. We took a bit of a circuitous route but the main destination was Corkscrew Road.

This now-famous climb featured on stage 3 of this year’s Tour Down Under and saw a blistering attack by Cadel Evans to win the stage and take the overall lead.

Cadel made it look easy as he danced his way to victory, but I found it considerably less easy. In fact I took roughly twice as long to get up it as Cadel did.

Corkscrew Road in its entirety is 3.6km long and it’s more or less all uphill, but the climb proper is only about 2.5km long … at 9%.

It starts off at a pretty reasonably 8% or so but when you reach the actual “corkscrew” section — a series of switchbacks — the going gets quite a bit tougher.

I seem to remember the corners being quite steep (over 10%) and the sections between being much the same. But there are some terrific views to be had towards the top, looking back down on the road you just came up.

I’d love to come back at some point and give this climb a real crack once I’m in good form (and on my climbing wheels). But it was great to get a chance to ride it before the race, to be able to fully appreciate Cadel’s stomping ride.

If the 1 in 20 is Melbourne’s most well-known climb then Norton Summit would have to be Adelaide’s. At 5.5km it’s not as long as the 1 in 20, but it’s average gradient of 5% makes it a touch steeper (as counter-intuitive as that might sound).

I must admit I wasn’t overly impressed by the climb in the opening kilometre or so. You pass through a semi-industrial area as you leave the suburb of Magill and it doesn’t seem like the climb is going to be particularly scenic.

But then you hit a left-hand hairpin after 2km and the views start to open right up. I think I actually said “oh wow” out loud as I rode up there on my own. 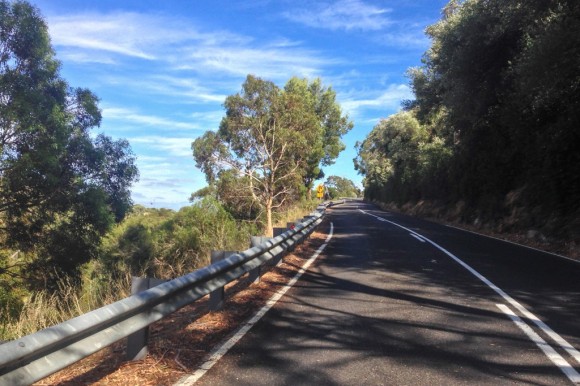 For the next few kilometres the road hugs the ridgeline as it winds its way up into the hills and it’s hard not to ride with your head tilted to the left, soaking it all in.

One thing that struck me about this famous climb is just how consistent the climbing is. The first kilometre feels a little steeper than the rest but after that it’s remarkably consistent all the way up. It just sits around 5% and never really changes until you get to the top.

Speaking of which, I had absolutely no idea where the “top” of the climb was and I probably still don’t. There are a whole bunch of Strava segments for the road but the most popular one seems to be 5.5km long (which matches the old Cycle2max page).

The road actually keeps climbing a little beyond that point but looking at the profile from my ride I can definitely see that most of the climbing was done by the end of that 5.5km stretch. 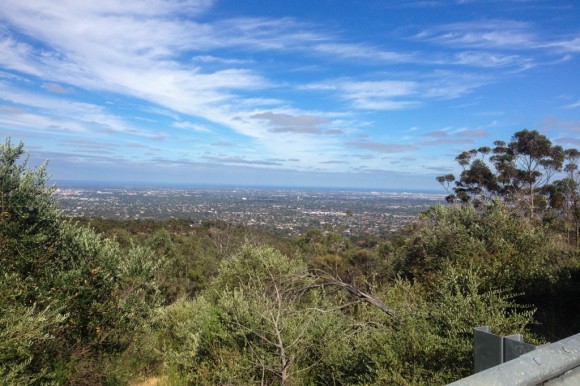 I spent much of this climb admiring the view and taking photos so I’d love to come back and have a tilt at this to see what sort of time I’m capable of.

The climb up the Old Freeway to Mt. Lofty is another one of those climbs I’d heard a lot about and was keen to try. Rising from Glen Osmond to the highest point in the Adelaide Hills I imagine it’s one of the longer climbs in the area — 12.2km at 4%.

The first section of the climb takes you up a bike track alongside the Princes Highway before you’re spat out on to Mt. Barker Road, the old freeway between Adelaide and Melbourne which included the infamously technical Devil’s Elbow section which saw more than its fair share of road accidents back in the day.

This climb isn’t nearly as picturesque as some of the others in the area and it also lacks the consistency of something like Norton Summit so you’re constantly trying to find a new rhythm. I was passed early in the climb by a guy riding quite a bit faster than me and I was feeling good so I decided to speed up and catch him.

It took quite a bit of effort to hold his wheel the whole way up but I’m glad I did. I reached the top of the freeway/Mt. Barker Road section at exactly the same time as my mates Nigel and Fletch — a complete coincidence.

Together the three of us rolled up the remaining few kilometres to the Mt. Lofty observation area — a rolling section with a couple of turn-offs and intersections that would have got me lost had I not been using my Garmin to navigate.

The photos don’t really do the views from Mt. Lofty justice — it is definitely a nice view. It’s a bit like Sky High in the Dandenongs, albeit a little bit higher (I was surprised when I learnt that) and much closer to the CBD. You get a real appreciation for just how flat Adelaide and its surrounds are when you’re standing at the top of the only mountain in the area.

Late last year Adam Williss was good enough to write a piece for the site about the second edition of the Adelaide Dirty Dozen. In it he described the combination of Coachhouse Road and Woodland Way as the toughest climb in Adelaide. When I had one final chance to ride in Adelaide and I was trying to work out where to go, I realised it was a no-brainer — I had to give this one a crack.

The climb starts in suburban Magill and comes off Norton Summit Road, covering the same amount of climbing as the aforementioned climb in half the distance.

If a climb is 2.7km long with an average gradient of 10% you know you’re in for a challenging ride, but it didn’t seem that way to begin with. The climb is effectively comprised of six ramps with flatter sections in between and the first few ramps are actually pretty easy.

I took a right on to Woodland Way and thought “this isn’t so hard”. But the ramps get harder as you go along and the last one kicks to beyond 20%. I managed to get through that last section seated, which I was pleased about, but it certainly wasn’t easy.

Compared to something like Terrys Avenue or Mast Gully Road back here in Melbourne Coachhouse Drive/Woodland Way isn’t all that hard but that last ramp is a pretty fearsome sight and equally tough on the legs.

Of course one of the most enjoyable parts about climbing hills is the joy of riding back down. On my rides I tried to descend different roads to the ones I came up, to maximise the amount of the Adelaide Hills I would be able to see.

The descent from the top of Corkscrew Road down Montacute Road was probably my favourite of the whole trip, just marginally ahead of the descent down Greenhill Road. The views over the city as you hug the ridgeline on Greenhill are just superb and quite unlike anything we’ve got back in Melbourne.

While technically not a descent, Gorge Road was amazing to ride on too. I’d love to head back and ride this rollercoaster it in its entirety but even the small section I got to do — from Torrens Hill Road to Corkscrew Road — was a lot of fun.

I think the thing that strikes me most about the Adelaide Hills is that they are just so close to town. We were staying at the Hilton Hotel right in the centre of Adelaide and within 8km I could be climbing into the Adelaide Hills.

Given I live about 40-45km from the base of the Dandenongs here in Melbourne, the idea of being able to start climbing some great roads within half an hour is massively appealing.

In short, I had an amazing time and even though I wasn’t able to get out for long rides, I still got a taste of the amazing climbing (and riding more generally) that’s on offer in the Adelaide Hills. I’ll definitely be back.

16 Replies to “Cycling in the Adelaide Hills”