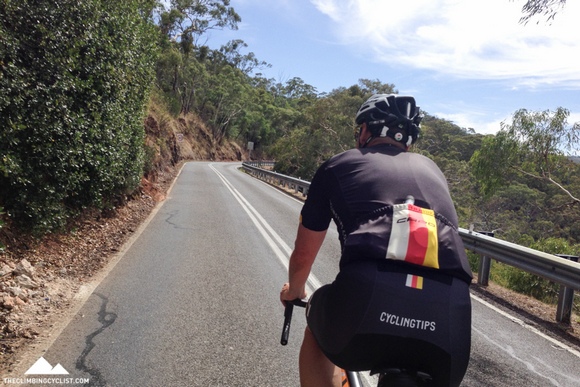 A little more than a year ago, at the 2014 Tour Down Under, I got to ride my bike in the Adelaide Hills for the first time. It was an eye-opening experience — I always knew there were some great climbs near Adelaide but I didn’t realise how close to the city they were. Melburnians: imagine having the 1 in 20 less than 10km from the Melbourne CBD. Yeah. Awesome.

Last week I was lucky enough to head over to the Tour Down Under for the second year in a row, again covering the race for CyclingTips. I took my bike in the hope of getting out and exploring some more of the many terrific climbs in reach of the city.

Unlike last year, where I managed to get out for new fewer than five rides for the week, this time I only managed two short rides (and a run). I was certainly hoping to spend some more time on the bike, but I’ll definitely take two rides over none. Here are the new climbs I got a chance to check out.

Last year I got the opportunity to descend Greenhill Road and it was one of the most memorable descents of the trip, not least because of the city views that open up partway through the climb. This time around I was keen to tackle Greenhill in the opposite direction and see what it’s like as a climb.

As with most of the climbs into the Adelaide Hills east of the city, it’s an uphill approach to the start of the Greenhill Road climb proper. Nothing particularly steep, just a gentle uphill drag that gets you nicely warmed up before the more serious climbing begins.

My inclination would be to go for the middle option, where the climb “starts” just after Glynburn Road and extends for 7.2km.

Like Norton Summit, the Greenhill Road climb isn’t particularly impressive to begin with. You’re climbing through the suburbs of Adelaide with plenty of traffic around and a pretty ordinary road surface in a lot of places. Thankfully that soon changes.

I found the first part of the climb to be the steepest. The road seemed to be close to 10% for much of the opening kilometre or so, but after that it settled down and it was easier to find a more comfortable rhythm.

After a couple of kilometres the traffic seemed to die down as well and then the views started to improve. There’s a terrific vantage point over the city after 2.4km of climbing and the views throughout are actually quiet impressive. I was riding with my CyclingTips boss Wade and we stopped for a handful of photos in this early section. With a tight schedule though we needed to make up some time, so Wade went to the front on the top section of the climb and upped the tempo. Ouch.

This is a climb I’d love to head back and do again at some point, and try to see what sort of time I could do it in. Coming from Melbourne, where you have to travel at least 40km from the CBD to get a climb this long and scenic, it blows my mind that this ascent starts less than 7km from the centre of Adelaide.

As with Greenhill, I’d descended Old Norton last year but this time around I was keen to experience it as a climb.

Like Norton Summit the start of Old Norton isn’t particularly scenic, but it also doesn’t really improve all that much on the way up. That’s not to say that it’s an ugly climb, just that it lacks the amazing views of the upper reaches of “New Norton”.

I found the climb to be quite “rampy” with some sections that were really easy and others that were considerably less so. The Strava profile seems to suggest that the first 3km are reasonably gentle, but from then on it’s quite a bit steeper. I do remember there being some steeper ramps towards the top but the climb is short enough that it doesn’t feel massively challenging.

This is another climb I’d love to come back to and have a real crack at.

I’d love to come back to Adelaide do to some riding at a time when I’m not having to rush off to get to work. There are a number of climbs I’d like to check out when that happens.

Old Willunga Hill is one such climb. Having driven up this hill in the media car on stage 5 of the TDU I can tell you it’s a stunning bit of road. The views out to the left as you climb are just amazing and it would be a joy to ride this stretch of road that has become so famous in recent years.

I’d also like to give Torrens Hill Road a crack. This is the climb on which Rohan Dennis made his race-winning move at this year’s TDU. Having been in the Shimano Neutral Service car on that stage and seeing the carnage this steep ascent caused, I’d love to give it a go myself.

There are so many others, plus I’d love to head back to Corkscrew Road, the Nortons, Greenhill and a few more to see how fast I could do them. It might need to be a long visit …

16 Replies to “More cycling in the Adelaide Hills”