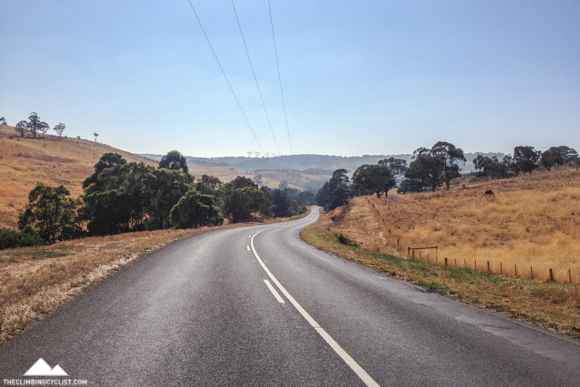 I’ve enjoyed cycling for all of those reasons at one time or another but there’s perhaps one aspect of cycling I enjoy above all others: being able to explore and see parts of the countryside I haven’t seen before.

There’s really no better way of seeing the world around you than from the seat of a bike. The world goes past slowly enough that you’re able to take it all in and appreciate your surrounds while still covering enough ground in a reasonable amount of time.

Living in Reservoir, in Melbourne’s outer northern suburbs, it’s fair to say I don’t have immediate access to Victoria’s most scenic roads. The Dandenongs are a solid 45km away, Kinglake is about the same and for both of these options there are plenty of busy and unappealing roads to get through before I can fully enjoy myself.

For this reason I often find it hard to get motivated for a ride.  But one thing I’ve found motivating in recent times has been the promise of exploring new roads and new regions. If I know there’s something new and interesting to look forward to in a ride it can help to provide that initial burst of motivation that’s needed to get me off the couch.

In the past week I’ve done a couple of different exploratory rides, both in Melbourne’s outer north west.

There’s a bike track that runs alongside the Western Ring Road which, at just a few kilometres from my house, gives me easy access to a few parts of Melbourne that would normally require riding on some terrible roads. The Ring Road trail also links up with the Merri Creek Trail which heads in towards the city, but that’s a topic for another post.

Looking at Google Maps one day I saw that the Western Ring Road Trail passes right by Brimbank Park in the suburb of Keilor. And looking at Strava’s ‘Explore’ page I was able to see that there are a number of short but interesting-looking climbs within the park.

With little more planning than that I headed out to Brimbank Park via the Ring Road Trail (a roughly 20km trip) last week and spent an hour or so exploring the many paths and trails within the park.

There was something so simple but enjoyable about visiting a new area and just riding wherever I felt like, finding new climbs and just getting away from the same old roads I always ride. The joy of not having to worry about motorised traffic shouldn’t be underestimated too.

And last weekend I found myself looking for somewhere different to ride once again and I remembered a one-way ride I did early last year from Reservoir to Trentham. On that ride I went along Wildwood Road, just south east of Sunbury, which includes a lovely little descent into a gorge before a short but challenging climb out the other side.

I discovered that climb completely by accident on that Trentham ride but last weekend I thought I might see if there were other similarly enjoyable roads in the area. I headed to Strava and mapped out a route that took in a loop of Wildwood Road and Konagaderra Road, noticing that the second of those roads seemed to feature a nice little climb as well.

The ride out there was awful — avoid Cooper Street/Somerton Road at all costs, people — but once I got beyond the reaches of Melbourne’s outer-suburban industrial sprawl the country riding was terrific.

Konagaderra Road was great, with a fast and flowing descent (see feature image above) before a challenging climb out the other side. And it was just enjoyable to be riding on a road I’d never heard about, relatively close to home.

Perhaps the most satisfying part of the day was riding along and seeing other interesting-looking roads that I’d love to head out and explore some other time, such as Bardwell Drive or Gellies Road.

The thing I love about exploratory rides is that you’re really only limited by the amount of time you have and your own sense of adventure. If you’ve got all day, why not just start riding and see where you end up? If you see a good road, head down it. And at a pre-determined time (or just whenever you feel like it) find out where you are then pick your way back home.

My good mate Andy from Hells 500 describes these sort of outings as Forest Gump rides, named, of course after the scene in the film Forest Gump where the lead character just starts running … and doesn’t stop until he gets sick of it.

These sorts of rides are particularly satisfying in areas you haven’t explored before, such as when you’ve travelled interstate or internationally with your bike, or even if you’re just somewhere away from home where you wouldn’t normally ride.

It might be that you’re out for a ride and you’ve got a destination in mind (it might even be a one-way ride) but if you’ve got the time, why not find a different way to get there? Keep track of the direction you’re heading lest you end up in completely the wrong place, but take the time to try new routes to help mix things up. You can even do this with your daily ride to work, to make it feel like less of a chore.

And then there’s the more structured exploration option. Tools like Google Maps and Strava’s ‘Routes’ functionality (not to mention a whole host of similar tools) allows you to map and plan a ride in as much detail as you like.

Spend some time creating a route that uses roads you’ve never ridden before and if you want to get a sense of where the best roads and climbs are, use Strava’s ‘Explore’ functionality. With Strava’s ‘Routes’ tool you can upload the finished map file directly to a Garmin cycling computer to give you step-by-step directions while you’re riding.

Sure, a planned route doesn’t give you the same feeling of freedom or spontaneity as a Forest Gump ride, but it still gives you a chance to see roads you mightn’t have yet ridden, all without the hassle of getting lost (although that can be part of the fun too!)

All of this might sound pretty obvious, and it is. But taking this sort of approach has helped me to stay motivated on the bike and allowed me to find ways of keeping my cycling fresh and interesting. I hope it helps you too.

15 Replies to “The simple joy of exploration”