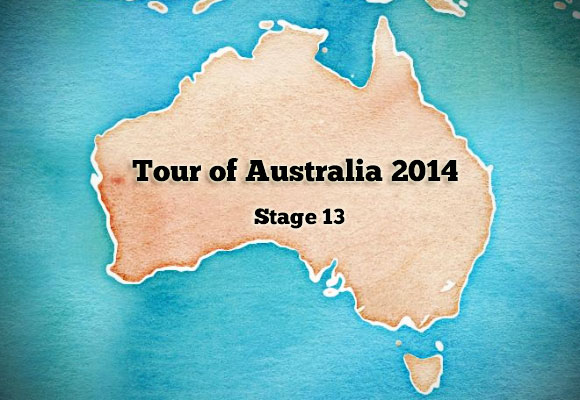 Inspired by the Giro d’Italia, the Tour de France and the Vuelta a Espana, the Tour of Australia is a fictional three-week Grand Tour route created by David Blom and Matt de Neef to showcase some of Australia’s best cycling roads. This is the second year of the race and today we reveal stage 13 of the 2014 edition.

Stage 13 starts the way stage 12 finished: with a big chunk of flat road as the race heads south. On this particular stage, the riders head south out of Wangaratta towards the King Valley, reaching the town of Whitfield where an intermediate sprint will be contested after 50km.

Immediately after passing through the sprint point the riders turn right on to Mansfield-Whitfield Road where the first of the day’s two categorised climbs begins. From Whitfield through Whitlands and up to the top of the second category climb it’s roughly 13km at a touch over 4%. There’s a bit more climbing between kilometre 68 and 76, but it’s reasonably gentle and rolling.

After 76km the riders start their descent towards Mansfield, passing through the small town of Tolmie. They reach Mansfield after 110km where the day’s second and final intermediate sprint point is contested, before starting the run east towards Mt. Buller.

The road trends ever so slightly uphill for the 30km from Mansfield to Mirimbah from which point the day’s final climb begins. The ascent of Mt. Buller is roughly 15.3km at 6% with the stage finishing at the entrance to the Mt. Buller Alpine Resort.

With flat roads between the start of the stage and the first intermediate sprint point, you might see the teams of the points classification contenders controlling the race to begin with. That first sprint point provides an opportunity to snare a few bonus points before the climbing begins.

If a breakaway hasn’t formed by the first climb it certainly will at that point, with the peloton likely to be thinned out quite quickly as well. The Whitfield climb isn’t particularly steep, but it’s long enough and steep enough that many riders won’t be able to stay with the GC contenders and other good climbers.

There’s nearly 80km between the top of the first climb and the start of the second — plenty of time for riders to catch back on if they were dropped, assuming they’ve got the legs and the support. The flatish 30km from Mansfield to Mirimbah certainly gives the peloton an advantage over a smaller escape group, and if the GC contenders feel like bringing back the breakaway, they should be able to do so.

The 15km climb up Mt. Buller to end the stage will likely have an effect on the general classification and you can expect the best climbers to make their move in the steepest section of the climb — the final 1.5km. But even if time gaps are created on this stage, there’s still more than a week of racing after this stage and just about anything could happen in that time.