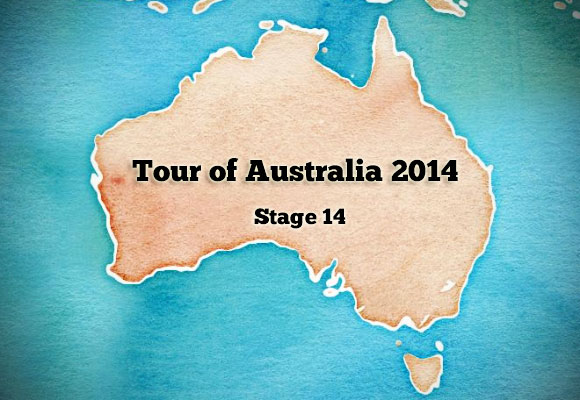 Inspired by the Giro d’Italia, the Tour de France and the Vuelta a Espana, the Tour of Australia is a fictional three-week Grand Tour route created by David Blom and Matt de Neef to showcase some of Australia’s best cycling roads. This is the second year of the race and today we reveal stage 14 of the 2014 edition.

After passing through Mansfield on their way to Mt. Buller on stage 13, the riders return to the town for the start of stage 14. There are a few short climbs in the opening 35km of the stage as the riders head south out of Mansfield, but nothing long or steep enough to warrant a categorised climb. But when the race hits Jamieson, the riders take a right-hand turn on to the Eildon-Jamieson Road to begin the first of the day’s proper climbs.

Mt. Terrible rises at an average of 6% for 8.9km with the second category climb topping out after roughly 42km of racing. The descent off the other side of the mountain is truly stunning, as is the entirety of the Eildon-Jamieson Road which runs from kilometre 33 to 86.

Along the way the riders will also tackle the second climb of the day, a third category ascent which rises at 3.5% for 8.9km and tops out after roughly 70km of racing. After roughly 10km of riding along a rolling plateau, the riders start the fast descent towards Eildon where, after 89km, the first intermediate sprint of the day will be held.

From Eildon the race heads west to Thornton (at 100km) and then south west to Taggerty (113km) with a small bump of a climb between the two towns. At Taggerty the race turns south, heading down Maroondah Highway to Buxton (124km) where the course veers to the left in the direction of Marysville. This run from Taggerty to Marysville is ever so slightly uphill but feels flat, and after 135km, on the outskirts of Marysville, the second and final intermediate sprint of the day will be contested.

No sooner has the intermediate sprint point been passed than the riders are on to the third categorised climb of the day: the first half (and the steepest half) of the Lake Mountain climb. It’s 9km at 6.6% all told, with an opening section of 4.5km at close to 10%. The first category climb tops out after 140km after which there’s a short descent before the next climb: 2km at 8.1% (fourth category) to the Mt. Arnold Saddle after 144km.

From here it’s mostly downhill for 25km, down the stunning Reefton Spur, before turning right and following the largely flat Warburton-Woods Point Road for 18km to the town of Warburton.

A right turn after 190km signals the start of the Mt. Donna Buang climb, which, after 16.8km of steady climbing at 6.4%, takes the riders to the end of the stage.

On stage 14, for the first time in the race, the riders in the 2014 Tour of Australia will have to face their second consecutive summit finish. But before they get there, they’ve got the four earlier climbs to contend with.

Eildon-Jamieson Road probably suits a breakaway quite well, with its many ups and downs and near frequent winding meaning a group up the road will be quickly out of sight. For the riders who are looking to contest the KOM classification this might be a good stage to get in the early breakaway — with four climbs on offer before the finale there are plenty of points to be had.

That said, the long flatish section from Eildon to Marysville could work against the escapees with a bigger group able to move faster than a smaller group.

Expect fireworks on the final climb up to Mt. Donna Buang with the general classification riders looking to take time off each other ahead of the final week of racing.

For the sprinters and other non-climbers, it’s a day to settle in to a rhythm in the grupetto and simply focus on making the time cut. That said, there aren’t too many flat finishes left in the race …