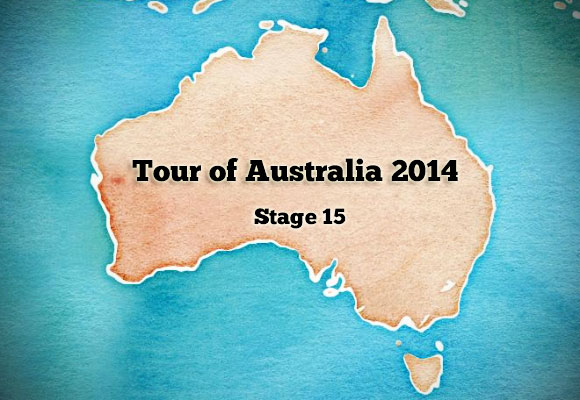 Inspired by the Giro d’Italia, the Tour de France and the Vuelta a Espana, the Tour of Australia is a fictional three-week Grand Tour route created by David Blom and Matt de Neef to showcase some of Australia’s best cycling roads. This is the second year of the race and today we reveal stage 15 of the 2014 edition.

Click here to see the route and profile at Ride with GPS.
After the summit finish at Mt. Donna Buang the day before, stage 15 of the 2014 Tour of Australia starts at the base of that mountain, in the town of Warburton. From there it’s out along the normally traffic-heavy Warburton Highway to Wandin North where the riders turn off and approach the Dandenong Ranges from the north.

From Montrose at the 35km mark the riders take on one of the longest sustained ascents in the Dandenongs (8.5km at 4.3%), climbing up the Mt. Dandenong Tourist Road to the second category KOM. From there there’s a short descent and some more climbing to Olinda before the riders continue following the Tourist Road all the way down to Ferntree Gully after 56km.

The race then heads east up Burwood Highway through Belgrave before the second of the day’s categorised climbs through Selby: a 3.9km third category climb with an average gradient of 4.4%. This tops out after 63.3km after which the riders pass through Menzies Creek, Emerald, Avonsleigh, Cockatoo and then, after a long uphill drag, Gembrook, where the first of two intermediate sprints is contested after 81.7km.

From Gembrook the race heads south, descending out of the Dandenong Ranges towards Pakenham. Through a series of southbound sections and westbound sections, the riders head out to the Mornington Peninsula, passing through the second intermediate sprint point in Pearcedale after 134km.

The run down the Moorooduc Highway and Boundary Road is fast and largely flat with the day’s final challenge beginning after roughly 170km. The climb to Arthurs Seat is 3km long at 8% with the stage finishing at the top of the hill.

You probably wouldn’t expect this to be a stage that the general classification contenders would be targetting. The final climb to Arthurs Seat isn’t long enough to put serious time into each other, but then again Grand Tours have been decided by a matter of seconds in the past.

It’s possibly a stage that best suits the climbing opportunists. The ones that can reach the bottom of the climb in good position and that can climb away from the main field and other climbers.

Expect a breakaway to get away on the approach to Mt. Dandenong and to hold that advantage until the flatter second half of the course. The long stretches of flat road in the closing kilometres should make it easier for the peloton to catch an escape group, or they could be left to stay away, who knows.

Either way it’s bound to be an exciting stage and, being on a Sunday, one that’s sure to attract a solid crowd not only to the Dandenongs, but to the finish at Arthurs Seat.